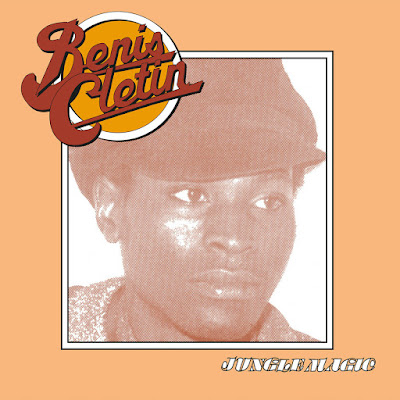 Full scale Afro-disco heat here on reissue machine PMG, opening with the mindblowing title track. Benis Cletin’s dog-rare 1979 cut “Jungle Magic” lays a warped synth over a lethal bassline and a slow Afro-disco groove, topping the whole thing off with a unique homage to Donna Summer... Originally released on Afrodisia records in 1979, the result sounds like the the confused love-child of a time-travelling Derrick May and a Nigerian disco queen - timeless eccentricity that you won't be able to resist. From there we traverse through Moog topped funk, village disco and hypno groove, all fusing the organic African sounds with the electronic. If you're looking for that wonky early doors cut to get the crowd moving in the most peculiar way, I'd suggest you turn your attention toward the oddball, AORfro funk of "Fireman".

Patrick says: If you're looking for a psychedelic stormer which sounds a bit like a Nigerian cover of "House Of The Rising Sun" but with squirmy Moogs and Donna Summer style vocals - then you're in luck. "Jungle Magic" is a gorgeous LP of dreamy African textures led off by that massive title track!

This 1979 Nigerian cut somehow contains dark proto-acid squiggles that would captivate Derrick May, a weirdo chant about "jungle magic" that could hypnotize Lee "Scratch" Perry, and a wonky clavioline (?) honk that could mate with geese. We then have Cletin singing a type of "superstition" that outstrips Stevie Wonder's own black magic funk as man, woman and child all change into beasts within the song. Uh…what? (Exactly.)

Regarded as an acid boogie classic, Jungle Magic is a cosmic transmission from the early days of Nigerian disco. The bass lines are lethal. The synths are fat and squelchy. And the groove is non-stop and primal.

Channeling the jungle gods of funk and introducing them to Donna Summers, the title track, ‘Jungle Magic’, takes you to a freaky place you didn’t know existed but never want to leave. ‘Love Forever’ brings a Calypso party vibe while ‘Fireman’ suggests Prince may have been listening to Benis when he wrote ‘Alphabet Street’.

The album was composed and produced by Benis Cletin. He also played guitar and synthesizer and sang lead vocals. George Achini from the Mighty Flames stars on bass and Mambo Sticks, Nigeria’s leading disco drummer, lays down the rock solid grooves.

Benis went on to release three more albums, two of which will be re-issued by PMG soon. Jungle Magic remains the album where he introduced his irresistible brand of psychedelic disco funk to world.

A1. Jungle Magic
A2. Mr. Teacher
A3. Rain, Sun And Love
B1. Love Forever
B2. Fireman
B3. Beautiful Continent
Posted by mr. follow follow