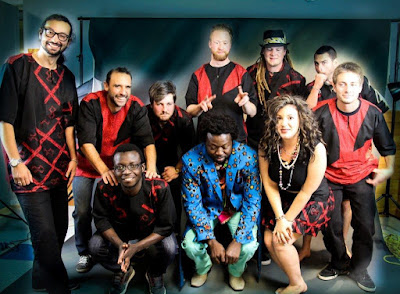 Kárà-Kátà Afrobeat/Highlife, Afrobeat reggae Group music genre can be called world but we blend effortlessly original Afrobeat, Afrobeat Reggae, Soca, Calypso, Afrobeat gospel, Modern funk, Jazz, Blues, Salsa, Psychedelic rock & Soul. Our musical spice is exotic and inspiring. We celebrate and share the beauty of African/Canadian multiculturalism with dance, music, fashion through our live performances. Although the music is African Origin, but we are 90% of different backgrounds and origins and 10% African. We are truly the world beat.


The exciting new Afrobeat group here in Vancouver that goes by the name of Kara-Kata. Like traditional Afrobeat bands, we are composed of a wide range of talented musicians including several percussionists, a vibrant brass section, and guitars and keyboards. We also have a contingent of dancers who can fire up a crowd in seconds! Our shows over the past few months upstairs at The Afrika Shrine, Legion Hall on Commercial Drive have drawn strong and enthusiastic audiences and the word is definitely out that there is FINALLY a band here in Vancouver that can bring the music of Fela Kuti and the spirit of Africa to life on stage! Our music combines elements of funk, highlife, African rhythms, and jazz.

What Fela developed is now recognized as having been exceptionally unique. The sound rides on insistent Yoruba rhythms with funk-influenced organ riffs in the middle topped by repeated chants that link his music to that of traditional Nigeria. (Excerpt from BBC documentary from the 80s)

This is what is behind the spirit of Kara-Kata and what we try to project.


FORGING AHEAD WITH AN AFRICAN VISION

A big bonfire of a band by the name of Kara-Kata is setting Vancouver ablaze with its full-power renditions of classic West African Afrobeat tracks. Afrobeat music blends the genres of funk, jazz, highlife, psychedelic rock, juju, agidigbo and other traditional rhythms into a whirlwind of ecstatic sound. The band is jamming the dancefloor and getting hips swaying to a frenetic tribal pulse. Their recent performances on Commercial Drive in Vancouver have been generating tons of buzz. Once a month they transform the staid Legion Hall into the bedazzled Afrika Shrine where the vibe is festive and traditional Nigerian dishes are served to hungry fans, resulting in a robust community spirit.
Afrobeat music is the kind of thing that “creeps deep into you as you listen to it,” according to the band’s founder, Toyinirawo Kayo-Ajayi (Kayo). Before you know it, your body is already dancing way before your brain considers doing so. There is a certain spirituality in the music as well, based on traditional African rhythms that are not found in Western music. There’s more behind the sound than just “the jiving psychedelic feel” that is normally associated with it. There is a truly magical undertone to the beats and melodies that comprise these songs, a magic the audience definitely picks up on.

The Afrobeat sound originated from Yorubaland in Nigeria. Both Kayo and the godfather of Afrobeat, Fela Kuti, share the same Yoruba background. Growing up, they were both exposed to the same local traditional songs, chants and rhythms performed during celebrations and ceremonies. It is this rich musical history that many, if not all Afrobeat songs are based upon. Kayo’s memory seems to border on prodigious when he proclaims he can literally recall hundreds of traditional songs from his childhood. “There is now this vast library in my head to draw inspiration from,” he remarks.
Kara-Kata’s first self-titled EP released last year is worth listening to for its lively rhythmic tracks although it hardly reflects the remarkably speedy evolution and sophistication of the group’s current bombastic sound. The group has swelled in size to almost 20 members over the last few months. Whereas they were once playing primarily smaller intimate venues and festivals in the area, the venues and crowds are growing in size alongside the group as the outbreak of Afrobeat fever spreads throughout the city.

Kayo has managed to skillfully orchestrate this ‘big family’ and keep the performances incredibly tight without it degenerating into a chaos of noise: “This music is like a meditation, and that’s why we can have such a large group onstage, all of us on the same page, totally connected. It’s not difficult at all actually. When I raise my hand or gesture in a certain manner, they know what’s coming because we are all connected. When I am onstage and people see me caught up in the music, entranced, dancing, totally into it, they cannot help but join in. It instantly connects people.”
Kayo formed Kara-Kata here in Canada in response to what he considered was a shortage of the pure version of this particular sound. “I just want to have fun with it and share my tradition and love of this music with my fellow Canadians,” he notes playfully. When asked what he sees on the horizon for the group, Kayo waxes philosophical. “We’ll end up wherever the universe takes us. We’ve come so far in such a short time, and where we are headed, no one knows, but wherever we find ourselves, I know we will be truly happy.” 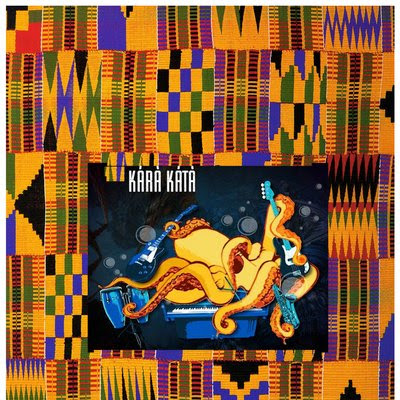