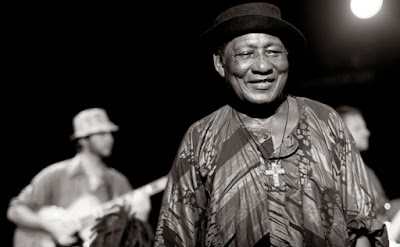 Conquering lion of Highlife Music, Ebo Taylor has truly seen it all and done it all. The 83-year-old Saltpond based musician, songwriter and composer is just about to begin another world tour as he promotes his latest body of work. The 9-track album titled, Yen Ara, released via Mr Bongo in march of 2018, sees him translating various knowledge bases encoded in traditional Fanti music in contemporary Ghanaian highlife as well as experimenting with certain new rhythmic forms through signature, horn-dominated composition. The album, eagerly anticipated and brilliantly received so far is another stroke of Ebo Taylor’s genius.

At a very comfortable 41 minutes, the album begins with Poverty No Good, introduced by a solemn and choral admonition of poverty. The song, one of which Ebo Taylor composed and arranged, then roars into life with the rolling drum loops metronomed by a muffled conga and brazen horns sections, bridged by Ebo Taylor’s Pidgin English verse on the impossible nature of living with poverty. The charged tempo of the song counters the patient melody he creates with his voice and sets a tone of blending and mix which is consistent through the tape.

The next few songs, however, slope towards more polarized dance-friendly highlife and afrobeats. Mumundey for instance, feature this rousing war-like call and response refrain, sandwiched between rousing trumpet solos, one of Ebo Taylor’s well-known fatality moves. Track 3, Krumandey is more of late 70s disco and funk with a feel good atmosphere that slaps the rhythms onto listeners. The entire song rests on the strong shoulders of this punchy electrifying horns sections that season the vocals of Ebo Taylor’s son, Henry Taylor, whose strong voice rises above the cauldron of bliss on this song. It easily one of the stand out cuts on this tape.

Abenkwan Pucha, however, is the crown jewel of this album as it perfectly syncs the two critical phases of Ebo Taylor’s composition: i.e. the more traditional vocal highlife, brewed from Palmwine Music, to his jazzy funk phase which has become his signature in the African music pantheon. The song has this freshly ground feeling of warmth with yet again, the kinetic and tender horns section, as well as Tony Allen style drum pattern as Ebo Taylor in his aged, raspy voice appears to be using palm nut soup as some grand metaphor.

For casual or first time listeners, this project is by far a huge pool of highlife bliss to dive into as it partially traces the contours of this very Ghanaian genre, showing how the sound has evolved from the palm wine days, through funk and disco to the experimental, electro-based, burger highlife days. It also exhibits Ebo Taylor’s brilliance as a composer. The entire project feels well round with no gagged melodies and unessential phrases taking away from the overall sounds. Ebo Taylor along with the Saltpond City Band and producer Justin Adams, brilliantly engineered soundscapes for the narratives, with the trusted horn section as the pillar upon which the entire sonic architecture is arranged.

However, this is same compositional level, is where the magic that elevates this body of work happens. Despite having a uniquely homogenous sounds, certainly elements do stick out. A considerable chunk of the composition on this album have already appeared on previous bodies on work. In an interview with Afropop Worldwide, Ebo Taylor does admit to repurposing these classics and playing around with certain compositional element to make them fresh for today’s world. In the same interview, he also mentions the another chunk of the album came from songs sung by various Asafo troupes. “We try to get it into a danceable form, while keeping its history”, Ebo Taylor says in the interview. The Asafo, a group of warriors in Akan communities are one of the sub-set of Ghanaian culture that instrumentalize song. Ebo Taylor, shamelessly borrows some of their melodies and rhythms in composing this album. By so doing, he also documents and records this custom that seems to be fading away.

Yen Ara represent one of the final iterations on a quest to perfection. By dedicating his life to the music, Ebo Taylor has worked religiously to achieve what could be a near perfect sound. Not only does he achieve this on this album but he also pays homage to Fanti culture and how the communal use of music to lubricate daily chores is the main ingredient in his sonic composition. Through Yen Ara, the Asafo tradition of music remains alive, although it should make you pause and think about the current state of communal Ghanaian musical culture.

The horns breaking through the beautifully composed opening track is akin to the sunshine through a cloudy day. The effervescent jingles of the music is irresistible and blissful. Drenched in both hyper-energy and mellow grooves, Ebo taylor and his Saltpond City Band delivered one of his most albums in his catalogue.

The 81 year old indefatigable musician is a known pioneering figure within the afrobeat circles and highlife music in general.

”Yen Ara”, his latest project is a live recorded album produced by Justin Adams. The live recording session took place at the Electric Monkey Studio in Amsterdam. The themes on the album bothers on tradition, culture, life and heritage.

Here’s a track-by-track breakdown of the album.

A call and response song with a pidgin title. It carries a triumphant horn section with adowa rhythms bubbling across the song. ‘In this man’s world, life’s is how you make it, no 1 wants to be poor’; his old voice echoes before the Fante phrase ‘ohia be y3 ya (poverty will be painful) shut shop on the first verse.

Ebo Taylor sings in both Fante, English and pidgin. The poignant message in this song is: don’t be poor; strive for riches.

The song opens with a famous phrase made popular by Gyedu Blay on ‘Simigwa Do’. Ebo Taylor compares himself with the handsome and dapper character-who rocks good clothes and sunglasses- with himself and his family members. The afrobeat elements are as boisterous as ever.

From the lyrics, one is left thinking ‘Krumandey’ as a type of dance. He urges all ‘little children to play the game’. Perhaps it’s an old game popular during his young years. It’s sound like a plea to go back to picking some of the traditions of old as well.

The uptempo tone of the three previous songs wanes, paving the way for this mid-tempo tune. Soulful horns open the song. The vocals are gentle and soft. This song talks of the need to cast away a spell with Aboa Kyirbin which he describes as a worm eating creature.

The song, like many highlife tunes carry a philosophical depth. Aboa Kyiribin refers to a type of poisonous snake. Employed as a metaphor to reference how the deeds of people is harming this country, Ebo Taylor calls for the snake that is now feeding on worms (a very strange happening) to be sacrificed to cast away the ills bedevilling the country.

This point is validated by these lyrics (translated from Fante): fellow citizens, we need to sacrifice aboa kyirbi (snake) to cast away a spell. This call elicit a response from his singers: ‘my country Ghana drenched in tears. ‘’Abro Kyirbin’’ qualifies as both a political and social call for the right actions to be taken to ameliorate the sufferings we have contributed in creating. Unlike other songs that plays to end, this ends abruptly.

Mind Your Own Business

This song picks up from the up-tempo vibrations of the first three records. You hear the emotive guitar works of Uncle Taylor who, after a minute of renditions of danceable rhythms, repeatedly sings ‘don’t let my business be your business because ‘I’m too strong for you. So please don’t judge me’.

He’s preaching about ignoring criticism and living your life: ‘All which you think is my downfall, but blessings dey drop like rainfall/music is my weapon and I’m doing what I want’. The guitar chords after the second verse and the horn section is as gentle as it can ever get.

The simple sing along chorus reminds me of another beautiful composition by now defunct Marriot International Band in the mid-90s with same title.

Song title translate from Fante to English as ‘lonely person’. Derived from a popular wise saying, he highlights the plight of the lonely person in this world as the lines of the song reveal: ‘I’m a lonely man, who’ll help or speak for me when I’m in trouble’. The lonely man doesn’t have friends or family to support him and mostly the society shuns him.

‘’Ankona’m’’ has a jazzy- highlife feel. His singing evokes a tone of sombreness. The instrumentation accompanying this song is mellow and swingy. The guitar riffs from Ebo Taylor whizzes across the soft percussion drums with grace. The pain in his voice can’t be missed.

Now, this song celebrates one of the most prominent soups on the menu list in many Ghanaian homes. ‘Abenkwan’ refers to palm nut soup. On the song, he describes a mouth-watering palm soup with beans, mushroom, akrantie, crab, snail, okro as essentials. This song validates the ‘fante-ness’ of Ebo Taylor- he loves good food.

The mini-climax of the beat at the beginning; the bassline that reverbs across momentarily; the long solo horn section permeating across the serenity of the drums without any disturbance. All these coalesce to hand “Yen Ara”, the album title its grace.

“Yen Ara” (We) is an ode to his hometown of Cape Coast-a historic town in the Central Region with the crab as a symbol. It is said that, the 17 clans of Cape Coast (known locally as Oguaa) won a battle against thousands of men- a reference to their victories against the Ashantis during the colonial era.

It’s a song that reflect the history and formidability of the people of Oguaa. Yen Ara is the shortest song on the album. It plays for just 3 minutes 11 seconds.

‘’Abaa Yaa, come here. She has a University education. Unbeknownst, she can’t speak Fante’’. These are the opening lines on Uncle Taylor’s closing song “Abaa Yaa”. He pivots two scenarios to capture what he thinks is an erosion of our tradition and culture, including our language. He cites how a lady-Auntie Lizzy- finished basic school yet can’t speak Fante (her local dialect). Abaa Yaa is actually a remake of an old tune with same title, found on his ”Life Stories: Highlife and Afrobeat Classics 1973-1980” release.

Contrasting these scenarios with the action of a proper Englishman who drinks tea with fried plantain balls. For Ebo Taylor, we should safeguard our culture and identity. This theme has been a favourite of his and seem to be borrowed from his song ‘Ohy3 Atare Gyan’.


“Yen Ara” is a well-conceived and excellently executed album with variants of musical influences he has been part of since he began some six decades ago. It shares elements of highlife, afrobeat, jazz and swings within the scope of mellow, mid-tempo and high tempo rhythmic detonations.

His style of blending his mother tongue of Fante with pidgin and English is indicative of his desire to keep it both Ghanaian and African as well as global.

The performance by his band, Saltond City Band- a handpicked group of musicians including two of his sons is as entrancing as the overall work on the album. 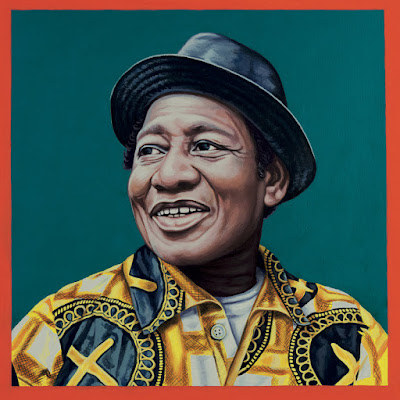