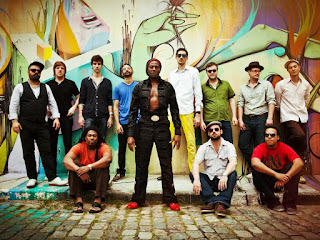 The Brooklyn-based afrobeat group, Antibalas, have just released their seventh full-length LP – Fu Chronicles. The project is inspired by vocalist/percussionist, Amayo’s, early fascination with martial arts, hence the “Fu” in the title. As something dear to him (he has his own dojo) and formative to his childhood, he wanted to incorporate it into his music. With a humble six songs and a runtime of 48 minutes, it’s downright groovy. For the expunging of bad juju or a quick pick-me-upper, this album leaves one in a state of pure rapture.

From the outset, some fuzzy ambient synth riffs mosey in to commence, some guitar follows, adding a light, playful dynamic, until suddenly the auditor gets jolted with a gushing entourage of sound – drums, xylophone, synthesizer, sax, trumpet, congas, bass, even trombone. That’s a damn orchestra.
Once the sound acclimates, the vocals seem to stand as being just as formidable, making this group a veritable powerhouse sans shortcoming. The interplay between vocals and instrumentals is perfectly complementary as one’s tempo matches the other seamlessly as it slows and speeds. Nearly every track opens with some introductory scale to gradually snowball speed into reverberating orgasm after another. Crescendo-aficionados will surely lose their minds over every track. What makes this possible are these mammoth Sinatra-like swings on horns that nearly enchant you into dancing. It’s also accompanied by the funky chops and subtle honey-butter chords of the guitar to keep it mellow and smooth in the diminuendo.

Sprinkled throughout the album are improvised, panicked sax screams that add frenetic energy to the album to counter the mellow mood. Antibalas keeps it spicy and on its toes. They even get a little sagacious in the third track, “MTTT, Pt. 1 & 2,” when the vocalist presents the audience with an African proverb and then ends prophetically with “time is the ultimate judge.” Even lyrics like “flower is power” and “the end is the beginning” appear in the final track “Fist of Flowers,” in which it feels like the audience as the fighter-character has come out of their trials as victorious having won the elusive prize of wisdom. It’s really like stepping into an ultra-pixelated hand-to-hand combat joystick-videogame.

“Fight Am Finish” is where you can really hear the martial arts influence seeping through. The track seems like it’s generating the final boss fight through sound as if Player One starts cutting through the first horde of the boss’s guard. The vocalist announces, “round one!” signified by a gong, then Antibalas guides listeners through the moves of the character by orchestral sound, then bellows “fighter finish!” The album even makes use of some campy-whiplash-punching sound effects that are present on “Fist of Flowers.” So, gold star for that.

Overall, the whole album sounds like the soundtrack to an old fighting arcade game your dad used to play before he met your mom. Antibalas is the prototype of those arcane bands that seem to be only discoverable through a long pedigree, divine intervention or simple serendipity. So, look no further, lover of Afrobeat and Kung Fu, serendipity has just found you, or, better yet, roundhouse kicked you square in the temple. 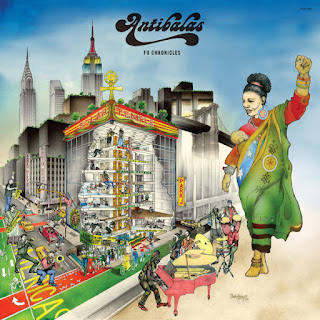 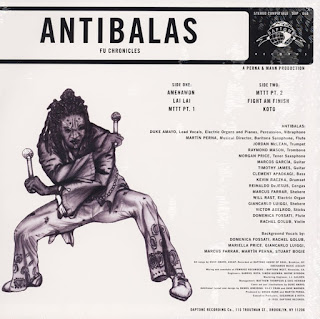