It is hard not to be distracted by the striking graphic art on this great album cover. I am not sure that the 1969 launch of Apollo 12 remained uppermost in the minds of South African music lovers in 1972, but the local urban fascination with many things American is very much in evidence here. 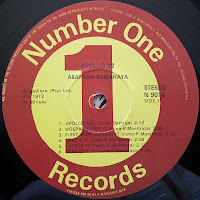 Marketing and imagery aside, Abafana Basekhaya (The Home Boys) deliver a clean, almost contemplative, stripped-down and catchy collection of languid saxophone-driven instrumental mbaqanga. This album is very much in the mould of this earlier minimal mbaqanga posting on the same Number One label - Sea Water.

All the tracks on this album are credited to Tom Vuma and P. Manthata, except the first, "Apollo No 12", which is credited to R. Sathige. The band members are not identified.

"Apollo No 12" and "Going to the Moon" are perhaps my favorite tracks, for their  looping, lilting, sassy swaying effect - kind of, I have consumed too much to dance too energetically, but these tunes do keep me wanting to keep on shuffling on.

I might yet make myself a t-shirt with this cover image, and the "Moon Fever" cover to follow in the future.  Many thanks Burgert for giving me this album. Do Enjoy!

GET IT!!!
Posted by Anonymous