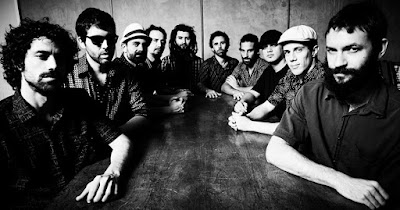 Third album from this 10 piece Brazilian outfit and they are sounding ever stronger and more confident in their music and their ability to stretch out and jam.

Heavy horn sound coupled with pounding and insistent percussion – they take cues from Fela Kuti’s Afrika 70 – but versatile and fluid as well.

The playing is superb, probably not a weak link among them and I particularly enjoyed Cris Scabello’s guitar work – light and melodic and perfectly set against the heavy percussion and blasting horns. Marcelo Dworecki lays down wonderful sinuous bass lines that underpin the rhythm and Mauricio Fleury’s keyboards and guitar add yet more texture to the sound. But it is an album that is led by the horns and driven by the percussion and here it is in its element: Afrobeat meets Brazilian flair and leaves the listener gasping in admiration. The music also incorporates many other influences, not least cumbia and ethio-jazz but the album is also laden with funk, working with all the other styles.

When they stretch out – as on ‘100% 13’ they cross the styles and forms but a blaster such as ‘Lembe’ shows the whole power and melody of the band.

The entire album was put together by the band as a collective and you can clearly hear the musicians working together to produce music that has more flavours than a Heston Blumental breakfast but that coalesces into a wondrous whole. It was recorded live in the studio and once again you can hear the band structure working to create something that is unique but entirely of the musicians that created it.

At low levels of volume there is enough to grab the ear but it comes into its own when the sound is cranked up.

For those new to the band, Bxiga 70 take their name from a Central São Paulo area where they are based and Fela Kuti’s Afrika 70 band. According to the band website the area is one of the best in the city to eat out and listen to music. If their music is anything to go by I can well believe it.

From the streets of Bixiga in Brazil and heavily influenced by Fela Kuti’s Afrika 70 band, the ten member of Bixiga 70 make quite a sound. Mixing Brazilian music with Afro-funk and reggae barely scratch the surface and they power through nine exhausting tracks on a stunner of an album.
Purely instrumental maybe sometimes means the need to have more complex patterns and melodies to carry a track and that is certainly the case here. With not one, or two, but three percussionist members the scene is set for a lively sound throughout. Trombone, trumpet and saxophones add to give the album the lift that makes it an essential listening.

An electronic funk bass line and semi-dubbed keyboards enlighten 100% 13, a track which it is impossible to remain seated to. The need to get up and make a complete fool of oneself is unavoidable as it becomes one of the many highlights of the album.

Niran rides through a Blaxplotation vibe as it cleverly combines more regular cumba beats and 70s funk sounds, and Di Dancer is more formula in its construction as South American rhythms are blended with African vibes.

It’s easy to make comparisons with other bass oriented sounds. Fela Kuti is an obvious one, even PigBag and The Apples could make justified mentions, but to be fair the connection between the continents separated by the mighty Pacific is rare, particularly when other aspects are also added to the mix.

Martelo moves at a million miles an hour from the opening beats and has a hook which could almost be Shaft inspired if it were speeded up tenfold. The frenetic bass guitar and tight clinical horns provide nothing but complete excitement.

The pace is slowed somewhat towards the end of the album as Lembe gradually decreases the manic sound, Mil Vidas too shows signs of the mood shifting and by the time album closer 7 Pancadas appears things have taken on a more serene tone.

Recorded live to maintain the power and recorded in the bands own studio, III is a triumph in bringing together several genres which have hereunto stayed poles apart.
Turn the volume up high and enjoy. 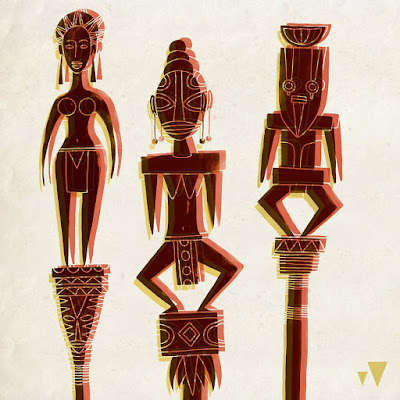