Antibalas - Where the Gods are in Peace 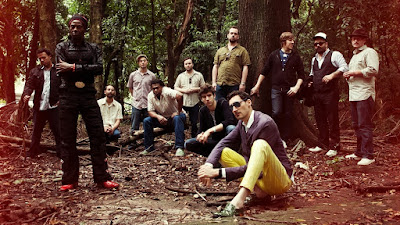 In Spanish, antibalas means “bulletproof”, and while the band of that name has so far avoided lunatics with assault rifles, it’s showing definite signs of being indestructible. Despite recent and extensive lineup changes, New York City’s Afrobeat juggernaut is now readying its first full-length release since 2012 and touring the jazz-festival circuit with renewed vigour.

As singer-percussionist Sifu Amayo explains, it’s kind of an old-meets-new situation. Under the London-born, Lagos-raised musician’s direction, Antibalas is returning to its roots in the sounds he experienced at the legendary Fela Anikulapo Kuti’s Shrine nightclub when he was a teenager: hypnotic, drum-heavy jams topped off with jazzy horn solos and a socially conscious message. But the younger players who have flooded into the band’s lineup since 2015 are also bringing their own 21st-century touches, including electronic treatments and heavier guitars.

“We have a new generation of musicians who have joined, just in the past year,” Amayo tells the Straight in a telephone interview from his Brooklyn home. “So just to get them going we’ve been reviving some of what I call older new material—a lot of stuff that I’d written in the past that was very epical—big, big compositions that just did not fit on the albums that we were doing back then.
“I was kind of holding on to the idea of playing longer compositions that made people study and think and want to know more, as opposed to the three-minute songs that we’re all more used to,” he continues. “So it was an opportunity to try something old and new—‘old’ meaning how we used to listen to music back in the day. You’d put an LP on and let it play, and you’d make time to listen to it. So that’s where we are right now.”

Where the Gods Are at Peace, which Antibalas will release in August, exemplifies this new approach. It contains just three long songs, which link together as the first leg of an eventual trilogy with sci-fi overtones. The central concept involves the arrival of new gods—or “alien cowboys”, as Amayo notes—who join forces with indigenous landkeepers and others to clean up the mess we’re now in.
“Some of us are struggling with this situation where we are today; some of us are coping badly,” Amayo explains. “So I figured, as a musician, I had a mission to look ahead and offer some sort of… Not solutions, but I’m saying ‘Okay, why don’t we just push forward?’ So that’s my perspective: I want to go to a place where the gods are at peace, not a world where the gods are constantly at war.”
And what better way to get there than through music?


Imagine a world where every person is temporarily transported to outer space for the sole purpose of looking back on earth to experience its sheer beauty. For a brief moment, we could all escape the greatest atrocities of our time and take in an outer-world perspective to see all of humanity living in harmonious coexistence. Brooklyn's own Afrobeat stalwarts Antibalas welcomes you aboard an enlightening cosmic voyage to witness the world in a new collective realm, and to journey off to a majestic multi-dimensional island, Where The Gods Are In Peace (Daptone Records: September 15, 2017). As depicted on Antibalas' latest album cover, the intergalactic golden island is a most desirable place waiting for your arrival!

Antibalas' new studio album, Where The Gods Are In Peace, is an epic Afro-Western Trilogy searching for solace from American political opportunism, greed and vengeance. Through its battle cry of resistance against exploitation and displacement, Antibalas' long-form compositions investigate oppression in 1800s America that eerily mirror the current state of the country. Three explosive original arrangements cultivate an urgent call to heal a broken system. Ultimately, the sonic excursion lands on an island where love is our first instinct. A new ideology is born opening our hearts to the possibilities of living as one unified people, where all gods are equal and together we prevail.

True to traditional form, Where The Gods Are In Peace pays respect to the forefathers of Afrobeat with compositions spanning nine to 15 minutes in length. With a blessing from the Fela Kuti legacy early in the band's career, Antibalas has long been revered for re-popularizing the classic Afrobeat sound while adding their distinct New York City grit to the mix. Influences of punk rock, free jazz, and hip-hop seep into their expansive works to define a truly 21st century translation of the Afrobeat genre and beyond.

Where The Gods Are In Peace unfolds with "Gold Rush," a tribute to our forgotten indigenous people. A kung-fu master by day and Afrobeat superstar by night, lead singer Duke Amayo initiates a striking narrative from the devastation of the Gold Rush era. Indigenous communities being depleted of land and resources for the profit supporting a greedy system, Amayo sings of the bloodshed and sacrifice endured by legends Black Hawk, Sun Dancer and Sitting Bull. Reparations are in order for fallen indigenous heroes and slaves who tirelessly fought for freedom.

In the historical lesson presented with "Gold Rush," Antibalas sets forth a thick interlocking groove with a backdrop of hard truths. Dancing with a higher purpose in feeling the pain of the past while ecstatic rhythms move the soul is a form of creative resistance. To engage in full body movement intersected with poignant lyrical expression bonds communities in service of helping rehabilitate the world.

"I don't see what's happening in our country and around the globe as a problem, it's an opportunity," says Amayo. "We fight the hardest when things are about to change. Our generation has the incredible ability to make things better for generations to come. We're at a critical tipping point, it's time for change."

The second composition, "Hook & Crook," is a fearless portrayal of the inherent thievery embedded in our colonial past. Amayo sings of "soaring up Kilimanjaro" to gain a broader perspective to realize he must detach from "crooked hooks." People have the power to wake up, march and dance with defiance. It's time to act now, shake up the system, and end the crooked cycle.

Comprised of three movements, "Tombstown" enters a new beginning, an island rich with gold and lush with resources where balance is restored. The opening movement sets course on being good-doers. Amayo sings, "One whose turn is up, make the world good." When it comes your turn, leaders do good, be just, and act wise.

For the second movement, Antibalas invites Zap Mama to invoke the powers of a goddess to help reshape and rebuild, to carry water to the people. Obstacles arise with an outlaw sheriff galloping to loot hearts and return people to a broken system. In the face of victory, there's always those who try to slow you down. In the final movement, people must elevate to higher ground with spiritual guidance leading them to the gates of Zion. Beyond the gates the outlaw cannot go; we move into the future with open hearts with infinite possibilities.

"There's something unique about making music during these dark times, you're really able to make a difference," says Martín Perna, baritone saxophonist and founder of Antibalas. "It's essential to respond to what's happening politically around the world, and the album title suggests that if the gods are not getting along, then how could people get along. It takes humans out of being at the center of life. Our role as musicians is to present the best art possible, which should ask more questions than it answers." 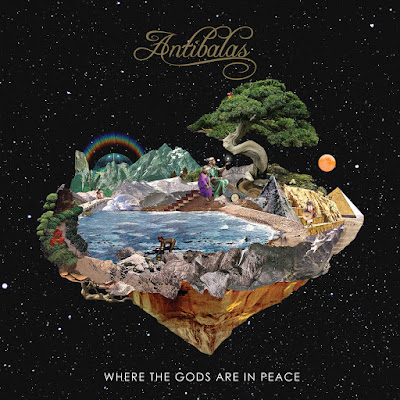