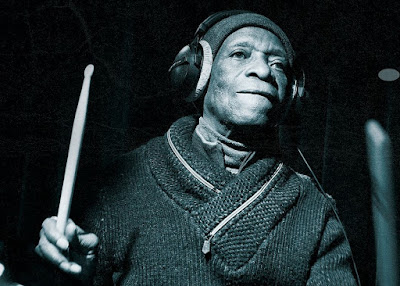 Classic Blue Note releases of the 1960s are filled with tracks that exoticise Africa, with names such as Afro Blue, Afrodisia, Ghana, Niger Mambo, Mr Kenyatta, The Man from Tanganyika and so on. Five decades later, Blue Note’s latest signing Tony Allen – the Nigerian drummer who powered Fela Kuti’s Afrobeat – is turning the tables and exoticising Blue Note’s hard-bop. The Source builds on Allen’s recent mini-LP of Art Blakey covers, but this time he and musical director Yann Jankielewicz invoke other jazz legends. Ewajo recalls Miles Davis’s angular modal jazz; On Fire is based around a Dizzy Gillespie-style chromatic trumpet riff; Cruising evokes Duke Ellington’s tone poems; Push and Pull sounds like an ecstatic New Orleans marching band. Each is set to one of Allen’s herky-jerky drum patterns and a restrictive ostinato bassline, but Allen’s Parisian band explore each theme in detail, with some garrulous, impressive solos from the likes of saxophonist Rémi Sciuto and trumpeter Nicolas Giraud.

Making your way through the formidable back catalog of long-time Fela Kuti drummer Tony Allen—one that spans nearly half a century—is a revelatory, sometimes head-spinning journey. Allen’s work has traversed styles that on the surface have little in common beyond his unique rhythmic presence. In the past 10 years, for example, Allen has tackled everything from Afrobeat (on solo album Film of Life), dreamy French pop (with Charlotte Gainsbourg), downbeat indie rock (with The Good, the Bad & the Queen), and techno (with the Moritz Von Oswald Trio). This range is a testament to both Allen’s redoubtable drumming skills and his ability to rein in his percussive ego in support of the job at hand.

Curiously, though, for a drummer who absorbed so much of his percussive knowledge from the work of Max Roach and Art Blakey, there was little place in Allen’s catalog for actual jazz until 2017. In May of this year, he released a tribute to Blakey and his Jazz Messengers on legendary jazz label Blue Note. That EP, which saw Allen filter Blakey’s hard swing through his own Afrobeat elasticity, serves as a brilliant precursor to The Source, with which it shares label, musicians, and influences. More importantly, The Source shares a fascinating musical hybridity with the Blakey EP. It’s a continuation of the cultural back-and-forth between African music and jazz that, decades ago, saw Blakey absorb West African musical influences on albums such as 1962’s The African Beat, and Allen mold the influence of jazz into the Afrobeat sound.

But The Source isn’t a jazz album, per se: Allen’s drums don’t typically swing so much as jitter and jiggle, with boundless syncopated rhythms that sound like a giant squid menacing a drum kit. Nor is it an Afrobeat album, with Allen’s band comprised largely of Parisian jazz musicians plus Cameroonian guitarist Indy Dibongue; Damon Albarn makes a low-key contribution to “Cool Cats.” Rather, this is an album that straddles jazz and Afrobeat in an elegant push-and-pull that sometimes edges closer to the former, sometimes wanders closer to the latter, and often sits joyfully in the middle.

On “Wolf Eats Wolf,” for example, a scratchy Afrobeat groove—all sputtering, percussive organ and ecstatic brass riffs—gives way to a wandering trombone solo. Album opener “Moody Boy” goes in the other direction: a scattered, jazzy introduction that sounds semi-improvised, dissolving into chicken-scratch guitar rhythm and tough funk drums. The hybrid tone of the band is hugely important to this mix, with the Afrobeat licks of Dibongue’s choppy guitar style balanced by the more classically jazz texture of Mathias Allamane’s double bass.

Freed from the role of support act, Allen is the unequivocal star of The Source, wallowing in the wonderful freedom of rhythmic expression. His unique drumming style rarely resorts to repetition as it alternately responds to and drives changes in the music. The result is a percussive masterclass, from the nervous energy of “Bad Roads,” where Allen’s mongrel rhythm puts a jazz beat onto an Afrobeat motif, to his deceptively complex skills on “Tony’s Blues.” On the latter, a drum pattern that initially appears out of joint pulls into glorious rhythmic focus with the introduction of the other musicians, who play in careful staccato dabs. In this mix, Allamane proves vital, his melodic bass riffs anchoring a musical blend that at times—as on the aptly named “Push and Pull”—threaten to float off into the ether. The one time Allamane is set free, his solo on “Cruising” is a joy, a rock solid bassline loosening into elastic bent notes, like a plastic packet slowly melting on a fire.

What saves The Source from being an album uniquely for drum nerds is the songwriting. The 11 tracks here—all written by Allen with saxophonist and long-time collaborator Yann Jankielewicz—may understandably not live up to jazz standards like “Moanin’” and “A Night in Tunisia” that appear on A Tribute to Art Blakey & The Jazz Messengers. But there are some fine musical motifs, including a delightfully itinerant chord sequence and jump-cut riff on “Push and Pull,” the moody, merry-go-round melody on “Tony’s Blues,” and a playfully menacing riff that emerges four-and-a-half minutes into “On Fire.”

Perhaps the greatest attribute of this album, though, is how it makes the complex sound effortless. The Source may draw on Afrobeat and jazz to create something intricate and expansive, but the results are never contrived or academic. In this, The Source mirrors the musical skills of Allen himself, a man who tackles rhythmic mazes like a walk in the park, making this release both a fine addition to his catalog and a load of genre-bending fun. Rarely has percussive innovation sounded this downright satisfying.

Jazz drummer Tony Allen, innovator of Afrobeat music with Fela Kuti’s band in the late 60s and 70s, returns to center stage with a new album. “The Source” is an energetic celebration of the history of jazz and african music, led by Allen’s unparalleled drumwork. Described by Brian Eno as “perhaps the greatest drummer who ever lived,” Allen lays down an album that delights at every turn with polished melodies and and exciting changes. It’ll bring you out of your seat.

Now based in Paris, Nigerian-born Allen has played on a seemingly endless stream of recordings. “The Source” is his debut LP for the legendary jazz record label Blue Note Records, following a tribute EP to Art Blakey, and he packs as much power behind the kit as ever. Retracing his roots to the album’s namesake, “The Source,” Allen documents the sounds of jazz far and wide, implementing a wide range of styles into his sound. No one in the jazz world seems better suited for this than Allen, the reigning king of Afrobeat influence.

Album opener “Moody Boy” invites us on Allen’s voyage into the past. In an extended intro of rolling piano and horn flourishes, the band seems to be catapulting us into its trip through time, back to the “The Source.” A minute and half in we enter the groove and don’t look back. This is not the future. This is the past arriving with all its might.

Standout track “Wolf Eat Wolf” summons the classic sound of Fela Kuti and Africa ‘70 back to the table, with circulating guitar lines and funky organ that drive alongside Allen’s absolutely infectious drumming patterns. Allen finds hidden lines of rhythm and complements horn melodies effortlessly, practicing both restraint and forceful playing in equal measure. By the song’s end the horn section is in full force, discovering New Orleans-style arrangements that feel like pure celebration.

“The Source” was recorded old school too – purely on analog gear from the studio to cutting the record. This not only affects the album’s sound but also its feel too. The approach of Allen and his impressive roster of jazz cats hearkens back to the glory days of jazz, before synths and other digital gear made their mark on the scene. With fifty years of experience behind him, Allen makes jazz cool and bravado look easy, lounging on an album cover that looks like it could’ve been made in the 60s.

“Cool Cats” comes draped in ethereal piano and drives forward in a celebration of afrofunk vibes. Allen and his band are experts at blending together the influences of jazz and Africana into a spectacular package, the sound spiraling together into a potent brew of vintage cool jazz and Nigerian groove.

It’s a joy to listen to, especially for those who want a little taste of the classic mid-century jazz sound seen through an African lens.

Tony Allen’s debut release for Blue Note, released just a couple months ago, paid tribute to legendary jazz drummer Art Blakey. And while it didn’t necessarily reveal entirely unforeseen depths in the music of either artist, it provided a much-needed bridge between the sounds of Allen’s Afrobeat past and his contemporary jazz future. Allen, the former drummer for Fela Kuti’s Africa 70 and one of the greatest drummers of all time, had up to this point never been all that closely associated with the sounds of hard bop, and by paying tribute to Blakey (who put the hard in hard bop) he provided a glimpse at a side of his musical identity that, to many listeners, hadn’t been as fully explored.
The Source, Allen’s full-length debut for Blue Note, is a step back from jazz tradition, and admirably so. While Allen’s latest full-length is by all means a jazz album, it’s one that’s firmly rooted in his own background as a pioneer of Nigerian funk. These songs groove hard, built upon the syncopated yet deeply funky rhythms that Allen built his career on more than 40 years ago, and they haven’t lost any of their punch. What its preceding EP revealed in terms of influence and background, The Source is about what Allen continues to build on that, creating a more exploratory fusion than leaning in any one expected direction.

Allen’s style is recognizable on The Source, but at no point is he ever replicating the past. The title The Source is intended as a nod to the various jazz influences that have gone into shaping his own personal playing style and growth as a musician, with the opening pair of tracks, “Moody Boy” and “Bad Roads,” incorporating elements of the long-running jazz label’s 75-year past. But in a way, The Source also seems to point back toward Allen as an influential figure on his own. A lot of it feels like compositions only he could have had a hand in, like the mixture of avant garde jazz and Afrobeat pulse in “Cruising,” or the low-key grooves of “On Fire.” Yet as strong as Allen is as both backbone and bandleader of the ensemble featured here, the players are every bit as essential to the character of these recordings, from the nimble bass walk of Mathias Allamane to the dual sax chorus of Rémi Sciuto and Jean-Jacques Elangue, who offer some brief glimpses of Kuti in their bold leads.

As The Source progresses, it delves deeper into a more recognizable Afrobeat sound almost as if to create a parallel between Allen’s own discoveries as they became infused into his own creations. “Tony’s Blues” is a kind of midway point between these two poles, while “Wolf Eats Wolf” is proper Africa 70-style rhythmic vamp. And “Cool Cats” finds Allen incorporating an unexpected extra element into one of his most energetic and urgent pieces; amid the brash display of horns and low-end strut, Damon Albarn (with whom Allen collaborated on The Good, The Bad & The Queen) lends some eerie touches of piano for atmosphere. As much as The Source is about the music that shaped who Tony Allen is as a musician, its compositions are about how Allen is helping to shape the future of jazz in his own image. 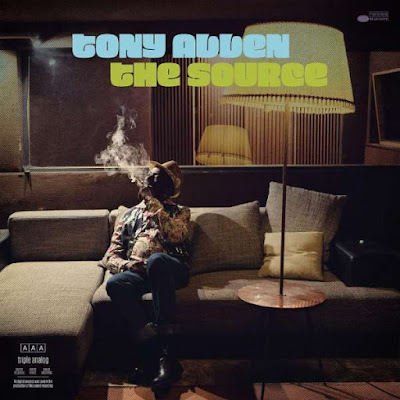