Femi Kuti - One People One World 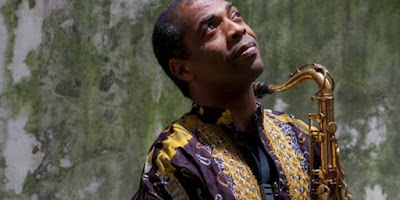 In the five years between Femi Kuti's Grammy-nominated No Place for My Dream and One People One World, he's been a busy man. He regularly performs at The Shrine, the performance space he built as a memorial to his late father Fela Kuti, he's a touring musician, and he also serves as a traveling ambassador for Amnesty International. (He also found time in 2017 to break the Guinness world record for the longest-held single note on a saxophone -- 51 minutes and 35 seconds.)

One People One World is Kuti's tenth album with his longstanding band Positive Force and its musical director and guitarist Opeyemi Awomolo. Unlike the righteous anger that inspired almost all of his previous recordings, One People One World is by contrast more affirmative; it's celebratory without sacrificing its activism. While Afrobeat is at the core of these 12 songs, Kuti picks up on the mosaic he began weaving on No Place for My Dream by incorporating the harmonies and rhythms of reggae, highlife, soul, R&B, hip-hop, and other global sounds into its mix, adding depth and complexity without sacrificing immediacy and accessibility. The title-track single commences with driving Afrobeat horns, but the rest of the band erupts into calypso and highlife celebration as Kuti and his backing singers deny racism, greed, and hatred the power to conquer the earth. With an infectious, swinging organ, "Africa Will Be Great Again" is a protest jam that details the corruption and greed that hold her back as a continent, but its pulsing wave of salsa, soca, and highlife makes it an irresistible anthem as Kuti posits the reclamation of the continent as the cradle of civilization and the heartbeat of the world. The D'Angelo-esque soul in "It's Best to Live on the Good Side" is carried by slinky, bubbling basslines, vamping R&B guitars, and a swirling organ. When the horns enter, thunder cracks as circular drumming and percussion thread in Afro-Cuban (Yoruban) rhythms. Second single "Na Their Way Be That" opens with cooking reggae before Femi's soulful saxophone solo and an Afrobeat chant cut in from the margin. "Evil People" is stomping, funky R&B, fueled by J.B.'s-style horns, layers of breakbeat drums, chunky wah-wah guitar, and congas. Immediately following is "Equal Opportunity," where Kuti and his backing chorus evoke the celebratory vibe of Curtis Mayfield's "Move on Up," and add jazzy Rhodes piano and Afrobeat horns and rhythms. Even straight-up Afro-funk jams like "Dem Militarize Democracy" open to embrace driving son rhythms, popping R&B basslines, and souled-out vocal and guitar choruses. The dubwise soul of closer "The Way Our Lives Go" is the set's most poetic and inspiring track. Kuti and Positive Force don't let up at all during One People One World. Impeccably sequenced, it runs from strength to strength, dazzling with expansive sonic textures, killer arrangements, and a musical genre palette that exists seemingly without boundaries. As a recording artist, Kuti has been reliably consistent, but this date is his masterpiece.
allmusic.com

Femi Kuti is his own man.

By now, that shouldn't be a controversial statement - One People One World is Kuti's seventh studio album since his eponymous debut in 1995 - but when you're born into a musical lineage as distinguished as the Kuti family, it's easy for audiences to try and compare family members.
Certainly, there are similarities between Kuti's newest work and those of his father, Fela. Overt social themes take precedence as Kuti takes on corruption, militarization, and all things unsavory, but he sounds less like the voice of the next revolution and more in tune with his peaceful side on largely mellow, polished tracks that are full of compassion rather than fighting spirit. Warm and rhythmic tracks like"Africa Will Be Great Again", "Best to Live on the Good Side", and "One People One World" are full of positivity and put forward a hopeful vision of worldwide unity.

Each track has brassy and bright traces of classic Afrobeat, but Kuti's softer messages are met with soul and reggae influences that better suit the peace, love, and understanding that UNICEF spokesperson, children's rights activist, and HIV/AIDS education advocate Kuti means to convey.
That isn't to say that Kuti doesn't have his more trenchant moments of social critique. In "How Many", he demands answers to relentlessly driving beats: "How many songs must we sing / Before them hear the suffering of the people? / How many innocent lives must be lost / Before them know say war na evil?" His questions are pertinent ones, blasting climate change deniers and politicians who ignore poverty even when those afflicted rise up and try to fight it. On "Evil People", Kuti is utterly impassioned, singing straight from the heart about atrocities like ritual killings, kidnapping, and the destructive consequences of greed for both power and money.

Some songs are more specific; "Dem Don Come Again" directly attacks the hypocrisy of those who kill in the name of religion. Kuti follows it directly with "Dem Militarize Democracy", which specifically namechecks past and present presidents and other high-ranking members of the Nigerian government who have come from military backgrounds and brought shows of force to their roles as heads of state.

At the very end of the album, Kuti pours his whole heart into "The Way Our Lives Go", a pensive reflection on the nature of human life in relation to cycles of society and the world as a whole. His outlook, in spite of all the suffering he laments, is an optimistic one. "It's just a matter of time," he sings, "the people will rise and shine / One day the people will rise / And say to the suffering goodbye."

To come into One People One World with preconceptions of hot, pounding Afrobeat is to set oneself up for disappointment. To listen with an open mind is the key to appreciating Femi Kuti's unique music, not confined to a genre or locked in rigid ideas of stylistic tradition. One People One World is an album made to urge forward a nationwide - perhaps ultimately worldwide - healing process, and while it shines a light outward, it also reveals more about Kuti than perhaps any of his previous albums. His heart is on his sleeve and in his music, and the attention his voice commands is well-deserved.

The frustrations that appear throughout Femi Kuti’s One People One World will be familiar to anyone with a passing interest in international news. The stories of despair that generally reach the UK from Kuti’s Nigeria are all present here but they appear alongside a call for resistance. He argues that Nigeria has been held back from its true potential by corrupt politicians and bad governance, as he and his father Fela Kuti have argued on many previous albums, and the stories of corruption and deprivation here are balanced with a message of hope. One day, the people of Africa will rise up against their rulers and run their countries for the people.

It’s a message that could be concerning in these sensitively populist times; the album’s opening song title ‘Africa Will Be Great Again’ is likely to suggest negative connotation for many listeners. But Kuti’s rhetoric is anti-authoritarian and optimistic. In fact, this album is so breezy and energetic that you might not notice the politics in it at all.

The music is a mixture of funk, Afrobeat, and soul; influences that Kuti has soaked up over 40 years of performing. It’s a style that will be familiar to anyone who’s followed his work in the past, or the work of other Afrobeat artists in general, but he does find little pockets of variation on this album. ‘Na Their Way Be That’ plays with a loose groove, led by a twisting, menacing saxophone riff, while ‘Equal Opportunity’ amps up the tempo to create a more South American rhythm.

However, the album mostly follows a very similar style; Kuti sings verses that read like political slogans, which he then punctuates with powerful blasts of horns. It’s an entertaining formula but also one that leaves the album feeling a little conservative. It feels unfair to compare Femi Kuti’s work to the music of his father but doing so sheds light on the problems with One People One World. Femi is a talented musician and band leader but he lacks the scathing wit and original turns-of-phrase of his father’s best songs, in comparison his lyrics can feel a little one note.

Take for example the lyrics of an album highlight ‘Africa Will Be Great Again’, where Kuti reels off a list of structural and economic problems and calls for investment in infrastructure and political reforms. He makes a fair argument but comes off sounding like a politician. Compared to the more abstract lyrics of his father’s ‘Zombie’ and ‘Water Get No Enemy’, it is uninspiringly straight-faced. It’s easy to support Femi Kuti’s message on One People One World but also wish that he’d delivered it in a more creative way.

The highlights on the album mostly come from the musical arrangements. ‘Best To Live on the Good Side’ has the album’s most invigorating horn arrangement, which rises and falls like Hollywood swing, and ‘Evil People’ brings out Kuti’s best vocal performance with a near-hysterical wail. Unfortunately, too much of One People One World meanders without enough memorable hooks or musical variety. It may have been better if Kuti had included fewer songs and let some tracks stretch past the 5/6 minute marks, allowing them to move into stranger territory.

Femi Kuti is still an entertaining performer and One People One World is almost tailor-made for live shows with its sharp performances and joyful tone. But listening to it on its own is a much less satisfying experience. These songs are too similar in tone and message, and unfortunately that makes for an undynamic album. The problem can be seen on the album’s closing track ‘The Way Our Lives Go (Rise and Shine)’ when Kuti sings that the glorious revolution of the people will come, it’s just a matter of time. But if Kuti is still singing about the same problems he saw decades ago, in the same style, and with the same intensity, the message falls flat. How are we to believe that this time it will come true? 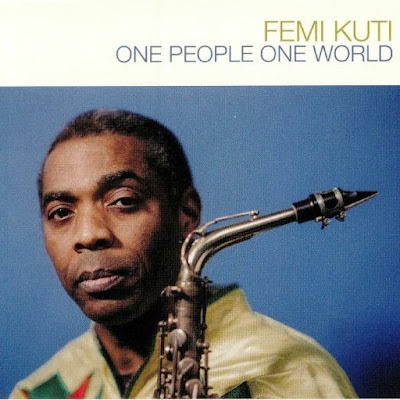