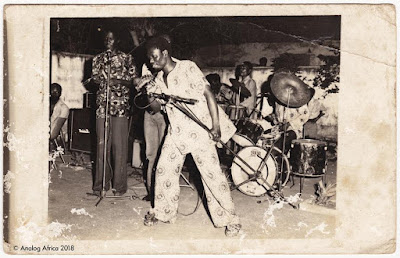 A great compilation can open the gate to another world. Who knew that some of the most exciting Afro-funk records of all time were actually made in the small West African country of Benin? Once Analog Africa released the first African Scream Contest in 2008, the proof was there for all to hear, gut-busting yelps, lethally welldrilled horn sections and irresistibly insistent rhythms added up to a record that took you into its own space with the same electrifying sureness as any favourite blues or soul or funk or punk sampler you might care to mention.

Ten years on, intrepid crate-digger Samy Ben Redjeb unveils a new treasuretrove of Vodoun-inspired Afrobeat heavy funk crossover greatness. Right from the laceratingly raw guitar fanfare which kicks off Les Sympathics’ pile-driving opener, it’s clear that African Scream Contest II is going to be every bit as joyous a voyage of discovery as its predecessor. And just as you’re trying to get off the canvas after this one-punch knock out, an irresistible Afro-ska romp with a more than subliminal echo of the Batman theme puts you right back there. Ignace De Souza and the Melody Aces’ “Asaw Fofor" would’ve been a killer instrumental but once you’ve factored in the improbably-rich-to-the-point-of-being-Nat-King-Cole-influenced lead vocal, it’s a total revelation.

The screaming does not stop there, in fact it’s only just beginning. But the strange thing about African Scream Contest II’s celebration of unfettered Beninese creativity is that it would not have been possible without the assistance of a musician who had been trained by the Russian secret services to "search and destroy" enemies of the country’s (then) Marxist-Leninist president Mathieu Kerekou.

Already familiar to fans of the first African Scream Contest as a mainstay of ruthlessly disciplined military band Les Volcans de la Capitale, Lokonon André vanished in a cloud of dust at Ben Redjeb’s behest with a list of names and some petrol money, only to return a few days later having miraculously tracked down every single name he’d been given. The source of this Afrobeat bounty-hunter’s impressive people-finding skills - his training with the KGB - highlights the tension between encroaching authoritarian politics and fearless expressions of personal creative freedom which is the back-story of so much great African music of the 60s and 70s. Happily, in this instance, Lokonon was tracking the artists down to offer them licensing deals, rather than to arrest them.

Where some purveyors of vintage African sounds seem to be strip-mining the continent’s musical heritage with no less rapacious intent than the mining companies and colonial authorities who previously extracted its mineral wealth, Samy Ben Redjeb’s determination to track this amazing music to its human sources pays huge karmic dividends.


Like every other Analog Africa release, African Scream Contest II is illuminated by meticulously researched text and effortlessly fashion-forward photography supplied by the artists themselves. Looming large - alongside Lokonon André - in the cast of biopic-worthy characters to emerge from this seductive tropical miasma is visionary space-nerd Bernard Dohounso, who laid the foundations for Benin’s vinyl predominance by importing and assembling the turntables that would play the products of his Bond villain-acronymed pressing plant SATEL, a factory that would revolutionise the music industry in the whole region.

The scene documented here couldn’t have been born anywhere else but in the Benin Republic , and the prime reason for that is Vodoun. It’s one of the world’s most complex religions, involving the worship of some 250 divinities, where each divinity has its own specific set of rhythms, and the bands introduced on the African Scream Contest series and other compilations from that country were no less diverse than that army of different Gods. At once restless pioneers and masters of the art of modernising their own folklore, the mystic sound of Vodoun was their prime source of inspiration.

One especially irascible Vodoun-adept was Antoine Dougbe, who styled himself “The devil’s prime minister” while turning ancestral rhythms into satanically alluring modern beats. As Orchestre Poly-Rythmo songwriter Pynasco has observed sagely, “Evil is not elsewhere, evil extends into the house”. And African Scream Contest II is a gloriously cinematic road-trip through an undiscovered realm of music lore whose familiarity is every bit as thrilling as its otherness. 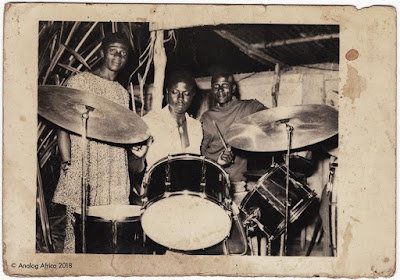 Five songs into African Scream Contest 2 comes one of the greatest recorded screams I’ve ever heard.The Picoby Band D’Abomey have just begun to play “Mé Adomina,” a track built around a loping surf groove and a lazy shaker that suggests almost anything besides ecstatic fits of joy. And then the singer gets free. He lets loose a blood-curdling howl that immediately redlines the song and that’s probably still resounding in the Beninese city where it was recorded. It is a wild thing, a shriek of joy, truly an entrant in the hall of fame of great rock ’n’ roll screams. Move over, “Won’t Get Fooled Again.”

It’s such a powerful shout that it shakes you into realizing that it’s the first of its kind on this two-LP compilation of afro-funk from Benin. The modest yelp that caps the North African lullaby of Elias Akadiri and Sunny Black’s Band’s “L’enfance” notwithstanding, the contested screams here aren’t being laid down by the musicians; it’s that the musicians are competing to make the listener scream.
And there’s a lot to scream about on African Scream Contest 2, the sequel to the legendary 2008 compilation of the same name put together by ace crate-digger Sam Ben Redjeb, the former flight attendant behind the Analog Africa label. Like its older brother, 2 makes the case for the vitality and richness of the music scene in Benin, a country whose musical legacy is greatly overshadowed by its Nigerian neighbors to the east and, to a lesser degree, by Ghana to the west.

The sounds here are immediately familiar, but reveal unexpected complexities: Les Sympathics de Porto Novo kick things off with a zamrock-worthy lead guitar before segueing into a loose afrobeat pattern, l’Orchsetre El Rego spangles a stutter-stepping afro-cuban jam with tinny synths and soul-jazz organ, the Orchestre Poly-Rythmo de Cotonou play chanting Ghanaian disco from deep pocket grooves while the vocals shift into wispy calls-and-responses that sound more like Tuareg vocal melodies than the sounds typically associated with West Africa. It suggests that Benin’s musicians soaked up everything that came near them and then some, a kind of accidental melting pot of sound.


Not that this versatility should be all that surprising; the incredible variety of African records that have been reissued since the original Scream Contest long ago illuminated the level of interplay among the various music scenes of the region for Western listeners. But it’s a welcome reminder that that interplay wasn’t only happening in the cultural hubs of Accra and Lagos, that the contemporary sounds of Mali and Morocco were just as mobile as their West African counterparts, and, more than anything, that style isn’t the sole property of power centers; this music was being made and adored for its own sake long before anyone outside of Benin — let alone the United States — had ears for it.

All of which gives African Scream Contest 2 a sense of power all its own, one that’s made manifest on the comp’s second track. Ignace de Souza and the Melody Aces set “Asaw Fofor” rolling on a rockabilly groove. de Souza himself leads the band with all the smoothness of Cab Calloway or Nat King Cole, and the sax, rather than stab along to the song’s rhythm, sits back and waits, finally taking a long, warm solo before bowing out for the rest of the song. That sense of confidence, the willingness to luxuriate in a groove or a tone or a feeling without hurrying to an ending, animates all of the music here, and, maybe more than anything else, makes me wonder what was happening in Togo, and The Gambia, and Gabon, and everywhere else in African flyover country.
aquariumdrunkard 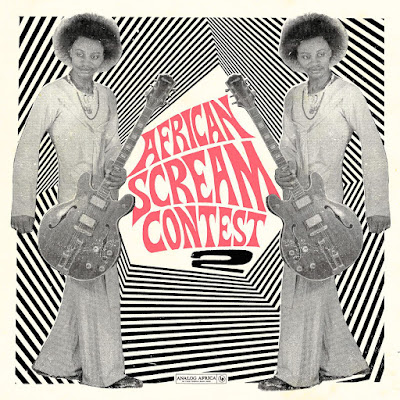