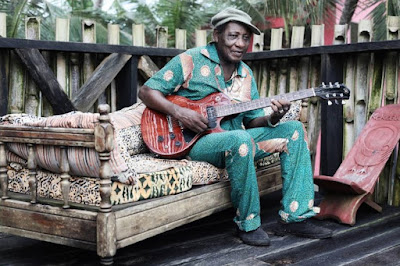 Ebo, Good to hear your voice. Are you in Saltpond now?

Ah, I wish I was there. It’s cold and snowing here in New York. But we’re surviving.

Well, I wish I was in New York.

I would like that too. I hope we can help make that happen. I’ve been listening to this new album. It’s beautiful work, once again.

O.K. Thank you very much.

Tell me the story of this record.

This recording took about one year to prepare. Some of the songs were from other works, earlier works, that we had to retouch and rearrange to suit the modern, the current trends of music. For example, “Krumadey.” It is about the history of people associating with a mad man through his music. In those days, there was not so much music around. “Yen Ara” says, “We, who are only 30, conquered one thousand. We did it. It is us!” The people of this village, a Fanti people, who were only 30, boasted of their power to conquer one thousand Ashanti warriors. So this has a history of the Asafo music that we play in this country.

Asafo. I remember this. This is music associated with the Ashanti wars.

You know, our music is unlike any other Western tune. It takes its roots from the Ghanaian Asafo music. We try to get it into a danceable form, while keeping its history and merit.

Speaking of the album overall, are all these traditional songs, or adaptations?

The ones I spoke of are traditional songs. “Yen Ara” is a traditional song of the military wing of every Asafo company. And it is sung to celebrate their victory over a thousand enemies. “Mumudey” also has a history. It’s about a dwarf who lived with some people, and who could play every type of music. He could play trumpet or sax, any type of instrument, and he dressed immaculately. The people thought he was very clever, so they honored him with a name and a song. They called him, “Abiouti Konfu.” So all these songs are historical music of the Fanti people of the west coast of Ghana.

Then I have “Ankoma’m.” This is an exhibition of the fear of a loner who has all his people dead, and is now walking on the edge, alone. But he is capable of keeping up with his problems. All these songs have variety. The recording is not repetitive. Every song is different, a different mood, a different form.

What about the lead track, “Poverty”?

So, Ebo, speaking of rich and poor, I have been reading in the newspaper that the economy in Ghana is doing very well right now. Do you feel that? Do you feel like less people are poor now?

Yes, certainly. But, people are still not very comfortable with what they have to live on. Because if the economy is good, it should show up in the living style of the people. But people are still paying for goods and for food, high prices that they can’t meet. And the worst thing is that the economy has hit the health system. You go to the hospital, and then the prescriptions in the pharmacy are very high prices, and obviously, people will die from it. It’s amazing that someone will have to pay about 1800 [cedi] to be given some medicines from the hospital for diabetes, and for high blood pressure. These are very high; the drug prices are high. And that is even more threatening than the food and other goods. Electricity as been brought down by about 30 percent and that might help people to solve some of their problems, but personally, I cannot say I am very comfortable with the situation.

That’s tough, Ebo. Let’s come back to the music. Where did you record this record, and who was the band?
Some of the musicians are my children. The guy who sang “Krumadey” is my son and also “Mumudey Mumudey.” Those are my sons, Henry and Roy Taylor. Others are Philip Arthur on percussion, Rim Akandoh, on the drums and Emmanuel Ackon is playing the bass. Then my two sons are on percussion and piano. These musicians have a clever way of playing my music. And I think they did very well in the studio in Holland, in Amsterdam. Though before that, we had a lot of rehearsals in Ghana, so they had found it very easy to record tracks. They were well rehearsed.

It shows. What about the brass section? The brass on this record is sensational.

The brass section is a duet of a trombone and a trumpet. Long John [Ntumy] is on trumpet, and he was very well prepared, playing classical and jazz for the past 15 years. Then [Benjamin] Osabotey, who is on trombone, has been playing trombone for about 30 years, since he was 15 years old.

Yeah, and they came out of recording room satisfied with what they did. I think they did very well recording internationally for the first time.

That’s so beautiful, Ebo. And once again, you’ve written such beautiful horn arrangements for these guys. Are these new arrangements you made for these recordings? Even for the traditional songs?

I think you did just fine. I really like this record, especially the brass. It’s fine work. And are you able to take band to Europe to do concerts?

Oh yes. We thought we needed to change our repertoire for the concerts. There are some songs that have been overplayed, and we want to change them, systematically, with these new grooves.

Well, we want to see you here. Because it’s clear from this recording that you and your group are going strong.

Yes. We will be there.

We can’t wait! Say, I hear you had an interesting time last fall in Nigeria, playing at Felebration in Lagos.

Yes, yes, yes. Mark LeVine invited us and I joined them in Port Harcourt, and then we came to Lagos. We really had a nice time being part of the celebration. Mark worked very hard to get us on the program, though the program was tight. I remember one night, I played for one minute. On the stage. That was it.

One minute? Oh my God.

Yeah, but Fela is a great man. I always wanted to follow him because he has done very well to take highlife in another direction, in a minor mood, and with that Yoruba feeling. He got across and was noticed. I’m glad that there are Afrobeat bands all over Europe.

So I congratulate Fela for having done that. He was my contemporary in London whilst I went to the Eric Gilder School of Music. Fela was at another school; I have forgotten the name. But we met quite a lot and played a lot of highlife, infusing it with jazz and talking bigger about highlife’s achievement as an international music.

When we were down there with you, you told us some wonderful stories about your times with Fela. You know, last month Tony Allen was here in town, and he’s still going strong.

He’s up to a lot of interesting things these days, making jazz records and more experimental things. He’s amazing.

Tony is a very exciting musician to work with.

So how do you feel about what’s happening with the newer music in Ghana these days? These young stars keep rising. The music is changing, but it’s doing quite well. Do you ever interact or collaborate with some of these young Ghanaian artists?
Yes I do. Last month I was in the studio with Okyeame Kwame, one of the rappers. He wanted to do some traditional highlife and I helped them to arrange it in the studio. I was very glad to have been part of that collaboration, because it’s a recognition of the knowledge of the older musicians. The younger ones are pulling the right strings. I like the situation where the industry is developing, even though the music is still low. Ghanaian musicians are very good musicians. I always say that. You can always find good musicians in Ghana, even though they don’t have any kind of formal training, like those who have been to Berklee or Juilliard. We need formal education in music. It’s unfortunate that the last government deleted music from the school curriculum as a subject.

That has created a vacuum of music knowledge. These guys have no formal education, so they are using their brains and their intelligence, and I should say that if they were given the formal education that you get in schools like Berklee or Juilliard or other schools in Europe, there would be much greater musicians in Ghana. So the authorities will have to review their decision to delete music from the school curriculum as a subject.

It is a big mistake. Music gives people so many skills that apply in other areas as well.

That’s not good. You certainly serve as a good example of how important it is to study music, because you really did, and it makes your work so rich.

I am glad to hear that some of the young musicians are working with you and recognizing that the old music has a lot to teach. Even if they don’t have a formal education, they can still learn a lot by listening to people like you.

Yes. I was happy that Okyeame Kwame invited me to the studio to impart some of my music on one of his tracks. In recognition of that, many of them would now like to take private study.

That’s good. You know, I was speaking with Fela’s son Femi a few weeks ago, and I asked him what he thought about the young musicians in Nigeria, and he said a similar thing. They mostly haven’t learned to play instruments. So they’re doing well now, but what happens when they get older and they’re not the new thing anymore? If they can’t play an instrument and don’t have skills, they will be nowhere.
Well, sure. Nigeria has great musicians, great songwriters. But I saw some guys in Port Harcourt who could play some very nice lines on their instruments.

Yes. You were at Chicoco, that wonderful organization started by Mark Uwemedimo and Ana Bonaldo and members of the community. Isn’t that a great thing?

Yes. I want to record with them. But the madame is still arranging. When she comes back from Brazil, she will be able to organize a recording at Chicoco.

I hope you get to do that. I would love to hear it. One last thing, I wanted to tell you that our radio program, Afropop, is turning 30 years old this year. We’ve been on the air for 30 years. Maybe for a vet like you, that’s not so long, but for us it’s a long time.

I’d like to be part of the celebration. You have to widen the scope! I am highly impressed by Afropop. This institution is helping to raise up African music. I wish Afropop a happy celebration of 30 years of existence. Bravo!

And bravo to you, Ebo, for another great album. Thanks so much.