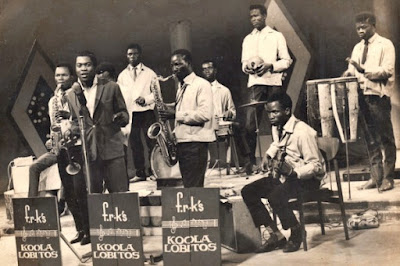 
Afrobeat pioneer Fela Kuti has inspired Beyoncé, Brian Eno and Damon Albarn. On what would have been his 80th birthday BRIAN MORTON looks back on the time he was granted a rare meeting with the self-styled "black president" at his gated studio in Lagos.

In Lagos, it is the ‘sufferheads’ who party. You can tell a lot about cultures from their reaction to adversity and oppression. Some put on sackcloth and close the doors. Others celebrate. In Nigeria it tends to be the latter. Muhammadu Buhari, the former military leader and Fela Kuti’s sworn enemy, is back in power again, this time as president and in his own words, a “converted democrat”.

It was Afrobeat pioneer Fela and his Africa ’80 group who provided the soundtrack to Buhari’s cruel early 80s regime; a body of extravagantly defiant dance music that masked anger and pain behind fierce joy.

After the extraordinary trilogy of albums Fela made in 1981 – Black President, Original Sufferhead, Unknown Soldier – there was a hiatus while he served a jail sentence for “currency offences” trumped up by Buhari’s lackeys.

When he emerged, he divorced his wives, all twelve of them, and went back into the studio to make first Army Arrangement and then the astonishing Beasts of No Nation. Perhaps no other album cover – or maybe just those for Sgt Pepper and Miles Davis’s Bitches Brew – has been more widely discussed.

The artwork created by Lemi Ghariokwu shows Margaret Thatcher, Ronald Reagan and P. W. Botha, all horned, with Botha’s promise that “this uprising [against apartheid] will bring out the beast in us”.

The album cover for Beasts of No Nation features the likenesses of Mobutu Sese Seko, General Buhari, Tunde Idiagbon, Margaret Thatcher, P.W. Botha and Reagan.
Though his mother was no longer alive when I met him, it was her name that gained me unexpected access to Fela’s circle in 1985. My father had met her at the end of the war when he was still serving in Nigeria, albeit in a Northern Hausa-speaking town rather than Lagos.

The connection, which seemed improbable given Fela’s family’s anti-colonial politics, seems to have meant something, because a meeting was arranged. But it was made clear that there was to be no interview and no recording.

I was picked up in a car and driven at shocking speed through the streets of Lagos, over what was clearly an unnecessarily elaborate route, since we passed the same barber’s, with a tiny man in white shorts squatting outside, at least three times.

Neither the driver nor the man who sat in the back beside me spoke a word, and when we arrived at a small gated studio in a back street they simply got out of the car, leaving the doors wide and walked into the building. Not knowing where I was and fairly rattled, I thought I'd better go in.

There was Fela, slight, smiling but with no kindness in his eyes. Gradually the room filled. I was the only white face. There was a strong smell of hashish, but no one was smoking.

Fela didn’t so much rise from his couch as levitate. The only genuinely charismatic men I have ever met were Fela and the artist Joseph Beuys. He began to speak, fast, bending forward from the hips, wearing a patterned shirt open over a strangely concave torso. How did that little frame produce a voice that, like Bob Marley’s, sang redemption songs for the whole world? And how did he manage to blow his saxophones with so much force?


What he said was a mixture of pidgin and Yoruba, strongly cadenced as if he were reciting an epic poem. I understood none of it. It reached some kind of climax and then one by one the others left the room.
I had about ten minutes alone with Fela, talking about mothers and fathers. He gave me a saxophone mouthpiece – hard Bakelite, with tooth marks – and then left without a goodbye. The journey back to my hotel was no slower, but somehow made more sense.

Fela Kuti would have been 80 today (15 October 2018). He was born Olufela Olusegun Oludoton Ransome-Kuti in Abeokuta, in the Nigerian south west. He was raised in an educated and deeply anti-colonial family.

Fela went off to London to study medicine, as two of his brothers were to do, but switched to music and went to Trinity College.

There are recordings of him in London playing a hybrid of jazz and highlife. But it was not until he had studied African music in Accra and spent an ear- and eye-opening 1969 in Los Angeles that he began to develop his distinctive sound and style of recording.

Fela did not so much make songs as whole albums. Beasts of No Nation (which plays in my house every day while supper is prepared) is a single LP-side of music, a dark chant over declamatory organ, saxophone and guitar, comparable in its darkness to Miles’s notorious Agharta and Pangaea albums.

Fela believed that his country was run by zombies. His paranoia was certainly fuelled by alcohol and drugs, but also by sustained trauma. A powerful brain began to turn in on itself, and his tragedy was that he began to believe his own legend and, all too literally, in magic.
Having abandoned the Ransome name as “enslaving” and adopting the new middle name of Anikulapo (which is said to mean “he who has death in his pouch”) he turned his back on Western medicine, too. In 1997, his death was announced. His brother, who had served in government as a health minister, said that Fela died of AIDS. Some believe that this was propaganda, to highlight the HIV epidemic. It scarcely matters. Fela’s passing put the disease in the headlines.