Originally released in 1972 in very limited numbers. A trip of an album rich in percussive energy and African chant - made in Brazil! The sounds of continents colliding in a young, funky & soul fuelled 70s ....this is one is on full burn from start to finish ! This the only album by Massáhi Tribe and it became notorious for it’s unique sound and the almost complete lack of information about its creators.

"This is a sound made in Brazil. All the members are Brazilians. But the goal is to show the young african music, with all his distinctions that features the origin of the black continent’s music. In this record we launch several curious things. Starting from a rhythmic draw, based on the camel steps that match the division 4/4, on the same line of YÁ YÁ YÁ and SOUL MUSIC, which was given the name of OGA, this, because in Lagos, Nigeria’s capital, is an intimate treatment among friends. There, a man feels good when compared to a OGA (camel). Purposely and proudly we launch this new and different LP, not only dedicated to all record collectors in the world but also to all party lovers, nights in club, and even for who’s loving, because on both sides, there aren't intervals. It’s a contagious and crazy rhythm." - Goma Gringa

This is how, in 1971, Embaixador and Maestro João Negrão described the record on his back cover. These words did not aged a bit.

We are very happy and proud to announce, 44 years later, the first 100% official reissue of this genuine work that became legendary and considered as the "Holy Grail" of Brazilian music among collectors around the world.' 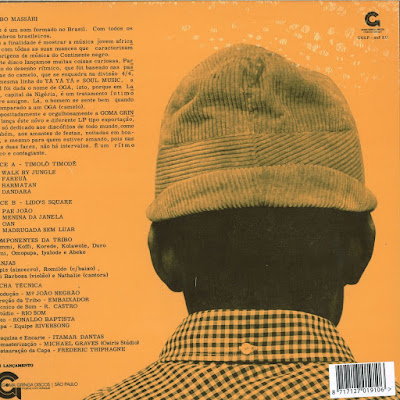 A1. Walk By Jungle (Embaixador)
A2. Fareuá (José Prates)
A3. Harmatan (Heitor da Costa)
A4. Dandara (Embaixador)
SIDE B - LIDO’S SQUARE