From UK: The Sorcerers 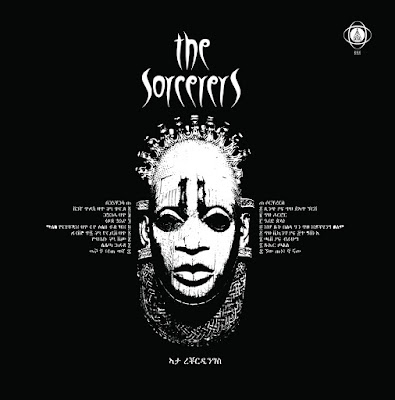 "Who's this? The Sorcerers? It's cool! This is great. Give me the cd man!" - Mulatu Astatke

Taking influences from Ethiopiques ethiojazz as well as the soundtracks to the European horror films of the 60s and 70s, The Sorcerers seamlessly blend these disparate elements into one cohesive package. Based in ATA Records' home of Leeds, The Sorcerers are made up of the cream of the city's jazz and world scene. Forming the backbone of the ATA Records house band they incorporate bass clarinets, flutes, and vibraphone alongside bass, guitar organ and drums, providing Ellingtonian textures on top of a solid rhythmic foundation.

After featuring on the "Funk, Soul & Afro rarities: An Introduction to ATA Records" compilation from Here and Now records last year, they set to work recording a full length LP at the studios of record label ATA Records.

"The Sorcerers are the Ethiopiques of the modern age"
- Jazzman Gerald.

Initially inspired by the work of Ethiopian composer Mulatu Astatke, the Sorcerers have deftly incorporated a wide breadth of musical influences from the creepy metallic textures and quietly insistent rhythm section of "Pinch Of The Death Nerve" through to the Moondogesque melodies of the Viking of 5th street and the KPM inspired orchestration of closing track night of the sorcerer. The LP also includes an alternate version of "Cave Of Brahma", a heavily Mulatu influenced track that featured on the ATA Records compilation. The album has a dark undercurrent that weaves throughout all 8 tracks, underpinning the album with an unsettling and evocative theme.

Support comes from Jazzman Gerald, Jimi Tenor, Shawn Lee, Nightmares On Wax and Mulatu Astatke himself who heard the album during a recent trip to London. On hearing the record he exclaimed "Who's this? The Sorcerers? It's cool! This is great. Give me the cd man!". He has since gone on to play The Sorcerers on his Addis Ababa radio show.

Music sounds and styles take many various forms, and a lot of sounds eventually come full circle in return. We’ve seen a certain funk and soul sound akin to the late 60’s pop up, as well as garage, even boom bap hip hop makes a resurgence in modern day tracks. While Ethio-Jazz is something that is touched upon by a few bands, usually combined with African rhythms, highlife, or afrobeat, a band emerges out of Leeds, England to take on a whole genre and then some. The Sorcerers, the house band for the Leeds label ATA, were formed by the guitarist Pete Williams and bassist Neil Innes after writing some Ethio inspired music for a 7″. Featuring Joost Hendrickx on drum, Johnny Richards on pino, and the multi-instrumentalist Richard Ormond, the response was so overwhelming that they decided to do a whole recrod. Heavily influenced by Ehthiopian Jazz, but also blending the sounds of 60’s and 70’s European horror films, this band has been championed by the likes of Jazzman Gerald (who quoted the title of this article) and probably the most well known of all Ethio-Jazz musicians Mulatu Estatke. If that isn’t a cosign to the highest level, we don’t know what is. If you’re a fan of his work (and if you’re not, you should be), you will be delighted at this record. Properly recorded by this ace band, you will be amazed as they forge a path of their own in the modern world with theses past influences and their own special sound. Preserving and spreading this gospel to a whole new population of listeners, The Sorcerers nailed it on this record. “The Horror”, a sample from the record is Ehtio-Jazz right down to the core. A pounding, steady backbeat, eerie organ, and horns sit nicely with the bass line. It’s not hard to get up out of your seat and move to their groove on this track. They are living the music, and we are receiving the this aural transmission to pass it on to the next listener. It transports you back to when Mulatu was in London, or making music at Berklee, or even a night club in Addis Ababa. It feels that authentic. A most unique release, we are delighted to present this record to you today. Available worldwide August 7th on ATA Records on LP, CD, and digital.