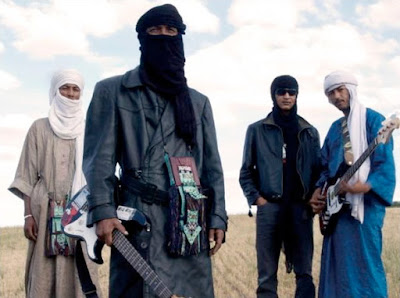 
Terakaft the pioneers of desert rock are back. With their most rock oriented offering to date and – at the same time – their most personal: Ténéré – ‚Alone‘. An album that was born out of a need to maintain sanity in times of broken dreams and lies. „I call on every brother who loves his nation“, sings Diara, „to stop saying bad words, that destroy our people“.

‚Alone‘ was born out of a need to maintain sanity in times of broken dreams and lies. It might be their most rock oriented album to date but at the same time it is their most poetic. Five years ago with their album “Aratan N Azawad” and even the follow up “Kel Tamasheq”, Terakaft was still full of hope, things had started to change. Today the soil that was supposed to blossom is burnt by selfishness and rivalry.

„There are too many characters in the picture, too many chiefs and not enough people“, says Diara when asked about the political developments in the last years. He used to sing political songs back in the days in his rebel youth when he was still playing guitar with Tinariwen. Nowadays he is only watching with a new feeling growing inside him: “Ténéré”, which is the title he gave to this album, and which translates to: “Alone”. Back in the days when they were sitting in the dunes drinking tea with big hopes for the future, singing their songs into the night, his nephew Sanou was sitting next to him, still a young boy. Occasionally the uncle would hand his guitar to the nephew, so he could play along with the others. Just before the international success story of Tinariwen started, Diara got stuck on his way to Bamako a missed flight and his place in Tinariwen was taken. Meanwhile Sanou had set up his own band Terakaft. Today Diara and Sanou are the backbone of Terakaft: the guardians of desert blues. Diara is the spirit of the band, as strong as a rock. Sanou – his nephew – is the heart of Terakaft. He brings the life to its spirit. Diara the elder, lays out heavy rhythms pulsing through his guitar. Sanou has become the natural heir to the sound of “assouf”, with his intense rock riffs and an up-lifting attitude towards life.

‚Alone‘ is the 5th album of Terakaft. It was produced by Justin Adams who is one of the musicians from Europe who has delved deep into Tuareg music in the last years. Adams is known as a musician and producer through his work with Robert Plant, Tinariwen and Juldeh Camara. He has geared up “The Caravan” to reach new shores and hit the dancefloors. In these troubled times, they have made an album together, that presents the deep Saharan rhythms as a vital contemporary heartbeat. Standing on the ruins of their peoples dreams they sing to their brothers and sisters about true friendship and tolerance.

« Terakaft’s sound is the starkest and most compelling excursion yet into the sonic world of the Sahara. » Mark Hudson, The Daily Telegraph

"Different people, same story," Malian group Terakaft say of their music when compared to fellow Tuereg rockers Tinariwen. Much like the early days of Tinariwen, Terakaft's lineup has operated as a collective and the current incarnation of the group exists around members who between them have either been involved in playing the music for many years, or have grown up listening to it. "Assouf" desert rock is second nature to them as guitar lines unfold with a purity that runs like water.

Alone marks the group's first release since Kel Tamasheq in 2012, and the time away seems to have invigorated the group, whose fired up return is marked by guitars ringing with menacing fuzz and upbeat percussion aimed at dancefloors. Recorded by Justin Adams at Real World Studios, the group's fifth album has a direct groove that cuts through the whole album. While there may be a temptation to believe you have heard this before, there is always something extra to be found as escalating Saharan riffs unfold in the atmospheric arrangements, staying true to their 70s rock aesthetic and boosted by the poetic messages of the lyrics.

The group have recently been joined by founding Tinariwen member Liya ag Ablil (also known as Diara) who, from the late 1970s, helped create the familiar assouf sound within the collective. Their tapes were copied and shared among Tuereg people, helping the music spread throughout the northern Sahara. After missing the plane when the group made their international breakthrough around 2000, Diara left the group, and the guitarist and vocalist now joins his nephew Sanou ag Ahmed on guitar and vocals, with bassist Andrew Sudhibhasilp and drummer Nicolas Grupp. Sanou formed the group in 2000 with another former Tinariwen musician, Kedou, and previous members include bassist Rhissa ag Ogham, who died in 2010 in a car accident in the Sahara, Abdallah ag Ahmed, who left after a car accident in 2012 in Algeria and former bassist Pino, who has recently switched to acting – and has a lead role in the recent Timbuktu movie.

From the pounding drums of opening track 'Anabayou (Awkward)' the group address the struggle for those without drinking water and food due to droughts in the wake of events in Mali since the military coup in 2012. The album deals with themes of calling for unity - 'Itilla Ihene Dagh Aïtma (To My Brothers)' and to "stop telling stories and lies," as on 'Harambani (Nastiness).' On the latter, the message of togetherness is reinforced by group-chanted vocals, as twangy guitars split into dizzying north African riffs.

The sun scorched guitars on 'Amidinin Senta Aneflas (My Confidant)' maintain the stomping momentum with uplifting choppy rhythms as the lyrics tell of the closeness between those who have seen it all together. 'Wahouche Natareh (Lions)' suggests a turning tide is coming, as, "We warn the world that this year, We come with the truth all together." Diara's solo rendition of 'Anabayou' closes the album on a reflective note. The guitarist now heard alone, as if back where he started, as the album comes full circle.

Terakaft translates from the Tamasheq as "the Caravan", in reference to the nomadic lives of the Tuereg people. Alone perhaps signals that the dream is still as far away as ever. Terakaft find some kind of inner peace through their music, while offering a connection and hope to those experiencing something similar, wherever they may be. Different, but the same. 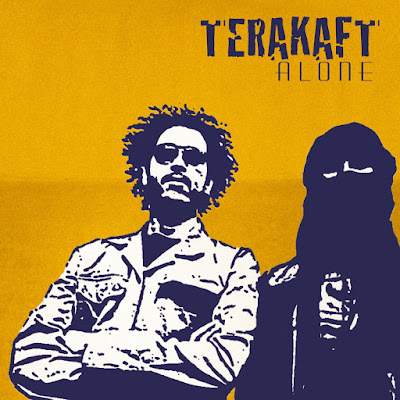