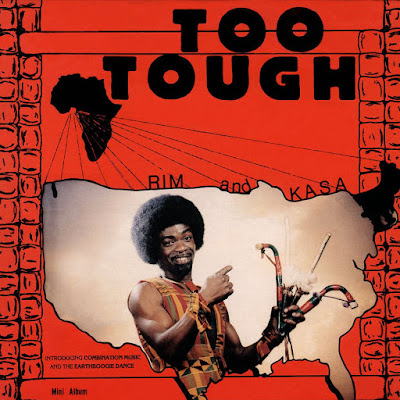 Following hot on the heels of our well-received reissue of his first album, Rim Arrives, we now present the two other key records that have made this a cult figure for lovers of both African music and ‘disco’ in its widest sense. Too Tough, a superb three track EP from 1982, on Sum-Sum Records, was credited to Rim and Kasa, whilst he issued the cracking 12” I’m Not Going To Let You Go as Rim And The Believers for Harmony Records the following year.

Too Tough kicks off with Shine The Ladies, an epic Afro-disco jam in call and response format, with the female lead vocals (Ms. Anita Berry) prompting a series of replies from the backing vocalists, setting the scene for a series of exciting solos set against a backdrop of punchy horns and swirling synths; tenor sax, guitar, drums (introduced with chants of ‘Play me some drums!’) and vibes all take a turn before the track fades out, clocking in just short of nine minutes. Next up is Love Me For Real, reminiscent of August Darnell with its girlie vocals and Latin flavour, ending with a mad swirl of synths and Rim’s own vocals. And lastly, I’m A Songwriter is cosmic Afro-reggae, bringing to mind Roy Ayers in his Fela phase, given a mad punk-funk twist … this one has to be heard to be believed!
The mood changes with I’m Not Going To Let You Go, which eschews the female chorus for an altogether mellower, instrumental ride, veering from out-there cosmic synth vibes to loungey jazz piano. It’s original flip, Peace of Mind, raw Afro-boogie track with a male vocal, is also included.
Those of you who had been searching in vain for Rim’s oeuvre for some years now having had it handed to you on a platter (well, two platters, actually), will be pleased to know that there is yet more material from the man Rim Kwaku Obeng to come from us at BBE …watch out for the digital-only release of four previously unreleased cuts from this legend of Afro-disco, taken from a long-lost acetate!

Labels: Rim And Kasa, Rim And The Belivers