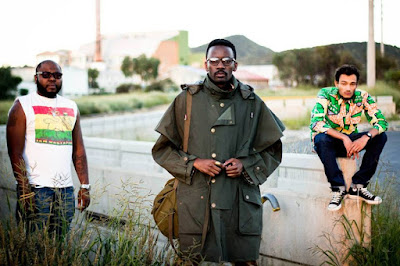 AFTER facing countless questions from fans on when their new album drops, Black Vulcanite yesterday announced that the day had finally arrived. And this time around, it was no April fool's joke.

Titled 'Black Colonialists', the album is a body of work that is themed around a Afrofuturistic theme as is evident from the cover art as well as most of the song titles.

Speaking to The Namibian soon after the announcement yesterday, Mark Mushiva expressed regret that it took so long for the album to drop but noted that is was unavoidable due to certain factors.

“It's really sad to say but a host of things kept us from releasing. Some of them included the fact that we had to migrate in terms of producers and had to start writing everything from scratch. I was also in Europe for quite some time so that played a role as well.”

The 19-track album, by the group, also made up of Nikolai 'Okin' Tjong­arero and Alain 'Ali That Dude' Villet, is well worth the wait, he said, and has a lot of hidden work as well as a concept art booklet. “We wanted to take time to make sure we really put out a very good product.”

'Black Colonialists' is heavily centred around Afrofuturism which is defined by Wikepedia as “a literary and cultural aesthetic that combines elements of science fiction, historical fiction, fantasy, Afrocentricity, and magic realism with non-Western cosmologies in order to critique not only the present-day dilemmas of people of colour, but also to revise, interrogate and re-examine the historical events of the past”.

Black Vulcanite has throughout their work gravitated towards this theme and this time around, went a little further. The cover art features African heroes such as Steve Biko, Nora Schimming-Chase, Andimba Toivo ya Toivo, Daniel Tjongarero Snr, Thomas Sankara, Niko Bessinger, Hendrik Witbooi and Mandume ya Ndemufayo. “When we conceptualised the album, we asked ourselves what we wanted to project. We weaved in all the concepts from our first EP and amplified them. Afrofuturism itself has always been central to the Black Vulcanite motif,” Mushiva said.

The group worked with producers like Maloon The Boom, BeatSlangers and Chris-Tronix as well as newcomers such as Martin Amushendje, amongst others.

Collaborations on the album are packed with surprises, including award-winning duo Star Dust who feature on two tracks, 'Brazil' and 'Waiting for God'. “We've always had a deep respect for a lot of Star Dust's work and after last year's NAMAs when we performed together, we discussed possible collaborations,” Mushiva said. The two groups soon went into studio together. “There was a deep synergy between the way they sang and our songwriting,” Mushiva said of the musical connection that blossomed.

The first video from the album is expected to drop this month but Mushiva declined to give a specific date, saying that they want fans to fully digest the album first.

For purchases, fans can check out the group's social media pages for the numbers of distributors. Negotiations are still underway to get the album stocked in local music outlets.


In 2005, Binyavanga Wainaina published his seminal How To Write About Africa essay. In it, the Kenyan author takes aim at the West for their one-dimensional depictions of Africa (war, famine, dying babies…that kind of shit). A year later, Wainaina’s essay grew into a book and still remains one of the sharpest pieces of satire and political insights in the continent’s literary canon.

This month, Namibian rap outfit Black Vulcanite released their debut album Black Colonialists – a follow up to their 2013 15-track ‘EP’ Remember The Future. As with their debut EP, the album is “a look back at the future”, with heavy Afrofuturist themes over neck-snapping snares, thumping kick patterns and jazzy melodies.

There are plenty of politics too.

“In the name of my fucking poor people, I summon you,” Mark Mushiva kicks off the album. On How To Rap About Africa the trio follow Wainaina’s tradition, knocking down one stereotype after the other. “Black, genocide, famine, safari…” the group lists on the chorus.

Given the collective nervous condition currently being experienced by black people, the world over, Black Colonialists comes across a message for the times. And as Wainaina did with How To Write About Africa, so too are Black Vulcanite staking a claim in constructing a new canon with their latest release. 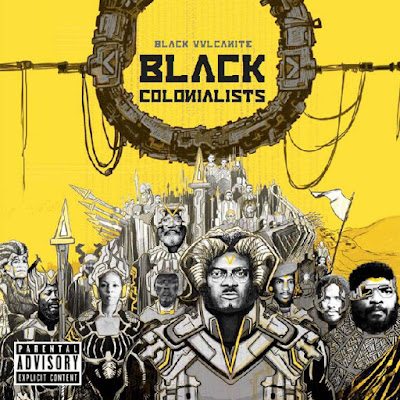