From Zimbabwe: Wells Fargo - Watch Out! 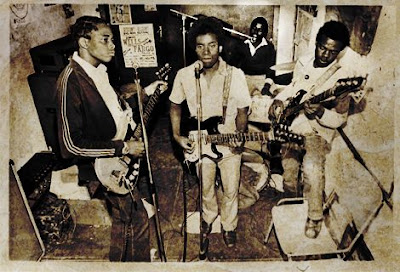 Every once in awhile an album or band comes out of nowhere and takes over your turntable. It doesn’t happen all that often, but it’s one of the best parts of loving this stuff in the first place and when it does, you feel like you’ll never be the same. And, dramatics aside, you probably won’t be. There’s a special kind of love you develop for music you wake up one day knowing nothing about and go to sleep feeling overwhelmed by. A special attachment you develop to the things that wreck you.

That’s how Wells Fargo’s album Watch Out! was for us. The people who made this record, and the world it came out of, make for the most compelling and heart wrenching story we’ve ever heard behind an album we’ve featured. No question, the history of this thing is going to shake you up. And the music itself is no less forceful. Released as a call to arms for a blooming civil war and kept from a full release by racist labels, Watch Out! is the kind of full frontal revolution rock that would have made flower children squeamish and Jimi Hendrix weep. There’s so much more I could say about it but we’ve brought in some of our favorite writers to do that for me and I can’t wait for you to read what they’ve put together. In the meantime, I’ll leave you with this: This album matters in the same way all the great ones do. Because of the freedom it brings whenever it’s played.

Wells Fargo were part of a counterculture that has been almost totally forgotten, even in its country of origin. In the 1970s, during the last decade of Zimbabwe’s War of Independence, rock music exploded with a message of unity and hope. Wells Fargo was at the forefront of the “Heavy Music” movement serving as fuel for the fight. Originally released as a series of singles, this is the first time their music has been released since its initial, limited pressing. More than four decades later we proudly present to you, in collaboration with Now-Again Records, Watch Out! for the first time in album form.

Don’t let the all-American corporate name fool you. Wells Fargo were an edgy, guitar driven and politically dangerous band from 1970s Rhodesia — a group that defied the odds of political apartheid and took incredible risks in performing their music. While their sound draws parallels to the more melodic works of Jimi Hendrix and (especially) Black Merda, Wells Fargo cut a unique take on rock n roll; one of haunting melodies and relentless rhythm.

At the time this style of music was known simply and appropriately as ‘heavy rock’ in Africa, and the groups playing in this style adopted the stance of peace, love and unity, all the while being seen as a crucial force in the liberation movement of the continent. Influenced by the screenings of Woodstock, several rock festivals were organized in the 1970s, proving to be culturally progressive — progressive in that they were fully integrated during a time in which segregation was still an ugly reality. “Watch Out”, the group’s most famous recording, was adopted by the liberation movement as a theme song, prompting the menacing investigative arm of the Rhodesian government’s Special Branch to spy on both the group and their fans. It was this political heat that eventually resulted in the brutal beating of the band by police following a concert brought to an abrupt halt. 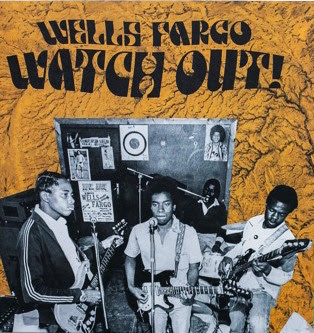