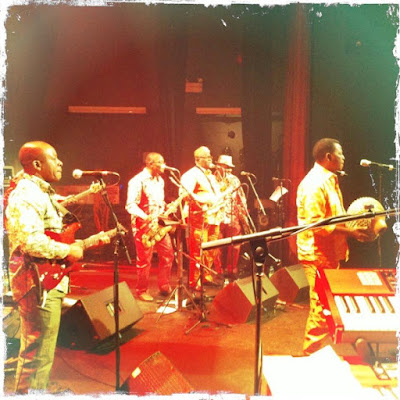 Madjafalao is the new album from Benin's Orchestre Poly Rythmo de Cotonou, a group which spans afrobeat and funk, mostly based around the tradition of Vodun rhythms. Its release next month will mark their first album since 2011's Strut-released Cotonou Club, which saw them share their first new, recorded music since the early 1980s.

With the new album out next month, you can check out a trailer for it below which features collaborator Calypso Rose singing their praises and talking about the connection that she made with the group despite a lack of joint rehearsals. As she simply puts it, "they are dynamite!"

The group was originally founded in Benin in 1968 by bandleader Melome Clement with the years that followed seeing them play alongside Fela Kuti and many others. Their name naturally originally came from the variety of rhythms that they would incorporate into their playing. The deaths in the early 1980s of original members guitarist Papillon and drummer Leopold, as well as Benin going into a period of economic hardship and decline under Mathieu Kerekou's dictatorship saw them enter into a hiatus.

In 2008, the band reformed with three original members and their last album was released in 2011 before the death of leader Melome Clement in 2012. A few months after his death, the rest of the group decided to keep the spirit of the group alive and continue in his honour, entering into the studio and working on music which now sees release on Madjafalao. It is out on October 21, via Because Music.