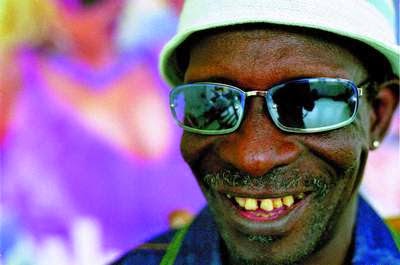 He was the drummer for Fela Kuti throughout the master’s groundbreaking years and has helped shape Afrobeat ever since. Ahead of his new album, Film of Life, Tony Allen chooses five top moments from his 55-year career.

Question Jam Answer was the beginning of Africa 70 finding very strong form. The personnel was changing a lot at that time, but this was a great lineup [including Ayo Azenanbor on bass and trumpet from Tony Njoku]. Fela was writing a lot of good songs at that time, and that’s why it’s difficult for me to say that I like this one more than the other. But Question Jam Answer stands out because of the composition, the way Fela wrote it, and my own drumming – which isn’t a common or a familiar drumming pattern – is something different. The approach that Fela brought when he wrote it was all about letting the music talk, and every time he wrote it was like a challenge to me and I like to face that type of challenge. I’m happy when I rise to it and people hear something and think: “Wow! That’s different.” When Fela wrote Question Jam Answer, some of his friends confronted him about the drumming and said: “Fela, what if this Allenko came to you tomorrow and said he was going to leave unless you gave him more money? You would have to do it because his drumming is too difficult to copy.” Nobody is going to take my place.

I remember when I had to stop drumming because I had an ulcer. So I was off for two weeks to get some rest. They hired other drummers to stand in for me but it was impossible for them. One drummer came in for a gig and couldn’t play the next night. So they came to wake me up while I was sleeping and put me in a taxi to play the gig. I said: “You have a drummer there,” but he said: “No, it is not working.” Few people have the kind of communication that Fela and I had when we played music, so I decided to go on stage even though I was ill. His friends were right though, as no drummer in the country could play what I played on that record. Only I could play it.

No Accommodation for Lagos was produced by Fela – he produced my first three records Jealousy, Progress and No Accommodation for Lagos – and after I left Fela in 1979 I made No Discrimination. I decided to do four tracks on the record which you would consider Afrobeat – up until then, Fela would do two tracks maximum on a record which were Afrobeat, but I wanted to give people more. Our approach was inspired by James Brown and his really long versions of songs. We looked at that and thought: “Why can’t we do it?” and created these songs that last God knows how many minutes. With Afrobeat, you need to respect the amount of time it takes to grab you. You can’t write Afrobeat for radio because they edit and edit and edit until the music is dead. No Accommodation was the final record I made with Fela as producer and was the beginning of the end for me as part of Africa 70. I never intended to leave Fela, but the way the album ended up and the time it took Fela to finish producing it made me think about what was going on. In the sessions, Fela also recorded some of his own tracks and that took three days, but mine took eight months to finish and they were recorded at the same time.

I remember he played his solo on the first day and I thought it was fantastic but he said it wasn’t good, so he wanted to play it again. So he played it again but that took two months and again he wasn’t happy. Then he played it again two months after that and the same thing happened. Then, finally, the one he used I wasn’t happy with, but he said that was the best. The mixing took another two months – so eight months in total. Fela was there every day but there were always excuses and at that point I realised I needed to quit the organisation. I finally went in November 1978 when we were at the Berlin jazz festival. We finished our gig and I told him I was leaving – not to destroy him, or destroy anyone, but just because my services were no longer needed. After that he used two drummers playing my parts separately.

The album talks about things that were happening at the time, such as the slum clearances in Lagos, clearing them out and bulldozing their houses without offering alternative housing, and you used to see many people sleeping underneath the bridge. People thought because I was talking about corruption that the police would come for me but they never did. I never mentioned anyone’s name individually. I accused all of them.

The critical response to [the 2001 album] Psyco on da Bus had been mixed. Some said I was going crazy and wasn’t respecting the rules of Afrobeat any more. I was just trying to explore musical areas and let listeners know Afrobeat could be mixed with other genres. So I tried to blend it with dub and electronica. People wanted me to play the kind of songs I played with Fela, but that style had gone. Fela was Fela; he was a genius and his style should be left alone. For someone like me, who left his group, to copy his style would have been wrong. If I wanted to do that I should have stayed with him. But critics didn’t like it, so I came back with HomeCooking which was an album filled with guests. I brought in Ty, who had remixed some of my work previously, to rap on the record and Damon Albarn, who had already sung about me on Music is my Radar. On the first day in the studio, Damon didn’t record anything because we were enjoying ourselves too much. He came with two boxes of champagne and everyone got boozed and he decided he’d take the music back to his own studio and finish it there. That was the beginning of our friendship and since then we’ve done a lot of different things.

Ernest’s label wanted me to feature on a record with him. I liked his guitar playing and the fact he used jazz, reggae and lots of different types of music. They invited me to the studio and he wrote music for everyone except me. I asked him if he was intending to compose my parts and he said no, because he wanted me to relate to what he was writing. It made me feel happy because it was challenging and it stopped me from being stagnant and getting used to just playing one type of music. I like to face an artist I’ve not faced before, especially when the artist has something unique. It’s interesting to work out how we are going to work together and what would work with what we both have.

For me, the key is to look for what works. I thought of many things I could have played on this album but I experimented and tried different options until I found what worked. I always respect the music that is in front of me and don’t impose myself on it. When I’m playing with someone else, you’ll know it’s Tony Allen, you will recognise my work without having to see my name. I have my identity.

This was something we decided to do after Africa Express in Lagos and we came back to London. Flea wanted to play with me, and Damon Albarn said we should create something while we were in each other’s company. Everything was done live, except the guest vocalists, such as Erykah Badu. I wanted Flea to play whatever he felt. I started the songs with my drum patterns and Flea would look for something that would go with my drums. It can be difficult for musicians who don’t have a background in African rhythm – I’ve been trying to mix up different styles and sounds in my head from day one. There are many places I can take my drumming and I try to make my drums sing and turn them into an orchestra. I don’t bash my drums. Instead of bashing, I caress. If you caress your wife, you’ll get good things from your wife; if you beat her, up I’m sure she’ll be your enemy. I’m creating different patterns with my four limbs. They are all playing something different, which means you need to split your mind into four elements with the one central idea running through. Even professional drummers can struggle with mastering Afrobeat.
Originally published @ theguardian.com