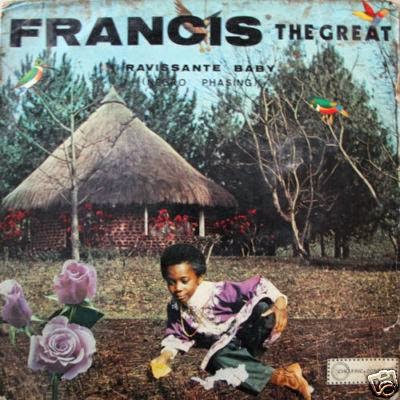 Wow! This is one of the greatest African disco - funk records ever produced - absolutely stellar groove. In essence a maxi, it's all about the B-side. Unheard and uncompiled.

'Look up in the sky (negro nature)' is a stretched funk groove with synth and a bubbling bassline added (probably by bass giant Vicky Edimo who produced the record). What makes this extra special is the lead vocalist, a 10 year old kid called Francis Mbarga (rumoured to be Prince Nico Mbarga's kid brother, but we can't confirm) who at the time was schooling in France. He sings/raps in parts of the song, in both French and English about the beautiful sky and the birds.  He did one more LP after this which is easier to find.

The other side of the LP contains a long jam in highlife style, again with the squeeky vocals of Francis.


One of the most amazing Afro Funk album ever!
Rare funk & Avant- Garde soul from  a seven years old kid singer featuring best of French and cameroonian musicians , recorded in Paris in 1977.

“Look Up in the sky” ( Negro nature)  is a stretched funk groove with psyche synth by Michel Morose , bubbling bassline by the great Victor Edimo , the famous Toto Guillaume on guitar , and a brilliant poetic song by Francis the great who at that time studied in Menilmontant (Paris) .

“Ravissante  Baby” ( Negro Phasing)  is a long hypnotic funky soukous track with a tremendous lead guitar with a long spoken word and soulful kid vocal about the beauty of nature .

Originally produced by his father , a great impresario of African artists in Paris during the 70 ‘s and coordinated by her mother  , this album is unique, fresh and out of genre in a way ! It’s universal Funk !

Hot Casa Records is proud to reissue this holy grail  after years of research on a deluxe lp including interview and officially licensed with Francis Mbarga himself  in Yaounde ( Cameroon) .