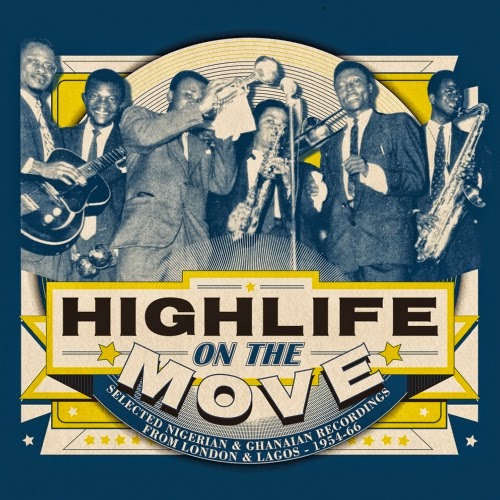 This 45 includes the two first ever recordings by a certain Fela Ransome Kuti with his band The Highlife Rakers. Recorded by Melodisc in London in 1960 both tracks have been unearthed after more than fifty years in hiding.


In many ways this compilation is a prequel of sorts to Soundway's groundbreaking Nigeria & Ghana Special compilations, telling the early story of modern highlife's foundation & formulation. It traces the music from West Africa to London, adding elements of jazz, mambo and calypso along the way and paving the way for the afro sounds of the 1970s.

Accompanied by a 44 page CD booklet and 12 page vinyl booklet, the notes by Dr. Coester include rare photographs, labels and advert reproductions alongside some stunning and very rare recordings.

This two-CD (or three-LP) compilation covers a period of musical history that remains under-documented but has been hugely influential on the ensuing half century. It brings together thirty-eight tracks by musicians of Nigerian or Ghanaian origin, recorded in Nigeria, Ghana or London, between 1954 and 1966. An indication of the music's vintage is that many of the tracks were originally issued on ten-inch 78 rpm shellac discs or seven-inch 45's; however, there can be no quibbles about the sound quality of the compilation. Those thirty-eight tracks feature some twenty-five ensembles, ranging from those including well-recognised names through to quite a few that have long been forgotten. Irrespective of that, the quality of the music is uniformly high; the compiler seems to have selected on that basis more than of celebrity.

The album opens with a track by one of the better known names, Nigerian-born percussionist Ginger Johnson, who settled in London after World War II and played in various jazz band and orchestras. In the fifties he released several singles that were some of the first recordings of African music released in Britain. In the sixties he played with many jazz and rock performers, culminating in his appearance onstage with The Rolling Stones at their Hyde Park concert in 1969. (Incidentally, Freestyle Records is planning a re-release of the album African Party by Ginger Johnson and his African Messengers.) His opening track here, "Highlife No. 5," plunges us straight into the distinctive dance rhythm of West African highlife music, a sound which dominates the compilation; the track's free-blowing horn breaks, also typical of highlife, are certain to appeal to any jazz fan with a pulse.

Another name that leaps out of the credits is that of Kwamalah Quaye; better known as Cab Quaye. This English-born Ghanaian was the son of bandleader Caleb Quaye and so was part of a musical dynasty that included his own sons Caleb and Finley Quaye as well as trip-hop star Tricky. Cab had an illustrious career in jazz bands and orchestras before rediscovering his African roots in the fifties and forming his Sextetto Africana which blended African and Cuban music, as illustrated by their track "Son of Africa" here.

But if any name here is guaranteed to make aficionados of African music sit up and take notice it must be that of Fela Ransome-Kuti. The future Afrobeat superstar arrived in London in 1958 to study medicine, but soon switched to studying music. By the start of 1960 his first recording—credited to Fela Kuti & His Highlife Rakers—had been released. Never before re-released, both sides of that ten-inch 78 rpm single are included here, entitled "Fela's Special" and "Aigana." Heard in isolation, each of them is a powerful, horn-driven piece that is compellingly danceable (and destined to be sampled, no doubt!) But heard in the context of the whole album, they do not stand out as being special, eloquent testament to the uniformly high quality of the music here.

Another later track by Kuti—with his Koola Lobitos ("cool cats")—is also included and it throws light on another aspect of London during this period. Entitled "Nigeria Independence," the track is one of three tracks here celebrating independence, another being "Ghana, Forward Forever" by Lord Ganda & Rupert Nurse's Calypso Band. Between 1958 and 1966, many Commonwealth countries became independent. So, during most of the period covered by this compilation, Britain was still a colonial power, with many London residents having been born in Africa or the Caribbean. Consequently, the city was a melting pot in which there was frequent cross-fertilisation between different musical cultures. As with the Cab Quaye track, there is frequent evidence of that throughout this album, for instance with elements of calypso being obvious is some supposedly African tracks. This was decades before the "world music" label existed, but the influence of one continent's music on another's was already happening.

In addition to its thirty-eight fine tracks, this album is a mine of information, including a forty-four page booklet of rare photographs and notes by Dr. Markus Coestler, highlife scholar and compiler of the album. Although it is undoubtedly of great historic interest, the music here is far more than that and will be a source of enjoyment for many, for years to come.