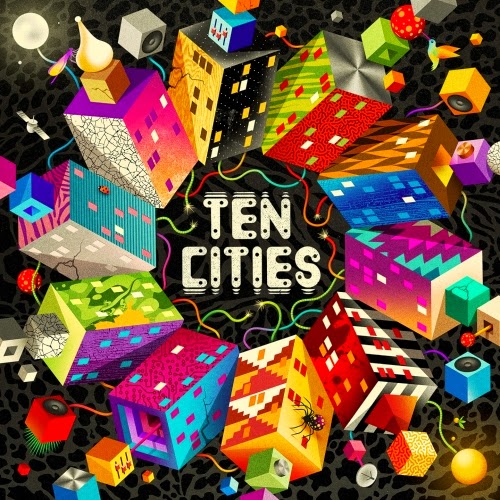 Soundway Records, along with the Goethe-Institute and Adaptr.org, present TEN CITIES a new compilation including, amongst many others, the likes of Bristol dubstep producer Pinch, Lisbon-based producer Batida and Kenyan group Just A Band, TEN CITIES is set for release on 10th November on CD, 3xLP and digital.

Between Autumn 2012 and Spring 2013 the TEN CITIES project brought electronic music producers and musicians from five cities in Europe (Berlin, Bristol, Kiev, Lisbon and Naples) to five cities in Africa (Cairo, Johannesburg, Lagos, Luanda and Nairobi) They were invited to collaborate and create, spending an intense time together making music in sticky studios and blacked-out rooms across the African continent.

TEN CITIES  put together approximately 50 electronic music producers and instrumentalists from the ten cities selected. They were invited to collaborate in studios over the course of more than six months. A selection of the outcome of these cross-continental experiments can be heard on this record.

It's no surprise that the results are far from what many would term 'World Music' and its often generic mixture of aural clichés, where all too often African music (as with that of the rest of the planet) from Mali to Madagascar, and from Morocco to Malawi is all filed under one ridiculous, meaningless genre.

TEN CITIES attempts to do something quite different: whilst searching for common ground it is also trying to highlight the differences. As a result hip-hop from the squats of Naples, bass music from Bristol, experimental techno from Berlin or jazz-tinged deep-house from Kiev are thrust upon the pumping kuduro of Luanda, the free-thinking crackled electronica of Cairo, afro-jazz from Lagos or the Sheng street-slang of Kenyan rap.

Epic is the word that immediately springs to mind when trying to describe the laudable Ten Cities project. Effectively a stab at grasping the global fusion zeitgeist by fostering links between musicians, DJs and electronic producers across two continents, its’ aims run deeper. While this kind of cross-cultural collaboration is nothing new, it’s rarely been tried on this kind of grand scale. Of course, it’s the musical side of the project that will rightly grab the headlines, with this sprawling compilation on Soundway Records being the conclusion of a three-year process of cross-cultural studio collaborations and suitably celebratory parties and concerts throughout Europe and Africa. Ten Cities also encompasses research and academic publications focusing on the distinctive club scenes in each of the selected cities. A quick glance at the project website confirms the sheer number of people involved behind the scenes – not just 50 or so musicians, DJs and producers, but a similar number of researchers, curators and project coordinators.

The concept behind this project from Soundway is sound, essentially posing the question: what happens when you put together electronic producers from across Europe (Bristol, Berlin, Lisbon, Kiev and Naples) with musicians, vocalists and producers from the African cities Cairo, Johannesburg, Lagos, Luanda, and Nairobi? If Ten Cities is the answer, it might not initially feel as wild and adventurous as you’d expect, but the more you listen the more it’s inner qualities rise to the surface. For the most part, the music does a good job in pairing distinctive African elements – percussion, traditional instrumentation, and vocals, in particular – with complimentary electronic music styles.

Interestingly, there are few moments that jar on the compilation, despite the range of styles covered – experimental hip-hop, smoky dubstep, punchy kuduro, and dreamy deep house, and some harder to define musical fusions all appear. It might take a while to get your head round it all, but it’s worth the effort. Ten Cities is not without it’s immediate anthems, most notably the alien kuduro of “Boom Boom Boom”, Octapush’s hook-up with Kenyan combo Just A Band, and the Jamaica-to-Africa-via-Bristol-and-Berlin dubstep bounce of Rob Smith, Jah Device and Sasha Perera’s “Work!. There is also some fine deep house material, including, surprisingly, a 4/4 track from Bristol dubstep don Pinch, but it’s the more unusual and compositions that hit home hardest.

“10 Henry Nxumalo Street” by Dubmasta, Hannes Teichmann and Leon Erasmus stands out in particular. Featuring the distinctive beat poetry of Afurakan, occasional blasts of discordant percussion, dub techno textures, bubbling electronics and sublime ambient chords, it’s an unusual but brilliant chunk of cross-cultural pollination. Given his pedigree, its little surprise Ukrainian artist Vakula also impresses with the thrilling, Sun Ra style space jazz of “Jozi Sunset,” a collaboration with Planet Lindela. Oren Gerlitz and Karun’s “Orange Green” proves to be a fitting finale; a sparse exercise in electronic soul and one last musical twist on a compilation that’s full of them.
www.junodownload.com 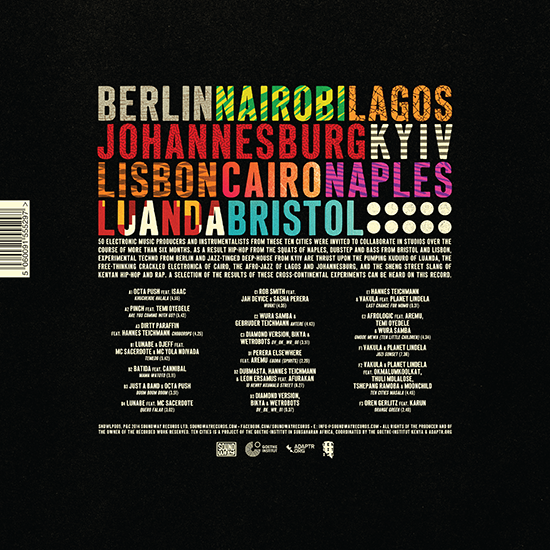