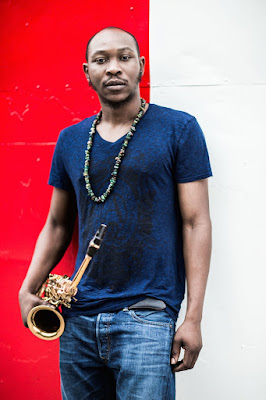 ... when his father let him join the band

The Afrobeat virtuoso reflects on growing up under Fela Kuti's tutelage—and what American culture can take away from his music today.

For most musicians, the first step on the road to becoming a master is having a good teacher, and Seun Kuti had one of the best. His father was Fela Kuti, inventor of Afrobeat—a steadily percolating combination of funk and soul with traditional African rhythms—and a political firebrand who enraged the Nigerian government with songs criticizing their corruption and manipulation. Afrobeat was more than just a musical genre—it became the voice of an oppressed people, offering home and encouragement when everything around them seemed bleak.

As a child, Seun would watch his father religiously, eventually working up the courage to ask for a place in his band. Instead of scoffing at his son's request, Fela welcomed him, and taught him how to deliver the music's rich political content while also delivering a stunning live show. When Fela died in 1997, Seun assumed his place at the front of his band Egypt 80 at the ripe old age of 14. Since then, he's carried on both his father's musical and political legacy, singing songs that dismantle unjust government systems and holding audiences rapt while he does it.

On a cloudy day in Manhattan, Seun spoke about the importance of carrying the message of Afrobeat forward, and the amusing reason why he felt he could stand toe-to-toe with his legendary father. Here's his story:

When I was eight years old, I went to my dad's show at the Apollo in New York, and after the show I said, "I want to sing." He asked, "Can you sing?" I said, "Yes!" I auditioned for him and he said, "You can start practicing with the band when we get back to Lagos." Music is not the easiest job, though. I had to learn how to stay in tune when I sang. During the first rehearsal, I was doing a little show, and my father said to me, "You can't be dancing! You can't be a star during the first rehearsal! You have to watch the band and get the cues right!" So when the first show came around, I just watched the band, and he came over to me in the middle of the show and said, "Why are you watching the band? It's showtime!"

When my dad died, the family wanted the band to break up—but we believed in music, and we believed in Fela. The only way to keep the band going was for me to say, "I'm Fela's son, I have a say, and I want to keep playing with the band." Not everyone agreed with me, but there were a few people in the band who believed in Fela's message.

Even as a kid, I knew my father stood for something. He never related to us like we were children. He wanted us to know that we were part of something bigger than ourselves. Our music is not just entertainment. It's a political statement, a musical statement, an individual statement, a social statement. The music came from a place of representation, a place of love. It's real love to use one's gifts to the benefit of everybody, and Afrobeat was created for that purpose—to give the voiceless a voice. It's the voice of the people.

I think American audiences share that spiritual connection to the music, but they don't share the political connection. An American can empathize, and do what he can through his own system to stop whatever negative impact his system is having on our system. But I don't see African problems primarily as a problem for America, and I'm very skeptical of Americans who say that they are. What is important to me when we're playing for American audiences is that they take away the importance of the music, and how it can affect their own personal lives positively. How the message can help them become better human beings is important to me. It's important to understand that, as Africans, we have to be the ones to tell our own stories. The importance of our lives cannot be more important to any other person than we ourselves.

For me, the major thing I learned from Fela is that he did what he wanted on stage. The stage was his throne, and he wanted that to be his own moment, free from any other kind of obligation or compromises. His stage was a place of honesty and of him being in his complete element. That's something I always take with me on stage. It's where I can be me completely. I'm not compromised, I don't have to explain myself. I can just be what I want to be.