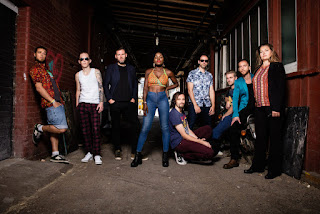 Hard-driving, politically-charged, rhythmic, irresistibly-danceable music; what else could be expected from a band that mixes influences from Fela Kuti, Parliament/Funkadelic, Frank Zappa, and Nile Rogers and Bernard Edwards into one exciting and uplifting musical pot? Such expectations are high, but the London Afrobeat Collective meets them with ease.

There have been a few personnel changes since Food Chain (Self Produced, 2015). Percussionist Zak Cohen has left without being replaced, Giuliano Osella is now on drums and, most noticeably, Juanita Euka has replaced Funke Adeleke on vocals, so the band has pared down slightly to a nine-piece line-up. Euka's voice has a lower range than Adekele's, but it's just as powerful, with a rough edge that gives added force to the anger to be found in many of the lyrics. Euka's vocal power is matched by that of the instrumentalists; this is a mighty band of musicians (and video evidence—see YouTube, below— suggests that the band is a superb live act as well).

The London Afrobeat Collective formed in 2009, so this release celebrates its tenth anniversary. Following the pattern of Food Chain, Humans combines politically forthright, socially aware, lyrics with powerful wall-of-sound music. All of the songs are credited as whole-band compositions and, for the most part, focus on ensemble performances—highlighted particularly on "Prime Resources," "Stop Talking" and "Tolembi" where the horns fly in unison above the punchy rhythm section. There are some strong solos, too. Taken together, this three-pronged attack of voice, ensemble and solos makes Humans one of the best of 2019's releases.

This album goes to show the importance of context when listening to music. London Afrobeat Collective’s self-released third album ‘Humans’, embodies their live performances. The project is treated as a set list rather than an album, and that’s worth bearing in mind when listening to it.

Having been lucky enough to see them support Femi Kuti last year, the positives and negatives here are also the same as they were that night too: a tremendously upbeat album that will get you moving, but at the same time can be difficult to listen in one go, with little variety from song to song (save for Tokomona).

As a general rule, Afrobeat - a genre made famous by the legendary Fela Kuti - is a mix of jazz, funk and rock, with simple, repeatable lyrics and platitudes punctuating the instrumentation. This is a genre with a strong identity, often relying on powerful an almost God-like figure at the centre, controlling the band and audience through their lyricism and presence. Fela was well-known for this and even founded his own small pseudo-state through his charisma and sheer force of will.

London Afrobeat Collective have taken this identity, and rather than trying to change it too much have simply added to it embodying the strength of their own singer: Juanita Euka, putting female empowerment front and centre in the album (something that arguably was not Fela Kuti’s primary concern).

From the very first note of the album it’s clear what it’s geared towards: dancing and chanting back and forth with Juanita Euka more than ably assisted by the tremendous band. However, to really hear and appreciate the nuance of its parts, the project needs to be heard through a decent sound system – there is so much in the production that through small speakers, or even through decent headphones, too much of the magic will be missed.

There are some stand out songs: ‘Tolembi [We Speak]’, ‘Tokomona’, ‘Stop Talking’ and especially ‘Walk Alone’ make the album. However - much like their live set - each song melds into the other so much so tthat it’s possible to dip in and out of the project at any point and not quite know which track is playing.

In places the pieces can be slightly laboured too, with rambling sections that could easily be cut to bring song running times down. Live, this works - giving time for people to dance and become a real part of the music, building atmosphere in the room - but on an album it can feel a little self-indulgent.
Overall, though, this is a positive project. Some great musicianship with the horns particularly stand out from the mix. As the name of the band hints, it’s a homage to Afrobeat rather than progressing the genre - but this should never get in the way of having a good dance. 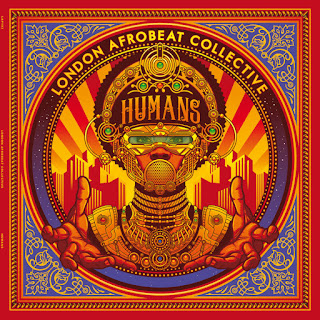