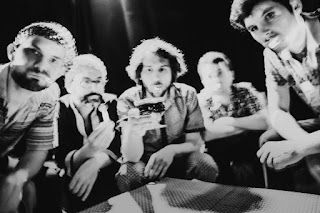 German quintet Onom Agemo And The Disco Jumpers continue to evolve, straying ever further from the instrumental band they still were on 'Cranes And Carpets', their 2015 debut album. 'Magic Polaroid' was recorded in just three days at the Berlin Butterama Studio of Daniel Nentwig and Sebastian Maschat. The cover image of the album, artwork by Nicholas Henderson, is of course a reflection on album title 'Magic Polaroid', but is also a nod to the kaleidoscope of genres the band manages to weave together into a conjuring blend. In opener 'Trumpets Of Denmark', Natalie Greffel's screaming vocals almost sound like a political manifesto. For the psychedelic 'Bonne Trance' the band was clearly inspired by the Maghrebian gnawa tradition, including krakebs (thanks to guest percussionist Maria Schneider), while in 'Welcome Eko' clear echoes from the Indonesian gamelan tradition can be heard. 'Broken Silences' opens very fragilely, but evolves into a kind of Brazilian Afro-jazz in which especially keyboardist Jörg Hochapfel and saxophonist Johannes Schleiermacher can fully indulge themselves. On 'Magic Polaroid', Onom Agemo And The Disco Jumpers certainly sound even more freaky than they did on its predecessors, but this remains fascinating music none the less.

Ever since Onom Agemo & The Disco Jumpers broke the dreaded curse of the difficult second album by releasing Liquid Love (2017), a cocktail so spicy and delectable that it could warm the cockles of the grumpiest man alive's heart, even in the most Arctic conditions, everybody wondered how the Onom crew could top that one. But now you have an opportunity to whip out your Magic Polaroid as proof that this wasn't an impossible project. Never before has the band so successfully captured their full-on live sound as they do here, thanks to three days of recording frenzy at Daniel Nentwig and Sebastian Maschat's Butterama studio, a haven of analog hardware hidden in a remote part of Berlin's Neukölln district. The exploding kaleidoscope of styles that make up this album, perfectly reflected by the stunning cover artwork from Nick Henderson and photography by Christoph Rothmeier, means that they can no longer be confined to their early description as an Afro-funk quintet or merely described as a lively tribute to the artists which have influenced them; their sound is 100 per cent pure uncut Onom Agemo, even though every track feels like a new beginning. The presence of a charismatic in-house vocalist who brought her own lyrics along has also boosted their confidence considerably and provided a further knock-out punch to their onstage performances. No one will be disappointed as soon as the first bars of "The Trumpets Of Denmark" stomp on stage like a boisterous fanfare, with Johannes Schleiermacher's impressive wall of sound production making the musicians sound like a much bigger band than what their line-up suggests (with Maria Schneider from Andromeda Mega Express Orchestra adding some extra percussive clout) and just the right amount of dizzying cross-rhythms to steer it away from potential bombast. When Onom Agemo's powerhouse vocalist Natalie Greffel starts chanting what at first sounds like a string of onomatopoeia, it soon becomes clear that she's laying down her manifesto for a nostalgic space-age yet to come, with a few key words serving as mantras (focus, patience, tears, and creation). This is an invitation to drive off the information superhighway and its endless litany of polite noises, to redirect our gaze inside ourselves and learn to understand and sometimes question how others perceive us. 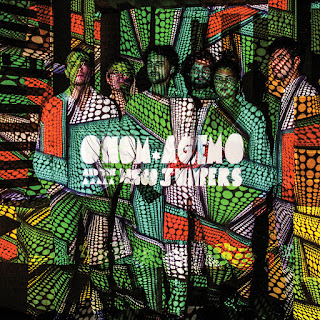