"It's Not About The UK, America, Or South Africa... It's About Global Culture" 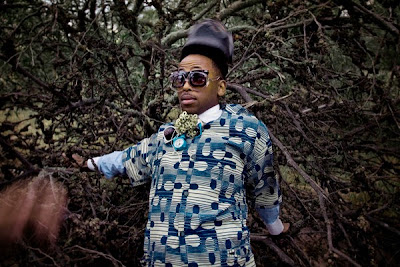 Fantasma are not a band. At least, not in the traditional sense. They're a collective, whose rich background is as culturally eclectic as their home country of South Africa. Like South Africa, they draw on a vast range of influences—from the contemporary, to the traditional—processing all of that into something pan-global with a rich heritage. In fact, the more Spoek Mathambo told us, the more it felt like Fantasma are a microcosm of South African culture; vibrant, boundlessly enthusiastic, and inventive.

Free Love, their debut album out on March 9, may not be out yet but we've already been treated to the first single, "Eye Of The Sun". We're not impatient, mind you: Fantasma are a group of talents you could never hurry, even if you wanted to. The fruits of their labour have come about in a way that is, if you excuse the embarrassing cliché, organic. There's no blueprint for how to write a Fantasma song, indeed much of it was birthed from countless hours of jam sessions, improvisations and spontaneity—none of which can be recreated.

Spoek Mathambo, often held as the frontman, has had an extensive career in music which has seen him collaborate with traditional South African musicians from the local townships, French electro producers and, of course, Fantasma. He speaks candidly with Complex UK about his new "collective", his colourful past, and his busy future.

You’ve collaborated with lots of artists in the past but you said it felt "dishonest." How has the democracy of being in a band affected your music?

Well, I don't think 2015 is really a time for the conventional band. Things with Fantasma still work in lots of different ways; in terms of who starts a song, not everybody is on every song. No one in particular starts any song. The term "band" has a lot of its own implications, and I think of us as more of a collective and it's not a collective that ends with the five of us, there's a lot of other people that we work with.

There's a lot of different elements and you all come from such different backgrounds. How do you balance all these influences without it becoming too overcrowded?

If you listen to the album, you can just hear how we've moved away from putting everything upfront. The first song we ever did, I think, was "Eye Of The Sun" and, since then, we've probably done 25 other songs. "Eye Of The Sun" is everyone kind of going full-steam, going crazy! Since then, we've all learned a bit. Bhekisenzo's 45 and his background is in really traditional Zulu music, so he didn't even really get the electronic side of it. He doesn't listen to that music, it's not of his world, but since working with us he's really found his unique voice within the group. As the year's gone on, from month one to month two to month eight, when we put the album together, made huge leaps and bounds and it was some of the best music I've ever been involved with writing. It's very streamline.

A lot of the band speak different languages. Did that make writing and recording together challenging?

Well, South Africa has 11 languages either way, so it's how I've been raised. I think, for a large part, white people have isolated themselves from learning a lot of the African languages but I've been raised in neighbourhoods, and even in my household, my mother's a Khoe-San, my dad's a Dewani. I grew up in a Soto neighbourhood in a Zulu town, so, you know...


Do you think non-western music is being taken more seriously now? It seems like people are more understanding of the cultural nuances.

The most interesting thing, for me, has been club music. South Africans took in Chicago house in the late '80s and early '90s then, in the late '90s and 2000s, we fed the world back our version of house music. On dancefloors, when you're playing in clubs, it's not like that world music scene that your weird barefoot aunt went to. Those songs are played a lot in the club. It might be in Miami, it might be in Ibiza. There's just more of a global club language. Also, within that, there's been all sorts of different club scenes, such as kuduro or Baile funk, with all the vibrancy of a club that you couldn't lump alongside "world music." I think that movement that's happened over the last 15 years has been vital to shifting people's ideas of what contemporary non-western music can be.

Do you think South African artists are a bit more open to eclectic influences, not worrying about what scene it's from or whether it's cool?

I think, at this point, it's not about the UK, America, or South Africa... It's about global culture. It's about the internet. It's about living in the information age where those walls and tribes have been broken down. It's not 1991, where you have to be a head-banger and have long hair and only listen to these bands from this place. A lot of people are still obsessive in that way but, for the most part, you can be as into heavy metal as you are into grime nowadays. It's changed.

Back to Fantasma, when you're playing with the collective, does it feel like you can collaborate on a deeper level, working with them on a more long-term basis?

Over the last year, I've been really dedicated to Fantasma. Since December though, we've been working on a whole new suite of music, which is even further in and we're gelling even more. It's just a continued journey, and hopefully we can have a long relationship working together.

You recently completed work on the Sound Of Mzansi documentary. How does filmmaking compare, as a medium, to music?

Well, the process is a lot longer. We went all the way from pre-production, from being on all the shoots to preparing all the interviews, and then the editing, grading, and post-production. We took on the project in its entirety. Compared to music, it's so much less immediate, more long-term. With music, you can get in the studio and release a song tomorrow! There's a lot of labour in filmmaking. There's so many small things, like even down to transcribing the film for subtitles!

You were once asked if Fantasma would be touring more but you said you wanted the band to "build up the telepathy" before touring too much. Are you at that level yet?

The shows are just getting better, and better. You get to a certain point where you only get better by playing, but there's a lot of stuff that rehearsal can't take into account. There's a lot of spontaneity that needs to be driven and inspired, and that's where we're working towards. We just want to have fun, and be expressive. It's not about the sloppiness, it's really to loosen up and just be spontaneous.

When Frank Zappa auditioned people for his bands, he would test their ability to improvise and adjust to spontaneous changes in time signature. Do you have a similar audition process?

[Laughs] No! That's not really what it's about. What I feel like I'm doing with the documentary, capturing this moment in time and documenting what's been happening over the last five years in South African electronic music, it's of broader cultural significance than that. It's not athletics, you know? I don't mean broader cultural significance, in terms of posterity, it has significance for the artist to realise the broader global context of their work. So people coming up in the same dingy ghettos and townships, to see what possibilities are. Most of the people we profile aren't really in the limelight, and it's the same thing with our collective. I met DJ Spoko while making the film, actually.

Right, so what's coming up for Fantasma, and yourself, for the coming months, years?

We've got our SoundCloud that we post bits and bobs that we're working on, so check that out. In terms of the next releases we're be doing, there's going to be 12"s coming out, all kinds of dubs from the camp, and more collaborations with different producers throughout South Africa. I'm just going to bunker down and bring in a lot more of the exciting producers, vocalists, and instrumentalists in South Africa. The Fantasma family's just getting wider and more interesting, and the sounds are getting more solidified.