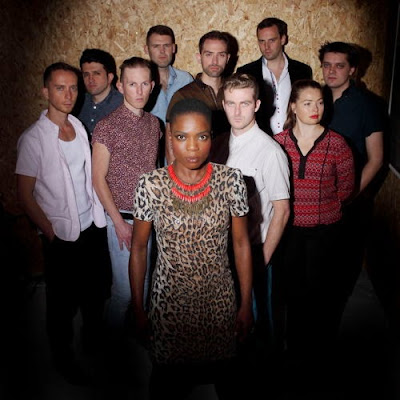 25th May 2015 marks the release of 'Food Chain', the brand new album from contemporary Afrobeat trailblazers and firm festival favourites London Afrobeat Collective. Having been at the forefront of London's live music circuit and attracting a plethora of international bookings following theirself titled debut L.A.C, the 10 piece collective set out to encapsulate the energy generated during their live performances and combine this with a newlyevolved songwriting ability and refined musical prowess.

'Food Chain' is without doubt the band's best work to date, representing a new level of discipline for the group, keeping true to the original principles of the Afrobeat movement and paving the way for its future as a unique and exciting genre to be heard and enjoyed globally.

Their eponymous debut album, successive single releases and remixes have been supported and endorsed by the likes of Questlove (band leader of the Roots) on 'OkayAfrica' and BBC Radio 6 Music's Craig Charles Funk and Soul show. The band have also performed live on Radio 4's 'Loose Ends' programme presented by Clive Anderson and have earned rave reviews in the national press including The Guardian and Time Out.

The band have also recently confirmed a tour of Nigeria, where they will play four shows across the country as part of the annual 'Felebration' festival.

'Food Chain' cements London Afrobeat Collective's reputation as one of the most unique and exciting bands in the UK today, having created a highly accomplished work with international flair that's culturally relevant from London to Lagos.


It's based in London, it's a collective and it plays afrobeat, a strongly rhythmic musical style associated particularly with Fela Kuti. That's the basic info. Much more importantly Food Chain, the London Afrobeat Collective's second album (there are a couple of EPs too), is a bit of a monster—full of dancefloor-filling beats, allied to politically-aware lyrics, delivered by a 10-piece group that's bursting with energy.

This mix of politicised lyrics and dance party music recalls UK bands of the '80s such as Working Week. The London Afrobeat Collective is blessed with a tight, funky, rhythm section. It's the heart of the band, beating as hard and as fast as the music demands. Indeed, most of the musicians are part of this section—bassist John Matthews, guitarists Alex Farrell and Alex Szyjanowicz, percussionist Zak Cohen, conga player Lee Crisp and drummer Farivar Gorjian form a powerful sextet.

With such a strong and savvy rhythm section in place, the horns—Andy Watts on trumpet, Edmund Swinburn and Klibens Michelet on tenor and baritone saxophones—need to be confident and assertive. Collectively and individually, they are. As a section, the trio bursts out with immediately catchy riffs: the occasional solos are crisp and melodic.

Vocalist Funke Adeleke has a strong personality and an equally strong voice. They enable her to stamp her authority on the songs, delivering the strident and direct lyrics with conviction—there's never any lack of clarity on songs like "Celebrity Culture," "I No Be Criminal" or "Prejudice"—and with a vocal power that heightens the impact of the music laid down by her bandmates.

Solos are relatively infrequent and when they do appear they're generally brief but memorable—"Say What You Mean" and "First World Problems" feature attacking guitar solos (unfortunately there's no information as to which of the guitarists gets the credit); on "Prime Minister" it's the sax players who each make an impact. But the London Afrobeat Collective isn't about lengthy solos, it's about the sheer musical power of a ten-piece band in full flight. Food Chain is the product of a band with a message—a message allied to some of the finest music for dancing one could wish to hear.
allaboutjazz.com


Living the cloistered life that I do, Afrobeat, as a genre, hasn't clicked on my awareness gene, until now - not much call for that sort of stuff down 'wor street'.
Which is more the pity as it's great music to boogie to - I'm sure that if I played this on a summer's evening at full blast and opened the living room windows, the neighbours would be out in force either dancing on the Green or telling me where to go and it wouldn't be to Africa!

London Afrobeat Collective are favourites at festivals as contrasting as Glastonbury and Cheltenham.
Their music slots in easily at either.
I don't understand many of the words which Adeleke sings but it doesn't matter as they are anthemic songs with socially conscious lyrics which may be applicable in the current electoral climate although the album isn't released until May 25.
Adeleke chants almost non-stop (or so it seems) with the horns blowing power riffs over hypnotic ethnic rhythms and occasional wild solos that  hit the ozone layer with such intensity that Climate Change could be laid at their door - not to mention damage to flooring by the foot stamping their music inspires - they probably also have the secret of making rain.
I'm reminded in places of the Grand Union Orchestra but this is even grander!
Music is for everyone came through in one of the more lucid vocals and no one will argue with that - apart from, maybe, the Arts Council of GB!
lance-bebopspokenhere.blogspot.com

Afrobeat is one of the great party sounds, and in recent years in terms of UK bands best influenced by the traditions of Fela Kuti a number of outfits, chief among them, Soothsayers have set the bar high, appealing to both African music and jazz fans alike.

Joining Soothsayers in terms of quality yet delivering a slightly more orthodox approach are the London Afrobeat Collective who return five years on from the release of their self-titled debut.
Sticking close to the core Afrobeat sound in their harnessing of that pulsating vital wave of beat-heavy infectious grooving, a siren call for dancers, the Collective have made some line-up changes and now is looking like: singer Funke Adeleke, a forceful presence who also provides most of the socially and politically-charged lyrics plus guitarists Alex Farrell and Alex Szyjanowicz, trumpeter Andy Watts, saxophonists Edmund Swinburn and Klibens Michelet, conga player Lee Crisp, percussionist Zak Cohen, bass guitarist John Mathews and drummer Farivar Gorjian.
Food Chain is a well-recorded studio album produced by Leon Brichard from the Fontanelles bookended by ‘Celebrity Culture’ and ‘Prime Minister’ the latter which, as a single, has already received the remix treatment. A lively dancey affair which I think would be far better experienced live, the lack of development beyond the strictness of the core sound more of an issue listening on record than in a live setting. The style certainly doesn’t allow for a huge amount of improvisation beyond the set patterns and I think for jazz fans this may be a factor. However, the band display plenty of skill and joy in the execution of the collectively-written material and that’s more than enough to make this all a very satisfying listen. 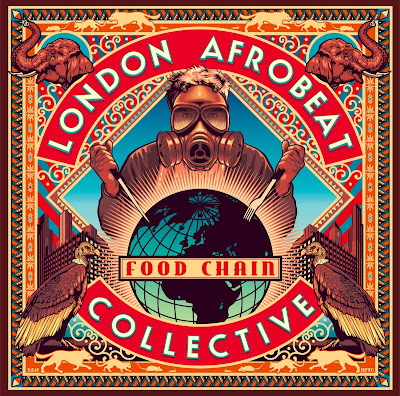