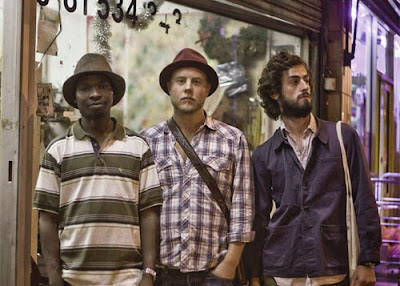 At the very least, this is some of the most joyous, life-affirming music out there. The Very Best's debut album finds Malawian singer Esau Mwamwaya and London-based production duo Radioclit (Etienne Tron and Johan Karlberg) more than making good on the promise of the internet mixtape that introduced their partnership to the world. That tape, one of 2008's most celebrated (and celebratory) releases, displayed a truly boundary-defying yet immediately cohesive and recognizable sound: a euphoric global mélange of pop, dance, hip-hop, world-folk, sunny indie rock, electronica, cinematic new age lushness, and the African sounds of marabi, highlife, and kwaito, all highlighted by Mwamwaya's deliriously infectious Chichewa crooning. This time out, without the launch pad of familiar source material that sometimes made the mixtape's slew of remixes, interpolations, and covers feel slightly like a cheeky arithmetic mashing-up of reference points, the threesome have crafted something even more distinctive and organic, dissolving together their panoply of influences into a set of songs (not merely "tracks") that feel blissfully free of formulas and forerunners.

To be sure, The Very Best's sound is essentially an extension of the globalism already increasingly prevalent in 21st century indie and dance music; a connection reaffirmed by a pair of delightful guest appearances from two of that trend's most visible exponents. Ezra Koenig of Vampire Weekend, whose "Cape Cod Kwassa Kwassa" was marvelously reworked on the mixtape, returns the favor here by duetting with Mwamwaya on the album's irresistibly effervescent title track. The other big guest shot, naturally enough, is from M.I.A., reigning monarch and mascot of globetrotting beat excursions, who can't help but inspire some smiles on the silly, spunky "Rain Dance." But Mwamwaya hardly requires a famous foil to be utterly captivating. His voice, which is often multi-tracked into toothsome harmonies, is equally capable of conveying majesty, urgency, and exuberance; sometimes -- as on the giddily anthemic "Julia" (which borrows a bit of "Paper Planes"' lazily loping swagger) -- all three at once. But if that voice is undeniably essential to the group's sound, Radioclit's contributions shouldn't be understated either: Karlberg and Tron have outdone themselves with a kaleidoscopic array of Afro-leaning grooves to complement Mwamwaya's contagious melodicism, relying remarkably little on their typically gritty, muscular "ghetto-pop" style. While there are some traces of more straightforward club-derived rhythms - the percussive "Nsokoto" and glittery "Mfumu" both gesture toward disco's 4/4 thump, while the string-laced "Kada Manja," in an amped-up variation on the mixtape's "classical" version, flirts with the hard-hitting sound of kuduro - most of the album is eminently danceable without slotting neatly into any specific idea of "dance music."

But as vivacious and energetic as it is, there's something even more fundamentally potent and potentially profound going on here (not to suggest that dancing isn't profound -- indeed, that might be precisely the point). Take "Chalo," an unabashedly uplifting barrage of Enya-esque synth stabs which was reportedly (amazingly) recorded on the same night that the group's three members first met, and whose lyrics they've described as about "using love to stop the world's problems." This is the sort of thing that helps explain why The Very Best can sport such a ticklish moniker with such evident aplomb: somehow, with these guys, it comes off not so much as a boast (albeit an improbably credible one) but as an encapsulation of the boundless optimism and idealism reflected in their songs and in their sound -- a fervent, infectious belief in music's power to bring out the very best in the world and in the human spirit.
allmusic.com

The problem with hearing so much music is it gets harder to be surprised. But this album defies all preconceptions and never settles into a genre that you could name and locate on the shelves or download menus.

From the minute it starts, there's an authority to the production, as if it knows what it's doing and where it's going. The sounds are well-recorded and neatly balanced, and, just as you start to realise that you don't understand the words and can't figure out which country the singer is from, you've reached track three and somebody is singing in English. Check the sleevenotes and you find it's Ezra Koenig from Vampire Weekend, singing impressively high and passionately on the title track, a duet. Quite what he and the other singer are saying is hard to ascertain. Are they celebrating the PLO?
Either way, having established that Warm Heart of Africa is no ordinary record, I go back to the opener, Yalira, and it becomes apparent that there are some words in English on this one, too, with references to Malawi and Bob Marley, but the nationality and style of the music remain unclear. The keyboard on track two (Chalo) plays triplets like on Supertramp's Dreamer, and the whole song has a retro 80s feel, harking back to Peter Gabriel and Salif Keita. All very impressive, but neither track feels like a proper song. That problem evaporates with the strong melody of the anthemic Warm Heart of Africa, though I'm still baffled by the reference to their "favourite PLO".

There's an impression of a band, with a lot of voices on several tracks, on this collaboration between the European production team Radioclit – who used to host a radio show on the internet and who refer to their sound as "ghetto-pop", combining as it does hip-hop and grime, along with myriad African dance styles – and the Malawian singer Esau Mwamwaya. Improbably, they met in Esau's second-hand shop in east London's Clapton, where one-half of Radioclit, Frenchman Etienne Tron (his colleague Johan Karlberg is Swedish), had gone to buy a bike. They surrendered to fate and decided to work together.

Warm Heart of Africa is reported to have evolved out of a mixtape sent out to various tastemakers towards the end of last year, when it was listed in several top 10s. Encouraged, Radioclit decided to produce this 13-track album, which, after those first few more-or-less normal songs, switches gear into what could be classified as dance music, although it never surrenders to a cliched four-to-the-floor bass drum. Instead, a variety of backgrounds are laid down for Esau to sing over; often multi-tracked, these sound like the work of a vocal group. On Julia, a squeaky electronic keyboard wails away in the background, while MIA joins the fray on Rain Dance, chanting over a jungle drum track. A string quartet slow things down elegantly on Kada Manja until, finally, a multi-voice choir on Zam'dizko brings Warm Heart of Africa to a standstill. The more I listen, the better it gets, especially towards the end of the album.

The live clips of the Very Best on YouTube suggest an almost chaotic stage presence, and this very easy-on-the-ear debut may inspire many imitators.