Fela Kuti and the Africa Shrine 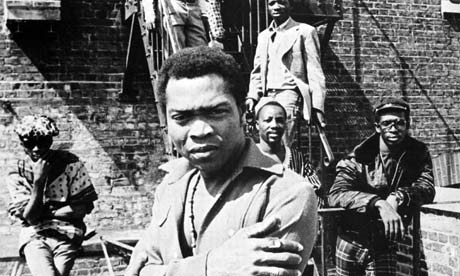 There are scores of famous venues around the world. They have their lore, their history, their famous nights, their famous bands. All of these places are important and relevant. History is not a competition; this is not an article about the best venue. This is just the story of one venue, built for the sole reason of providing one man a pulpit to stick it to a string of dictators in one of the most politically volatile countries in the world. Well maybe that’s an overstatement. Maybe it wasn’t built for the sole reason of sticking it to a dictator. It was also built as a place for a new sound to be born, to grow, and to transform a country and a continent. Consequently, it was also a place for people to shake a lot of ass. To sweat into the morning. And to dance a few guns to silence.

The social and political climate of Nigeria is as hot as its summers. Africa’s most populous state is home to over 250 ethnic groups and over 500 living languages; there is a Muslim population split between majority Sunni and minority Shia and a Christian population equal parts Catholic and Protestant. Among them are myriad indigenous religions and a smattering of Hindus, Jews, Bahai, Krishnas and other religions.

Unifying a nation this diverse comes at best with complications, at worse with severe tragedies: since Independence from British colonial rule in 1960 Nigeria has been subject to numerous military coups and a 30 month civil war which ended in 1970 saw the death of up to 3 million people. After 1970, enough oil was discovered in Niger delta to make Nigeria the world’s 8th largest exporter of oil, a blessing to some extent, but a naturally double edged sword as the power oil brings creates a vacuum that leaves in its wake a host of human rights abuses and social problems, especially in politically fragile states. As a result, military rule endured for the next 30 years. It was a rule which saw numerous generals under numerous coups in a country where the careers of dissenters often ended at the end of a rope.

In one of its most famous cases, writer and Ogoni activist, Ken Saro Wiwa was executed in 1995 for his outspoken voice against Shell and its collusion with the Nigerian military in human rights abuses and environmental degradation on Ogon land. His judicial murder was met with international condemnation. Nelson Mandela called it a heinous act.

But Saro-Wiwa was not Nigeria’s loudest activist and government critic.

Not by a long shot.

It was not Chinua Achebe, author of the great African novel ‘Things Fall Apart’. It was not even Africa’s first Nobel Laureate, Wole Soyinka.

To qualify as a the loudest and most popular anti-government critic in a country as volatile as Nigeria, you would first have find your pulpit. To do so would require you to forego your overseas training as a doctor and choose instead to become a musician. So that people would gather at your pulpit, you would then have to pioneer a music style that would be known around the world and long outlive you. Following or during this near-impossible feat, you would then carve out a small plot of communal land for your band and your studio and you would declare to your military rulers that your land and your musical pulpit is independent from their rule. You would then strip away any references to slave or European references from your name and marry 27 women.

Your music would accomplish what no government could. You would unite a diverse Nigerian population on a hot dance floor in Lagos while a very large band played very long songs that would leave spectators a sweaty mess by morning. During the night, your audience would hear you rip into the government, calling officials out by name for their corruption, and calling on your audience for action and social justice for the poor. Your music would be such a threat to the power of a men who rule with machine guns and intimidation that to stop you they would have to send a thousand soldiers to burn down your commune with all of your instruments in it, beat you to near death, rape the women of the commune, and throw your mother out of a second storey window. In an act of protest you would deliver your mother’s coffin to the doorstep of the nation’s dictator. Despite the fact that you would see the inside of a Nigerian courtroom over 350 times, or face years of imprisonment on bogus charges, you would never stop playing music.

Your music would be called Afrobeat, a polyrhythmic big band blend of traditional Yoruba music with highlife, jazz and funk, and your name would be Fela Kuti. Your pulpit, your place of musical worship where all of this would go down would be known simply as the Africa Shrine.

Fela Kuti is dead. That is to say, his corporeal presence on earth has ended. Rightly so, perhaps, because the place of men with courage like this is not among mere mortals. But his music plays on and his musical bloodline continues through the music of his sons Femi and Seun, themselves critically acclaimed Afrobeat stars.

The Africa Shrine is gone. That is to say, the physical presence of Fela’s original political pulpit burned to the ground by soldiers (although the official Nigerian word is that a single ‘unknown soldier’ committed the arson) is gone. But it’s a venue whose political and musical legacy lives on. Under the guidance of Femi Kuti, The New Africa Shrine was opened in Lagos not long after Fela’s AIDS-related death in 1997. Afrobeat still pounds through the speakers of the New Africa Shrine, and like its predecessor it remains under the watchful eye of the government which has attempted, for dubious reasons, to close it. Though located in a different part of Lagos than the original, The New Africa Shrine, much like the old, remains the spiritual center of the defiant music that permeated Africa and beyond, and a rallying point for activists in Nigeria today.

Songs are not always political, but music is. The music of the New Africa Shrine may not always contain in them the vehement anti-government diatribes of Fela Kuti but the danger to Nigeria’s rulers, or the rulers of any country for that matter are as real as ever. Because when Christians, Muslims, and Jews, or Indigenous Africans and non-Africans share a dance floor, differences erode, and a danger far worse than guns presents itself to those in power.

“Dance your anger and your joys,
Dance the military guns to silence,
Dance oppression and injustice to death,
Dance my people,
For we have seen tomorrow
And there is an Ogoni star in the sky.”
– Ken Saro-Wiwa