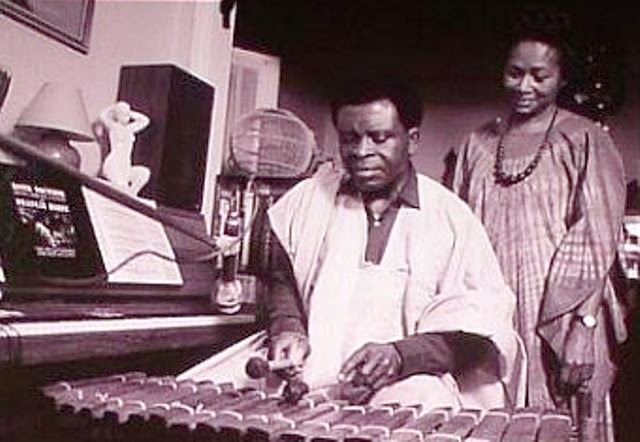 Francis Bebey was never one for rest. The Cameroonian native had already lived a full life as an accomplished academic attending the Sorbonne (for English) and NYU (for journalism and media studies), radio correspondent in Ghana and later for SORAFOM, award-winning novelist, and even sculptor by the time his first album of music came out in the late 1960s. A rare talent, Bebey was also relentless as an artist in general and, more specifically, as a musician. His father was a Protestant minister who appreciated the Western classical canon and exposed Francis to a wide range of music early; as such, Bebey was exposed to European and American instruments like the accordion and banjo as much as traditional instruments like the mouth bow his pals were playing.

Given this willingness to try out so many instruments and a natural sponge-like ability to soak up influences and new directions, it shouldn’t come as a surprise that Bebey plugged in and gave electronic keyboards, organs and drum machines a go in the late ’70s. African Electronic Music 1975-1982 is a compilation that gives some shine to a facet of the man’s vast discography that may otherwise be easy to pass by without context. Paris-based Born Bad’s efforts should be appreciated.

It’s worth noting, however, that this stuff isn’t as hard to find as one may initially be led to believe. A little hunting reveals that a third of these songs appear in some form on 1982’s Pygmy Love Song alone. Pygmy Love Song came in the final year of the presented span where Bebey was utilizing everything from synths to “sound on sound” recording techniques to different languages (English, French and the Bantu language Duala all feature here) in addition to the more traditional material of 1978’s Ballades Africaines or 1980’s live Afrikanischer Frühing.

That doesn’t necessarily mean Born Bad was lazy in its presentation, though. On the contrary, many of the songs on Pygmy Love Song appear earlier in his discography anyway — see, for instance, “Fleur Tropicale” from the 1976 LP of the same name or “Tiers Monde” from 1979’s Un Petit Ivoirien. You also get the entire second side of 1982’s New Track in the title-track, which opens this compilation, and the ponderous “Super Jungle.” Both songs strike me as equally fascinating for different reasons: “New Track” opens as an eight-minute socially minded groover that should be half as long but still delights in small doses, juxtaposing the first chorus (“I want some bananas, some water and dance on the new track”) with the first verse’s line (“It is my belief that there is something wrong with that system”) in a memorably simple melody. It’s Bebey’s electronic explorations in a nutshell.

“Super Jungle,” on the other hand, is an instrumental jam clocking in north of nine minutes that sounds less disposable on repeat listens, perhaps because of its lack of lyrics. Impressive enough back to back, Born Bad’s sequencing does Bebey a favor here by breaking up these and other long songs by sprinkling them in among the easier listens, stuff like the ultra-poppy “The Coffee Cola Song” or charmingly breezy “Fleur Tropicale.” I also keep returning to “Agatha,” where his deep, rich laugh never fails to delight. The guy sounds like he’s having a ball and it’s easily my favorite song here.

African Electronic Music 1975-1982 is a deceptively smart compilation sequenced at least as well as Bebey’s own albums which, for someone who’s discovering this side of him for the first time, helps show how far Francis was willing to stray from his roots. If the prospect of a limitlessly talented artist workshopping with a dingy drum machine and a few keyboards sounds tantalizing but you prefer high quality recordings and a 16-page booklet over Awesome Tapes From Africa rips, you’d be a fool to pass this up.


By the time Francis Bebey started making these home recordings he was already in his mid-30s. The son of a Protestant minister, he grew up in the Cameroon port town of Douala, surrounded by books and music. Seemingly able to play anything he got his hands on, from the guitar to the pygmy flute, Bebey moved to Paris in the mid-1950s to study music at the Sorbonne. It was there, frustrated by what he saw as colonial prejudice towards traditional African music and rhythms, that he came up with his great plan – to use Western technology to spread an appreciation of the African music and culture he so loved. A staunch proponent of Negritude, or Blackness, Bebey wrote poetry, novels and journalism, all of which aimed to promote the common values of Black civilisation; this remarkable record forms part of that aim. A piece like Tiers Monde (Third World) has a beautiful, circular acoustic guitar pattern overlaid with a joyously free-floating melody, while The Coffee Cola Song makes distinct – and wonderful – reference to emerging synthpop styles. Then there's the incredible Catching Up, which is a minor miracle, a heat-soaked, utterly psychedelic pop oddity and the achingly heavy, yodel-friendly Pygmy Love Song which sounds like the sort of record Damon Albarn would give his gold tooth to write. In the late 90s, after moving into film-making and having released 20 albums in 30 years, Bebey wrote his masterpiece, African Music: A People's Art, which remains the definitive work on the subject. He died, aged 71, in 2001.

Francis Bebey is not exactly a household name. However, he was one of the last true “Renaissance men”, something of a Franco-African Leonard Cohen, if you will. Born in Cameroon and educated at the Sorbonne and in the United States, Bebey was a successful novelist, journalist, sculptor and diplomatic consultant.

He also made music, releasing scores of albums from 1969 onward, mostly in a singularly eclectic, acoustic guitar-based mixture of African and Western styles. But, as its title suggests, African Electronic Music 1975-1982 highlights a lesser-known aspect of Bebey’s career in music. Inspired by his father’s electronic organ, Bebey experimented with its sounds and pre-programmed drum patterns, releasing several rare, electronics-based albums. African Electronic Music 1975-1982 collects 14 tracks from these releases. It is, not surprisingly given Bebey’s history, an eclectic mix nonetheless.

Crucially, the music here is not all electronic. Bebey used the electronic instruments to intermingle experimental techniques and new textures with traditional acoustic guitar, bass and African percussion. This amalgam plays out in exemplary fashion on opener “New Track”. Chiming, gamelan-like percussion gives way to a huge synthesizer riff that sounds like a hoarse, highly-processed wah-wah guitar. Electric bass holds down the bottom as Bebey chants, “I wanna banana and water / And dance on the new track”. In its heavily-syncopated strangeness it’s all very reminiscent of fellow Afrobeat pioneer Fela Kuti, though with a one-man-band taking place of Kuti’s Africa 70.

You might well figure you know exactly what you’re in for, then, but African Electronic Music 1975-1982 takes several twists and turns. “La Condition Masculine” heads up a suite of tracks that are made up of Bebey orating in French as a hissing drum machine and squiggly synths do their polyrhythmic thing in the background. Of these, “Divorce Pygmee” gets a nice, laid-back groove going, while “Fleur Tropicale” is based on acoustic guitar. “Tiers Monde” and the wonderfully-titled “Coffee Cola Song” are bright folk-pop that must have at some point passed through Cornershop’s turntable.

Then there are the real curiosities. “Pygmy Love Song” is a brooding, organ-led, English-language ballad that sounds like David Bowie or even Cohen himself. The only giveaway is the crude pan flute synth that punctures the track. “Catching Up” is Bebey on the edge, a hard-funk Afrobeat rhythm over which Bebey denounces an “impossible love” before moaning and hissing “Cheer up!” in a manner that is anything but encouraging. Fascinating.

The remaining tracks are mostly jams and freakouts, instrumental meanderings more than proper compositions. These are reminders that African Electronic Music 1975-1982 is, after all, a bit of a hodgepodge compilation, and that Bebey was indulging his creative spirit more than he was creating music for a mass audience. Still, the more structured tracks serve notice Bebey was an accomplished composer who had several big hits in his native land.

Electronic music technology developed swiftly over the time span covered by this compilation, but Bebey’s does not seem to have kept up. The rudimentary drum machines, organs, and synthesizers that sounded groundbreaking in 1975 had become outdated by 1982. What’s really impressive and timeless is the loose, independent spirit that permeates this music. 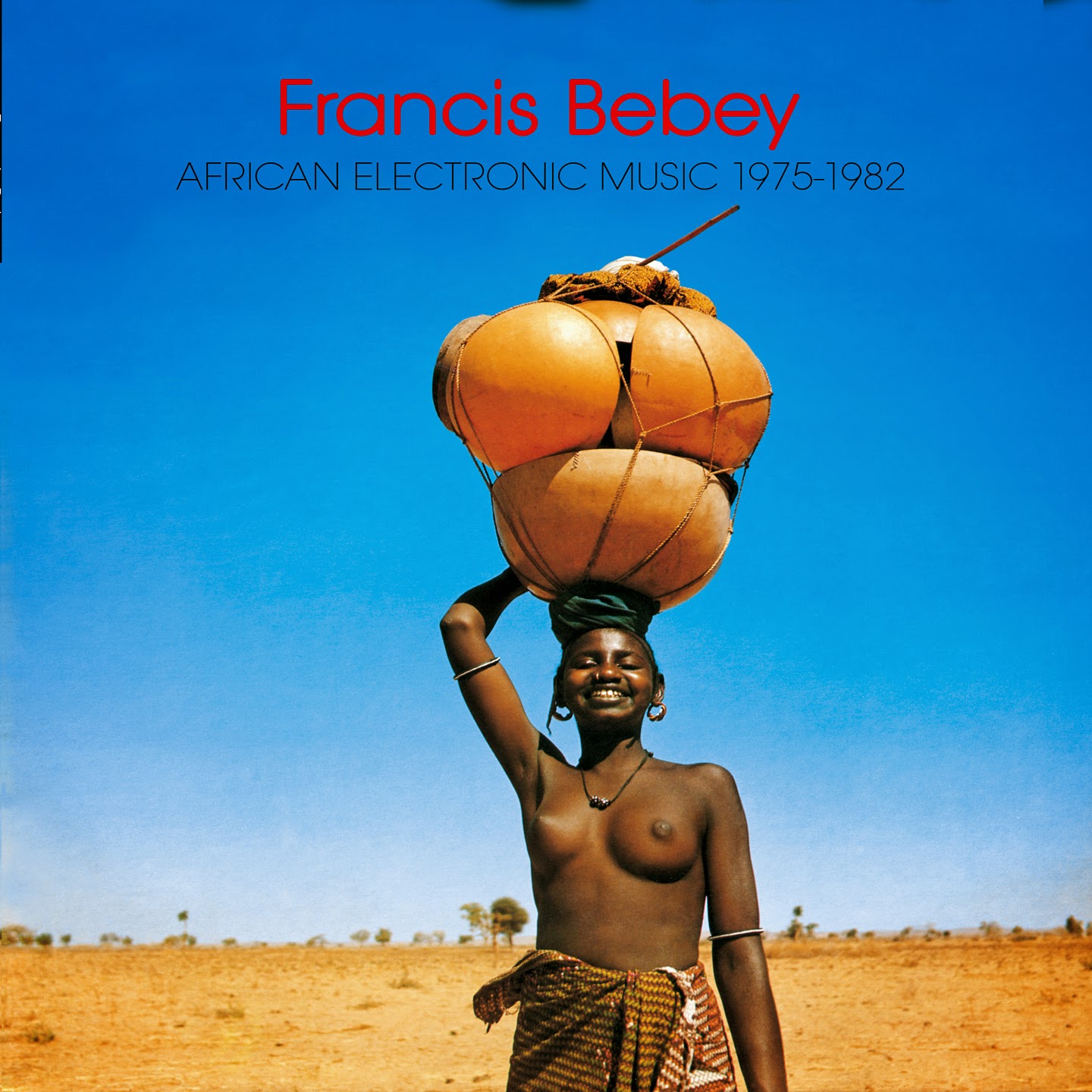 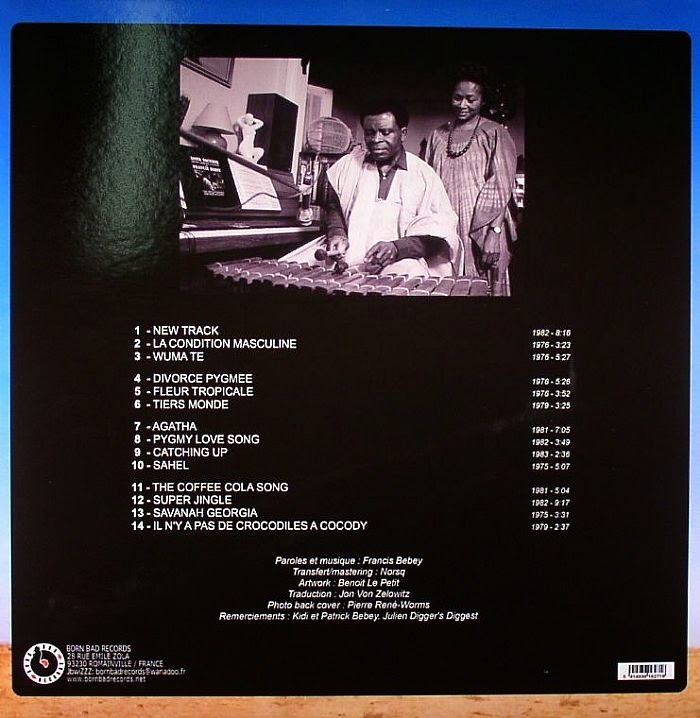