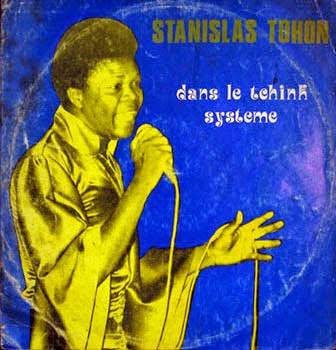 This album is a masterpiece. Totally afrobeat taken from traditional tchinkoume rhythm of Benin that Stanislas Tohon wonderfully modernized. Recorded in Côte d'Ivoire and Produced by famous Papa Disco, the orchestration, the arrangements and especially the density of the recording make this record unique. It is also very rare and hard to find.


Afro-Soul holy grail by the “Soul Brother From Benin“, featuring the famous “Vis à Vis” band from Ghana and recorded in Kumasi in 1979.

Stanislas Tohon aka Papy Grande was born in the “ Country of the kings ” (Benin), in Abomey 1955. He’s “Chevalier de la legion d’honneur” in Benin for his brilliant musical career.

The famous soul singer from Cotonou started his musical career at the age of 9 , played with the greatest such as Gnonnas Pedro and recorded almost 35 albums. Influenced by the traditional “Tchingoume “ music , he invented his own rhythm called “Tchink Système”, a mix of soul and Beninese traditional rhythm .

“Dans le Tchink Système” is a four track album recorded in Ghana on 24 analog tracks channel  with the incredible “Vis à Vis Band”, included a rare version of his first 7 inch “Africa “  that he recorded a year before with “Les Satelites” from Cotonou.

Sang in Fon, his native language from Benin, this album is a soulful call for peace and unity in Africa, a real definition of Afro Soul music !