Why Africa Is Yet To Have Another Fela 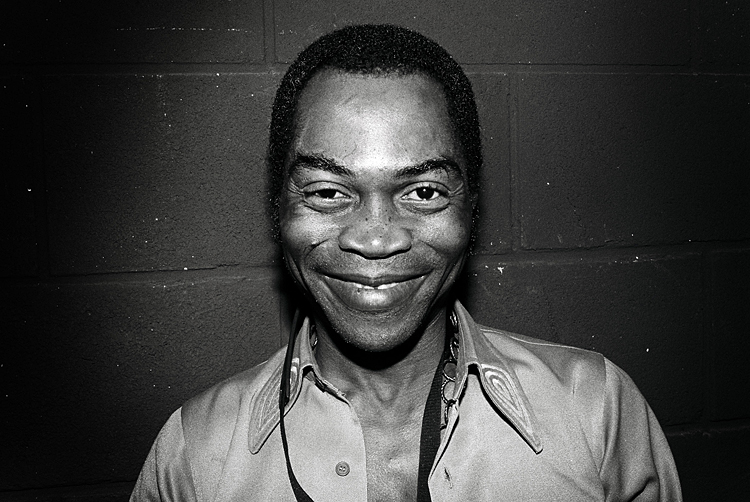 As Felabration- an annual celebration of the Fela Anikulapo Kuti’s life and music, held in Lagos Nigeria (from the 13th to the 19th of October) climaxes, Ventures Africa looks at why the continent’s contemporary music acts, despite their rising global stardom, are failing to replicate Fela’s originality, impact and influence.

VENTURES AFRICA – On the 15th of October 76 years ago Fela was born in the ancient city of Abeokuta, Western Nigeria. He would go on to, like the Olumo Rock for which the city is known, become not just legendary but also a heritage for his people and peoples all over the world.
17 years after his death, Fela, renowned for his creation of Afro-beat, remains the heartbeat of African music and continues to with his music, made several decades ago, transcend cultures, countries, continents and generations.

The flipside however is that since Fela, African music has struggled to replicate such a revered, controversial and dominant brand in the global music scene the way the Afro-beat legend did. Contemporary African musicians have not been able to exert the sort of influence the maestro had on the African society.

Born, Olufela Olusegun Oludotun Ransome Kuti, Fela’s sojourn into music, like his journey through life, was rebellious. Sent to London to study medicine by his School Principal Father, who was also a Protestant Minister, Fela jumped on music instead; it was only the beginning of his disobedience to authority. His life, since the start of his music career, became dominated by clashes with government authorities- from the US (by being a member of the Black Panther Party), Ghana (where he was banned from entering) to the several Nigerian governments that were recipients of his vitriolic attacks for their poor governance.

However, Fela’s musical prowess endeared him to the hearts of millions of people, in his homeland Nigeria and across the world.

His style of music was original, embellished by a complex blend of traditional African music, western jazz and funk, and the fusion of percussion and vocal styles. This meant that the appreciation of his music was as wide as it was diverse. Just as his performances in his Afrika Shrine in Nigeria regularly drew large audiences, local and foreign- Western music legends James Brown (One of Fela’s main musical inspirations), Stevie Wonder and Gilberto Gil visited, his albums gained massive receptions – Music Critique website Pitchfork Media ranked it number 90 on their list of the 100 best albums of the 1970s – as his shows abroad were also thronged to, so much so that one in Ghana caused a riot.

Zombie, released in 1977 was the archetype of Fela’s musical success. The album was not only a massive hit in Nigeria, but also across Africa and the world, and forty years on remains as popular as it was the first time it came out of the studio. That song and album also typified Fela’s activism as well as the followership he commanded. Just as Zombie raved at the Festival for Arts and Culture (FESTAC) held in Lagos in early 1977, it would also draw massive crowd in in a performance in Accra, the latter however went sour with the Ghana show turning into a riot that led to Fela and his entourage been banned from entering the West African country.

Sam Samuelson, a reviewer in popular music site allmusic.com, said of Zombie “it ignited the nation to follow Fela‘s lead and antagonize the military zombies that had the population by the throat… Since the groove was so absolutely contagious, it took the nation by storm: People in the street would put on a blank stare and walk with hands affront proclaiming “Zombie!” whenever they would see soldiers.

However, Fela’s activism would come at a cost. Zombie, seen as an attack on the Nigerian government was responded to with brutal force by the then Obasanjo military regime. He was severely beaten by soldiers and police who also threw his elderly mother thrown from a window- causing fatal injuries that consequently led to her death, burnt down his Kalakuta Republic, and destroyed his studio, instruments, and master tapes. Even though unsuccessful in stopping either his turn out of great music or his criticisms against Nigerian governments, state-sponsored harassments would carry on throughout Fela’s life, a jail sentence in 1984 that led Amnesty International to designate him a prisoner of conscience was the climax of his detentions and over 200 arrests.
Fela’s kalakuta lifestyle- meaning ‘rascal’ in Swahili- would also hunt him. It is widely believed that his promiscuousness and polygyny was a factor in the AIDS he contracted that led to the kaposis sacoma that killed him. But even his demise did not end his brand, many contend that he became even more popular in death. His funeral, in August 1997, was reportedly attended by more than a million people who began with a procession through the centre of Nigeria’s commercial city of Lagos.

If the thronging to his funeral was just a one day event, the yearly Felabration- conceived by Fela’s eldest child Yeni in 1998, symbolizes the enduring impact of his life and art. The festival is a mega week-long musical event in Nigeria attracting thousands of visitors from all over the world yearly to the New Afrika Shrine an- official tourist destination of Lagos State. 2008 witnessed the gathering of over 50 international musicians from the United States, Great Britain, France and Senegal to perform at Felabration, which always runs through a week of October that includes the 15th (his birthday).
And If Felabration typified the enduring appreciation of Fela’s music at home, the Broadway Musical FELA! by Steve Hendel, award winning choreographer Bill T. Jones, writer Jim Lewis, with producer backing of American rap icon Jay Z and artist extraordinaire Will Smith, depicted Fela’s enduring admiration even in faraway lands.

In January of this year Finding Fela, a documentary by Academy Award-winning director Alex Gibney that tells the story of Fela’s life, music, social and political importance, was premiered to global appreciation.

Fela’s lasting legacy, however, is the overt influence his musical style continues to have in contemporary African and western music. His Afrobeat, aside becoming one of the most recognizable music genres in the world, in which many –including his sons Femi and Yemi have built successful musical careers, is also the foundation to Africa’s currently thriving Afrobeats (note the ‘s’) music style that is fast making global acts of African musicians.

With Fela’s legend status confirmed, his brand proven immortal, the new question now asked is why contemporary African arts have not been able to command a similar impact on Music and the society at large.

For the incomparability of his music to those of contemporary musicians, Fela’s appreciation of music – African and western – is highlighted. Describing Fela as Africa’s Handel, Peter Culshaw – who interviewed the music great – writes in BBC; “Kuti studied classical music at Trinity College in London in the early ‘60s, where he also had a jazz and highlife band called Koola Lobitos.
“When I asked him, cub reporter style, who his favourite musician was, he said: ‘Handel. Western music is Bach, Handel and Schubert. It’s good music, cleverly done. As a musician, I can see that. Classical music gives musicians a kick. But African music gives everyone a kick.’ In the ‘80s, he started calling his music African classical music.”

Such attention to what many see as pure music is often missing among contemporary African arts as is the creativity with which Fela fused several genres and instruments of music. It takes a very cultured musician, Fela’s protégé, Dede Mabiaku notes to popular Nigerian blogger Linda Ikeji. “Fela scored his music and his lyrics came along. Fela groomed his band with the sound he had scored. Ethically, he cultured a sound built within a band. After that, he now performed this song over a period of time before going to the studio to record. See the sequence.”

According to Dede, today’s artists employ the exact opposite of such a tried and tested technique. “Now let us come to the present day artiste, what are they doing? They just go into the studio, make few sounds together, make hooks, roll it round and round within a certain amount of minutes and voice on it later,” he noted.

Fela was also fiercely original in his music and uncompromising in his standard, something most African arts today are not. He is reputed for refusing to do the typical three minutes-plus songs, a stance that hindered him from scoring the big monies of western music labels. Culshaw adds “Kuti received various other offers from American record labels in the ‘80s, but at the time the problem was he was producing 60-minute-long pieces”. In the Documentary Finding Fela, he is quoted saying that you would not expect composers like Mozart or Beethoven to write three-minute numbers, so why should he?

But among contemporary arts, sacrificing quality for maximum commercial gain is the mantra, titled “going commercial” in Nigerian music parlance. “Commercial music is now recurrent, popular Nigerian music critique writes in music site tooxclusive.com, “it has a solid footing in the music industry. Observations have shown that Nigerians are happy people; they do not want to be held down with their problems or the fact that they have problems, hence ‘dance away their sorrows’, an opportunity commercial music provides abundantly”. He goes on to say that commercial artistes “push more records” than conscious ones with the former making more sales.

But Fela saw music as a vehicle of expression of his thoughts- political and philosophic, as well as a medium to advocate for causes that he believed in. This sets him aside and perhaps did not make him money as much, but a legend as such.

Fela’s societal impact is also virtually unachievable by contemporary African arts. In 2011 Australian tabloid Herald Sun said of Fela, “Imagine Che Guevara and Bob Marley rolled into one person and you get a sense of Nigerian musician and activist Fela Kuti.” Creating a state within a state as he did with his Kalakuta republic, and being described as a cult figure in the UK in the mid 80s, such was the command of Fela’s personality. Albeit it was also destructive –his marrying of 27 wives and living in denial after contracting AIDS symbolized how much so.

Nonetheless, contemporary African arts have struggled to match his conviction in social justice, outspokenness for human rights and black empowerment, against bad leadership and corruption – that still plagues Africa – as well as his indefatigable dare to be different.
Thus, Fela with these qualities, nourished of course by an immense artistic talent, continues to remain irreplaceable in Africa’s music space.

If Finding Fela- the movie documentary had been about finding a contemporary African Music commanding the same influence in African music and the society at large and standing out at the same time, it would have no doubt been a futile project. Perhaps that is why he is Fela- the kind of personality that a century only has the privilege of having once.