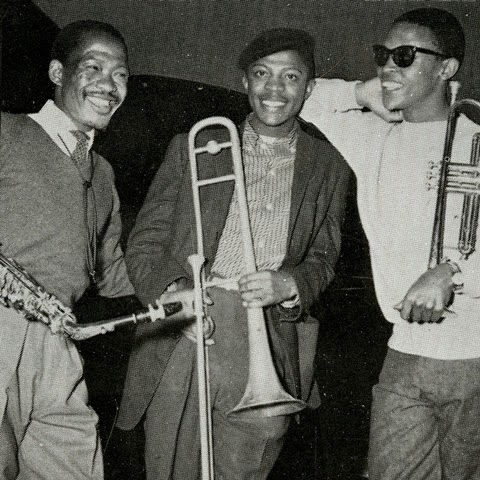 American pianist, John Mehegan toured South Africa in 1959 and recorded this seminal album (vol. 1) and a second (vol. 2) with most of the horn section of the Jazz Epistles. The line-up included John Mehegan and Chris Joseph on piano, Kippie Moeketsi on alto, Hugh Masekela on trumpet, Jonas Gwangwa on trombone, Claude Shange on bass, Ray Shange on pennywhistle and Gene Latimore on drums. There is a single track featuring Samson Slingo on mbira with a spoken introduction probably by Mehegan, who also pens the liner notes. According to Jonas Gwangwa, this "was the first LP made by black people in South Africa." (Ansell, p. 98)

A more commonly available compilation CD, Jazz in Africa Vol.1, issued by Camden (CDN 1004), features a selection of tracks from the Mehegan LPs and the Jazz Epistles' Verse 1 LP however this compilation is quite poorly researched with the liner notes giving the impression that all the tracks are by the Jazz Epistles (Dollar Brand etc...) and makes no mention of John Mehegan.

Track I — Venda introduction (traditional) 1.48.
Samson Singo is a busker (a strolling street performer) who wandered into the studios during the session. The mbira piano is about eight inches long and four inches wide. It consists of a number of steel spikes of varying lengths attached to a wooden resonator; the spikes are plucked with the thumb nails.

Track 2 — "Delilah" (Victor Young) 6.06.
Splicing "Delilah" into the Venda introduction we thought might point up the light-years that exist between the "beginning" and the "present". Chris Joseph is on piano.

Track 3 — "Round Midnight" (Monk, Williams, Hanighen) 4.16.
This track features pianist Chris Joseph who was the only musician in the Union who knew the tune. In criticizing the musicians in Durban, I mentioned this fact — the next day, his phone rang three times.

Track 4 — "Lover Come Back To Me" (Romberg-Hammerstein) 3.38.
Kippie insisted this be "my" tune, but we finally compromised on adding some I6's by Kippie, Hugh and Jonas.

Track 5 — "Body and Soul" (Green, Sour, Heyman) 4.08.
This features Kippie, who really "plays" the tune rather than treating it as a virtuoso tour de force.

Track I — "Old Devil Moon" (Lane, Harburg) 5.30.
This tune came up at a jam session and Kippie, who was only vaguely familiar with it, insisted on working it over until hejcould call it his own. The G major chord in the bridge absolutely gassed him each time we went around. He considered it a "moment of truth" in the tune. He is right, of course, for who ever heard of anyone going from an F minor chord to G major? Surely a moment of truth.

Track 2— "Yesterdays" (Kern, Harbach) 5.25.
We seemed to run into meter trouble on this tune until we dis¬covered that Jonas was deliberately juxtaposing a "quote" of one part of the melody over the chords of another part. Of the three (Hugh, Kippie, Jonas) Jonas was the quickest "study" with a new tune and seemed to have the best facility for playing in the twelve keys.

Track 3 — "X-Ray's Friend" (Freddie Gambrell) 3.32
This track features Chris Joseph again. For all of his rather amazing familiarity with present-day idioms of jazz piano, Chris manages a lyricism that is quite his own.

Track 4— "Cosmic Ray" (Vernacular) 3.40.
This is Ray Shange playing the pennywhistle, or for that matter, two pennywhistles simultaneously as he does on this track. Playing the pennywhistle is only one aspect of this deeply sensitive man who draws magnificently and also plays credible jazz drums. The "pennywhistle," incidently, costs about five shillings, or about sixty cents in United States currency.

The idea of geographical jazz has persisted long after the actual fact has ceased to exist. There probably has not been any authentic regional jazz since the Kansas City school of the late Twenties and early Thirties, yet the myth of local indigenous styles has flourished, reaching it's most preposterous heights with the "East Coast - West Coast" dichotomy of the Fifties,

Beyond the limits of continental United States, we have been told of French jazz, German jazz, Scandinavian jazz, etc. until it seemed that the kaleidoscope of world jazz was as equally stunning in it's ramifications as world painting or world literature. This, obviously, is not true for the rather simple reason that practical materials of jazz do not allow for the essential separation of the attitude (what to express) from the device (how to express it). The inseparable connection of these two factors in jazz accounts for the vast imitative nature of world jazz. Unlike the prophet, the jazzman is not without honour", only "in his own country, and in his own house". Devices, or technics, can and should be cosmopolitan, but attitude or feeling, must be local and specific in order to be valid.

For instance, post - Freudian literature has flourished in all of the major countries of the world, yet a specific national stamp completely distinguishes one from the other: Joyce in Ireland, Kafka in Germany, Virginia Woolf in England, Sartre in France, Faulkner in America. The technical devices employed are common to all, but the feelings revealed are deeply grained in each national experience. The short happy life of West Coast jazz began (Miles Davis Ninetette) and ended (abandoned Columbia album) on the East Coast and it's main progenitor, Gerry Mulligan, was born in Philadelphia. Since 1952, there has been talk of a Detroit school (Byrd, Burrell, Flanigan) and a later -day Chicago school (Bright, Jamal), but there is little in either case to justify the term "school".

Jazz in Africa is basically similar to jazz in the rest of the world (same idioms, same devices, same repertoire). It just happens to be much better than jazz in the rest of the world, excepting America. The reasons for the superiority of African jazz lay in the presence of one mature giant, altoist Kippie Moeketsi, age 34, whom I would rate with Getz, Peterson and Far low as concerns sheer melodic invention; two young disciples of Kippie's, trumpeter Hugh Masekela, age 22, and trombonist Jonas Gwangwa, age 23; and finally pianist Chris Joseph, age 21. Kippie, Hugh and Jonas are African and hail from Johannesburg; Chris is Indian and lives in Durban.

The recent history of South African jazz is intimately bound up with the names of Kippie Moeketsi and Rev. Trevor Huddleston, an Anglican missionary belonging to The Community of The Resurrection. Father Huddleston was born in England and lived in South Africa from 1944 until 1956. Apart from his work with the spiritual and social lives of the African people, Father Huddleston sought for some means of tapping the musical talent of his flock. From this evolved the Huddleston Jazz Band, of which Hugh and Jonas were charter members. Under the leadership of Father Huddleston and bassist Bob Hill (a Scotsman, who can burr with the best of them), a jazz clinic was established and with it an organized'effort to obtain recordings and instruments, as well as to hold classes in basic harmony.

Through the efforts of Hugh and Jonas, Kippie, who had been inactive for several years, became involved and a first-rate group, built along the lines of the Parker - Gillespie ensemble, slowly developed. Instruments were obtained, including a trumpet from Louis Armstrong which Hugh plays on these recordings, and the group gigged around Johannesburg as an organized unit. Finally in 1958, Hugh, Kippie and Jonas joined the pit band of "King Kong", a folk opera similar in structure to "Porgy and Bess", composed by an African, Todd Matshikiza, and produced by Europeans. Since then, things have not been very active jazz-wise and although this magnificent "front line" continues to play dance gigs, more and more, jazz has given way to the African counterpart of rhythm and blues. 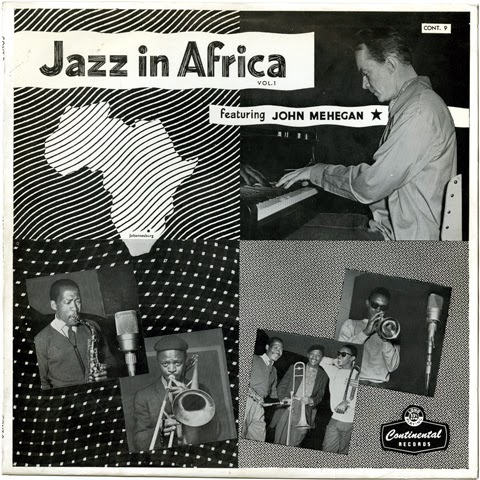 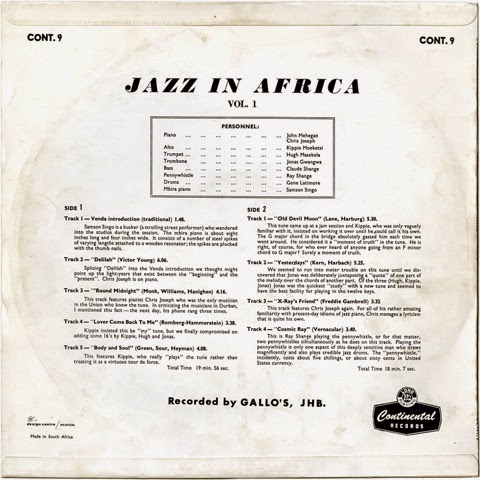