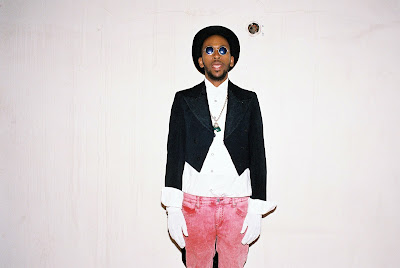 Spoek Mathambo is one the year's brightest new hopes. From Johannesburg but based in Sweden, Spoek (real name Nthato Mokgata) plays with genres like few others. He makes radical, sometimes disjointed music, some of which - like his new single “Let Them Talk” from his recently released album Father Creeper - you can actually dance to.

Spoek got a lot of attention last year with his cover of Joy Division’s “She’s Lost Control", but I began by asking him about Die Antwoord, the hilarious and brilliant white rap group who created a lot of waves in 2010. He and his band are currently on tour in the U.K.

SPOEK MATHAMBO: Die Antwoord were a joke, If you think Ali G or Borat was a joke. It’s a role and they are playing out the role. I’ve known them for years. There’s a back catalogue that is very different. I don’t think I’m this year’s South African hype in that way. I’ve put out an album on Sub Pop. It’s the first album I’ve taken a lot of care over.

The trouble is with writing about you is that us music journalists like to talk in terms of genre. Are you, shall we say, post-genre?

You must have seen the change come. The amount of information. The way people have allegiance that younger people have is different from the days when you were a teddy boy, a punk, a hip-hop head, a jungle raver, or whatever. I pledge no allegiance to all that. And you don’t listen to one album a month, It’s more like 50 albums a day. So my music is going to reflect that. My generation grew up on the internet, 20 windows open at once.

The first interview I got published was Fela Kuti, there was that mix in him. He loved classical music like Handel, African music, James Brown. Is it really so different?

I’m doing a couple of remixes of Seun Kuti, his son. Fela was torn between European bourgeois influences, in a way he was brought up with that, his dad wanted him to become a doctor or a lawyer and he studied classical music and jazz and then he fought to become an African revolutionary, he became more African as he went along. There was a Red Hot And Riot CD of Fela material in aid of AIDS, there’s a new one happening. I’m doing two new tracks. As a prolific musician to have this whole catalogue, a lot of the themes stand so strong even now, think of what’s been happening in Egypt – his songs are still relevant.

A lot of people were intrigued by your Joy Division cover. There’s also some metal and punk influences on the new album, isn’t there?

I grew up on hip-hop, I’m 27 now when I finished college I got into metal more.  Stuff like Sabbath, immediately impactful, beautiful and big. When I moved to Sweden I got even more into it as well. I was in a mall in Sweden yesterday and they played “Anarchy in the UK.” The Joy Division and Suicide “Night Rider” tracks came out of a covers project.

It’s not as bad as “Hipster Rap” or something. It’s a wide label, George Clinton is an Afro-Futurist, isn’t he? I prefer “Township Tech.” There’s a lot of new types of South African sounds, different regions have their own sound. It’s so vibrant they don’t care about the rest of the world. A lot of stuff isn’t on the internet which is redefining the flavour of South Africa right now.

What did you make of Malcolm Mclaren’s Duck Rock? Or Paul Simon’s Graceland, which introduced many Europeans to South African sounds?

I used to think it was a kind of robbery growing up. But now I think as an artist it was clever borrowing. Even though there is some doubt all the artists got the right credit and payment. Now I’m less resentful and bitter, and also stuff like that make me think of my responsibility to do it, rather than foreigners. Often we don’t appreciate our own culture. But I do think McLaren, with punk especially, and his ideas of appropriation have been at the bedrock of a modern culture. Undeniably, hugely influential  for my generation.