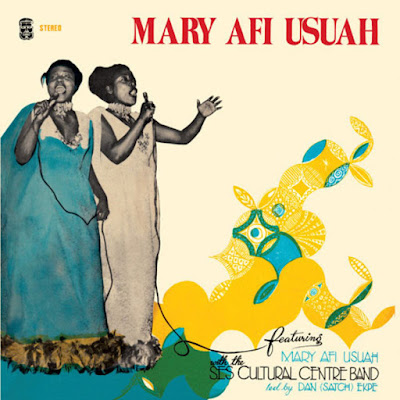 Voodoo Funk present a heady trip into Nigerian funk, blowing the cobwebs off a genuine rarity among a 21st century resurgence for 70s African albums. Spearheaded of course by Fela Kuti's posthumous uprising, afrobeat and West African funk is becoming increasingly sought after; appreciation for the period has even swelled to a scale that warrants its own Sugarman or rarity-within-rarity, manifested in the elusive figure of William Onyeabor. There comes a point when you question the selection processes of these record labels, as easy as it seems to dip into this avalanche of dusty, tropical heat-warped LPs and pluck out something brilliant.

But Mary Afi Usuah is definitely the product of an arduous and determined trawl. A rare female voice on the circuit, Afi Usuah's career focused more on promoting the arts in post-civil war Nigeria than a personal output. Having been musically trained in London, Rome and Naples, her thirteen year tour of Europe saw her support acts as diverse as Led Zeppelin, Duke Ellington and Deep Purple while she experimented in styles ranging from jazz and rock to opera. She then recorded three solo albums - none of them well known beyond a generation of Nigerians - before taking a post at Lagos' Ministry of Information and Culture. Afi Usuah died in February 2013, tragically short of this re-release of her 1975 debut album, Ekpenyong Abasi.

A keen guitarist from a young age, Afi Usuah's advances as a female composer/songwriter made her career unusual at the time. A similar exception came with the criminally underrated Lijadu Sisters, a twin duet who created dreamy soundscapes by singing in perfect synchronisation; the same effect is made on Ekpenyong Abasi, with Afi Usuah's vocals reverbing into infinity against an echo of backing singers. She possesses the sultriness of the great African American jazz singers, complemented on most tracks by the kind of slow, dark funk that Sly & The Family Stone did best. All members of the unimaginatively named 'Cultural Centre Band' were unaccredited, but trumpeter and bandleader Dan 'Satch' Asuquo has since been acknowledged as the main creative force.

Dan Satch was known in Nigeria for integrating traditional idioms into a popular music context, resulting in several experimental singles. Ekpenyong Abasi was an album-length extension of those experiments, with Afi Usuah sharing her desire to promote indigenous Nigerian art in all its forms. Stop-start rhythms and wild, untamed drum whacks dominate on 'Mma Amo Mbo', a track which speeds to a heart-attack inducing pace; in terms of Afi Usuah and Dan Satch's traditional awakening, this is probably the standout moment.
Ekpenyong Abasi possesses a raw power that must have made it leap out of the aforementioned stack of heat warped LP's presented to the music archaeologists. This is hardly the high energy sweaty dance party in which afrobeat thrived, but rather a soporific ritual that transports the listener away from Lagos and into Afi Usuah's home territory of Cross River State. "Art isn't something [Nigerians] view as important", Afi Usuah said of her philosophy, "but it's our arts that have exported the most positive image of Nigeria. It's the arts that show us who we really are".