Highlife, Afrofusion and the re-emergence of Bob Pinodo Music 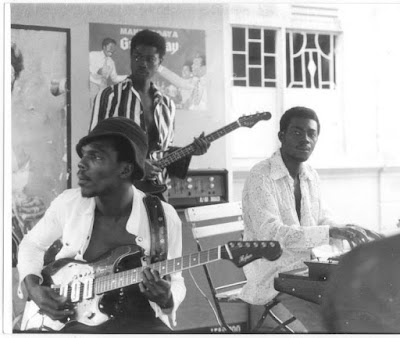 Highlife is a musical genre that originated from West Africa; Ghana, Sierra Leone and Nigeria. Its roots can be traced back to the 1880s, to music of marching bands, sailors and palm wine drinking groups. Thought to be of reference to parties by the European upper-class, the term ‘highlife’, was coined in the 1920s with dance orchestras playing at parties of the elite, while poor rural musicians played guitar-oriented versions at palm wine drinking places for a calabash of drink or a token of gift. The guitar-based style of music rose to prominence in the 1950s and became associated with the pre-independence sound as it incorporated elements of swing, jazz and Cuban rhythms with the emerging guitar styles of West Africa. Describing this fusion of sounds, Professor John Collins – a musicologist at the University of Ghana – wrote: “By combining…so-called high-class music with local street tunes, a totally different type of music was born – the highlife we know today.” Highlife music then became the dialogue that led to the birth of an independent nation Ghana, in 1957. A number of guitar highlife outfits were formed, most popular being ET Mensah and “The Tempos” band, Nana Ampadu and “The African Brothers” band, Agya Koo Nimo, A.B. Crentsil, and other highlife bands as Ramblers International and the Professional Uhuru Dance Band.

The rise of Congolese music in the 1960s coupled with the overthrow of Ghana’s Premier Osagyefo Dr. Kwame Nkrumah in 1966, resulted in a decline in the popularity of highlife music. The upheaval saw many Ghanaian musicians that had flourished in the 60s emigrating. Most moved to Nigeria, the United States, United Kingdom, and Germany among other countries. By the start of the 1970s, highlife music had been over taken by pop music and electric guitar bands. Music produced by African Americans and Europeans began to exert a heightened influence over the Ghanaian music, giving it the rather global appeal.  The heightened interest in ‘World’ music in the United Kingdom and the United States saw the focus of Ghanaian music spread away from Africa. Perhaps this was the reason why some Ghanaian musicians and records made it bigger overseas than home; one such being the legendary Bob Pinodo.

Bob Pinodo is one of Ghana’s foremost musical showmen, traveling around the country with his own variety show which featured dance, music, and comedy. He was awarded the Arts Council Award as the country’s most talented musician in 1969. Bob recorded his first LP in Germany in 1977. Better known in his days as the “show master of Africa”, Pinodo rose to the pinnacle of his career with hit songs like “Disco Dance”, “Yesu ne m’agyenkwa”, “Love is Love”, “Girl with the guitar shape”, ”come back love”, “Africa”, “Darling” and “peep to see”, all on his “show master of Africa” album (attached). The Album released by Essiebons Ltd. in 1978, had air play on the BBC, winning best album, best composition, best production, best recording and ultimately the album of the Millennium from the Entertainment Critics and Reviewers Association of Ghana (ECRAG) and the Ghana Broadcasting Corporation (GBC) respectively.

Having traveled the world over with his music, Bob believes that Europe, the United States of America, United Kingdom and the rest of the world have had a good share of his talent, and it was time to bring the rest home. For this reason Bob Pinodo came back home to Simpa and took to teaching at the University of Education, Winneba. Known in private life as Kwaku Idan, Bob has been teaching
•    How to make hits,
•    music production,
•    arrangements,
•    Dance Band Directing, and
•    Recording at the University, for ten (10) years.

The legendary musician is certain that having taught the art for a while, it was time to demonstrate what he has taught. To this end, Bob Pinodo has found the need to do a Ghana Regional tour. Prior to the tour, Bob will host a Music Education Magazine series on National Television, GTV. The series will be aimed at training Ghanaian Musicians in the act of making their art attractive and marketable to global music markets. In these series, Bob will reveal the secrets to making international hits, and help many upcoming musicians improve if not perfect their act. The show master of Africa, who is also a choreographer, will then hit the Road to do a national tour with his “sonobete” dance.

Away from the fact that the best methodology in teaching is demonstration, Bob also believes that Ghana’s most precious natural resources are not buried in our soil, but the hearts of our people. Bob Pinodo intends to demonstrate this in the closing years of his career. Having traveled the world over with music, Bob has had extensive first-hand information on how music arts and entertainment has and continue to transform economies of nations. He cites the British Invasion led then by “The Beatles”, in the 1960s, as a catalyst of transformation to the British Economy. The re-emergence of Bob Pinodo Music is so forth a “wake up call” on government and all stakeholders to demonstrate a commitment to transform the Ghanaian Economy, through Music and the creative Arts.