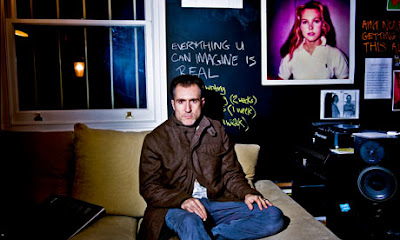 Richard Russell is the boss of XL Recordings (home of Radiohead, Vampire Weekend, Jack White etc.) and the producer of recent classics such as the late Gil Scott-Heron’s I’m New Here and Bobby Womack’s The Bravest Man in the Universe (together with Damon Albarn). In 2010 Richard travelled to Harar, Ethiopia, as part of the Africa Express along with fellow producer Rodaidh McDonald. Their Ethiopian visit resulted in the release of the four track Ethiopian EP last year on Angular Records under the name Fresh Touch (named after a Harari restaurant).

The lead track Harar Rythm is a co-production with Nick Zinner of Yeah Yeah Yeahs and is accompanied by a stunning video of archival footage of Ethiopian landscapes, Harari musicians as well as Emperor Haile Selassie (who was born in a village close to Harar). Harar Rythm and the other tracks on the EP is a thrilling mix of traditional Ethiopian chanting, clapping, various other sounds recorded in buses and hotel rooms across Ethiopia together with electronic loops and samples. The result is fairly unique and throroughly hypnotic.

We recently got the chance to ask Richard about the wisdom he gained in Ethiopia. Find out how the Ethiopian visit influenced his recent productions and tune into Harar Rhytm below:

Although the Ethiopian musical tradition is incredible rich and nuanced, many foreigners’ knowledge of Ethiopian music is still limited to Mulatu Astatke’s ethio jazz. Was it a deliberate choice from your side that you wanted to do something very far from ethio jazz?

There wasn’t any plan. We didn’t even know we were making an EP. We were just inspired to create by our surroundings. Ethiopia is an extraordinarily inspiring place. It has an energy completely unlike anywhere else in the world.

How was it working in Ethiopia compared to your recent experience recording in DR Congo?

Everything about our trip to Ethiopia was different from our trip to DRC. Both were life-changing, and from a musical perspective you couldn’t ask for more broadening experiences. We went to Ethiopia simply to learn, to experience places. We ended up making an EP. It was very laid back. Whereas we went to DRC specifically to make an album for Warp, in a short space of time, so there was a bit more pressure. It felt like Kinshasa and Addis are like different planets… but I guess we see the world, as we are, rather than it actually is… so I’m sure our state of mind would have a big impact on what we thought of the place. Equally you only scratch the surface of any place on a visit like this, it would be amazing to spend more time in a place like Addis, in this lifetime or another…

Are there any particular techniques, experiences or other wisdom gained in Ethiopia that you have been able to use in your work afterwards?

I’ve probably carried the feeling of my visit to Ethiopia into everything I’ve done since. My rhythmic contributions to the album I produced for Bobby Womack with Damon Albarn were definitely influenced by things I learned in Ethiopia… not neccesarily in an overt way, but you can’t not be influenced by visiting somewhere as special as Ethiopia. I’d encourage any musician but especially anyone who is interested in rhythms to visit Ethiopia, because you end up learning so much, just by being there.

I picked up on a gentle spirit in Ethiopia, a sort of female spirit… strong, but gentle. Thats a great spirit for creativity… you have to be rugged to be a musician or producer, but you also have to be very sensitive, very open. We listened to some singers in a church in Harar who had many of us in tears, just the sheer beauty and power of the sounds they were making. I felt privileged to have witnessed that, and I’m grateful to have had the experience. And hopefully through trips like these we get to encourage the dialogue between African and Western musicians, its a gradual thing…