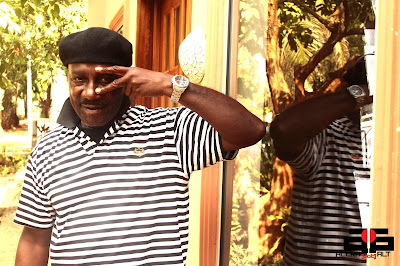 
Gyedu-Blay Ambolley was born in the port city of Sekondi-Takoradi. The multi-talented and internationally celebrated musician has decades or experience under his belt. He is a versatile and irrepressible singer/songwriter/producer, who is credited by some to be the originator of afro rap. He exploded on the music scene with a jazzy highlife sounds called Simigwa-Do.

His interest in music dates back to age eight, when he began playing with his father's flute until he was able to teach himself how to play. His formal musical training came at the age of fourteen. The young music enthusiast continued to learn the rudiments of music from the late Sammy Lartey and Ebo Taylor.

Ambolley spent a great part of his day listening to records of musicians living in the United States. He contributes his free style of singing to such mentors as James Brown, Ray Charles, and Sam Cook. During the sixties, the young aspiring musician was excitingly impressed with the music her heard on the popular radio show, "Voice of America Jazz Hour.

His name has become synonymous with Simigwa music and dance since his first hit single was released in 1973. Since that hit, he has lead many bands including his own in 1979-80. His talent was not limited to Ghana; he was invited to London where he performed to â€˜standing room onlyâ€™ crowds. Having experienced success in his own country, as well as London, it was time for the ambitious musician to test his musical abilities elsewhere. In 1988, Ambolley left Ghana for New York.

Ambolley has toured throughout West Africa, Europe, Canada, and the United States. He has performed on the same stage with some of the worlds most celebrated artists, such as Miriam Makeba, the late Fela Anikulapo-Kuti, George Howard, Angela Bofill, Norman Connors, Manu DeBango, Lakeside, Chikuzan Takahashi, Ricardo Estrada of Cuba, Mayuto Correa of Brazil. He also toured Ghana with Oscar Brashear and Michael Session. Because of his originality, his performances have left audiences raving and shouting for more, as was the case at the world famous Apollo Theater in Harlem, New York. He has played the House of Blues in Hollywood, is a frequent performer at the Jazz Bakery in California and has played to "standing room only" crowds in London, England.
Ambolley has over 17 albums to his credit and has received numerous musical awards. In October of 2003 he was prestigiously recognized for his commitment to his musical craft with a "Lifetime Achievement Award" by Jazz at Drew from Charles R. Drew University of Medicine and Science, Los Angeles. Additionally he received a Congressional, Gubernatorial Certificate of Special Recognition by Congresswoman Juanita Millinder McDonald. Also L.A.Weekly nominated Ambolley for Best World Beat Recombinant Artists in 2003.

In 2007, he released a 14 track album, The Next Generation, after a 17 year hiatus. It featured remixes of his old hits as well as some new songs. He has been crowned Simigwahene by the Omanhene of Esekado Traditional Area, Nana Kwabena Nketia.


This record doesn't need much of an introduction. Gyedu-Blay Ambolley's debut record is one of the most iconic albums of the entire Ghanaian discography and also boasts one of the coolest cover designs I have ever seen. If you want to get into Ghana Funk, there's simply no way around this record. Well, this one and of course the mighty This Is Marijata.

Simigwa was a relative big seller back in 1975 but you would be surprised how hard it is to track down a playable copy in today's Ghana. People played the daylights out of this album. Put it on and you'll understand immediately. This record is an instant party: Just add a few friends and some libations and good times will ensue. It's a law of nature. At the end of side 2 you'll just flip it over without even thinking about it. If you don't want to have to worry about wearing out your only copy, be wise and order two. This baby is limited to 1.500 copies so be quick. Get them from the source: LP/CD. The CD comes with a 12" poster with the original cover design because we know you can't wait to show this off on your wall.

The album was mastered from the original master tapes and licensed from Essiebons Records. More often than not, the studio tapes were overdubbed or destroyed but in this case you get the highest possible fidelity for your maximum enjoyment.


Gyedu-Blay Ambolley is one of the key artists in the development of West African popular music. His 1985 album Cut Your Coat is widely regarded as the first example of Ghanaian rap and marks the birth of the now-dominant hiplife style. Before that, he was a central figure in the Afro-funk revolution of the 1970’s that brought the influence of James Brown and other American R&B artists into African music. Here’s the first-ever authorized reissue of a complete Ambolley album (he’s on many African compilations and plenty of bootlegs as well), and it’s a stone classic – six songs, 31 minutes, all killer and no filler. This was a very popular album in its day; the original is highly collectible not because of scarcity but because most copies are just worn out. Frank Gossner (Voodoo Funk blog, Lagos Disco Inferno) managed to locate and license the master tapes. Now you can put this one on the shelf right next to Fela, Geraldo Pino, Super Etoile, Ernesto Djedje, Orchestre Poly-Rythmo -- that would be the “absolute best of West African 70’s” shelf. Bonus attraction – some of the most inexplicable liner notes of all time (from the original, of course). Play often! 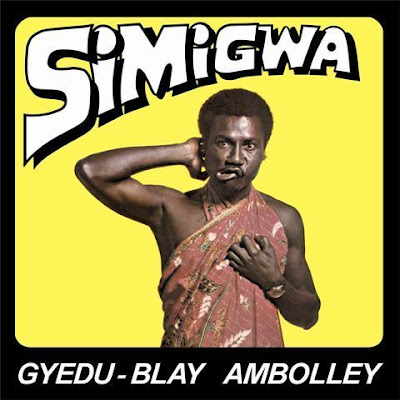