From Ghana: Worlasi - The Uncut (for free) 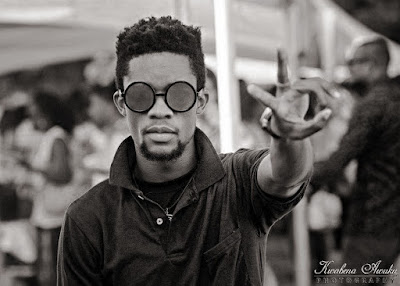 Worlasi drove us insane with his debut mixtape titled “Nuse” which had 14 tracks including the intro… His style of music gave birth to a new trend, and re-introduced Hiphop as it should be done in Africa. His debut mixtape earned him a lot of respect and rose his credibility as a talented and exceptional artiste.

‘The Uncut’ compilation are songs that couldn’t make to the “NUSE” Mixtape; and these are 13 exclusive songs which he produced and was mixed by Qube. This compilation featured other great talents like Krack Gyamfi, Emperaw, Laelaure, Kdxp, and BiQo. Just as the “Nuse” Mixtape, this compilation also talks about dreams, emotions and insights on life and a much needed discourse on black power, passions and owning our destinies.

Worlasi is here to make an impact and I can see Ghanaians embracing that “Weird” talent… He is not the regular kind of artiste you listen to daily, but he is yet to become that artiste you will always want to listen to after listening to him for the first time. Worlasi is not a stranger to us anymore; so we know what to expect on this one. Listen to greatness and deepness combined!

The undisputed revolutionary in the music scene is steadily filling us in with more of him and his originality. After the release of NUSE: STRENGTH WITHIN, his debut mixtape, he blesses us with a collection of tracks that couldn’t make it to the main album. THE UNCUT is a definite way of saying “here’s more, help yourself”.

MY WORLA prod by Qube begins with a pattern of chants in his native dialect. His dexterity in holding up a number of words in a thread on this tune was impeccable. MY WORLA talks of our need for some subject to be there for us-something to hold on to-and how we as individuals need to be that subject for others as well. With an amazing sound quality and great articulation, the message of disappointment in some others who wish only to reemphasize our failures because we failed to act their way is fully expressed in this track. A nice way to hit us with the realities of being a human being. The tune ends precipitously with an affirmation that we need someone to hang on to, regardless.

A narrative about his basic and secondary education and how ignorant we all are of the different forms an idea could take because we’re stuck, unwilling to open up our brains to other possibilities. “I be the John for your eyes but nigger that’s cool, I be the don for my eyes and that’s it, that’s it“, the tune speaks about how sad it is to have your potential underestimated while thinking outside society’s box of known concepts and norms. Self-produced, CARTOON certainly should have made it to NUSE. It has truths of finally embracing one’s weirdness to later discover that was only strength in thick disguise.

MOTIVATION ft Krack Gyamfi & Emperaw prod by Worlasi did as it had to and provided enough encouragement for anyone engaged in anything meaningful to take a mental trip into the joy at the end of that accomplishment and move on with it.

With a tune that one can easily vibe with, SATAN has a carefully chosen rhythm considering its concept. TOO LONG ft KDXP carefully follows with a lovely rhythm. The featured artist came in very, very, strong and delivered on the track, expressing why love should be reciprocal and enjoyed from both ends and the frustration that arises during the wait for the other party to feel up to it.

With a Danceable rhythm, this is Just a jolly tune, one to be enjoyed when having a long day. It is A break from the rather too frank expressions on the harsh realities of life expressed on the tunes that come before it.

Worlasi clearly needs more space. Space to create. He speaks with rage on this solemn tune to those individuals who find their way into our lives to slow us down and grants them a chance to exit the same way they entered, stealthily. On this very soulful tune which flattered his voice he had an unusually, beautiful style of singing the words out, probably because they meant a lot to him, with emphasis on the words that mattered.

In every relationship there’s the one who rules. This could be either of the parties in that relationship. Razzy is the kind of a girl you fall in love with but realize you should have come “materially” prepared. The one who’s presence earns you respect from your friends, that is the kind spoken of in this song.

All 13 tracks were beautiful in their own rights. THE UNCUT is enjoyable, it provokes thoughts, raises excitement and finds you in the middle of the misunderstandings of life. So “here’s more, help yourself”! 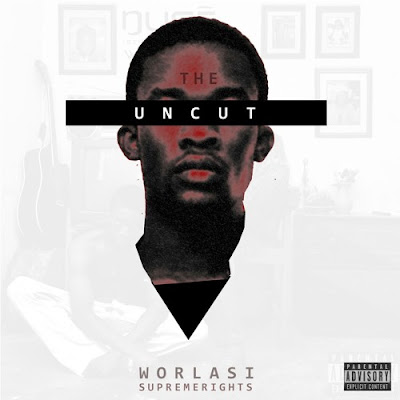 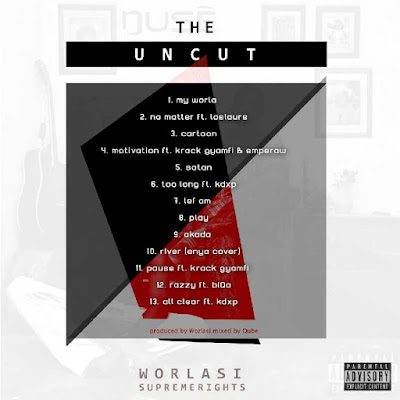 GET IT FOR FREE HERE!