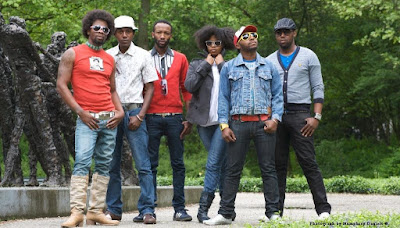 A stone’s throw from the church where Desmond Tutu organised the escape of the most wanted anti-Apartheid activists of Soweto, the BCUC band rehearses in a shipping container-turned-community restaurant, where their indomitable outspokenness echoes in a whole new way.

Make no mistake, this buzzing township has lost none of the creative, rebellious energy it had when the “Rainbow Nation”, with its now less-than-vibrant colours, emerged twenty years ago.

Like its elders, Bantu Continua Uhuru Consciousness sees its music as a hedonistic trance, but also as a weapon of political and spiritual liberation.

Artistic heirs to Philip “Malombo” Tabane and Batsumi, they seek to give a contemporary voice to the ancestral traditions of indigenous peoples. Jazz sounds of 1970s and ‘80s productions have been replaced by hip-hop influences and a punk-rock energy.

It all started about twelve years ago in a community centre workshop. The format of the band hasn’t changed much since that time, but its musical language has been greatly refined. While vocals and percussion have always driven their music, in the past they’ve explored “electronic”
avenues and for many years even included a rock guitar that swung between folk and free jazz.

BCUC found its magic formula in 2013, however, when they folded a frenzied electric bass into the simple drum-and-vocals mix.

And that’s the alchemy of “Africangungungu”, the name they’ve given to their “afropsychedelic” music. Both on stage and on this album (their first commercial production), their songs refuse to be formatted. Their “incantations” in Zulu, Sotho and English and their funky modulations
extend over twenty minutes in a whirlwind of sound reminiscent of Fela’s Afrobeat.

Nguni rhythms mix with Tsonga rhythms, the whistles of Bhaca and Shona miners meet the traditional Imbomu horn, while ancestral war songs and Ngoma busuku (night song) choruses mingle with the soul music of singer Kgomotso and the raging rap of Jovi and Luja.

“Yinde”, which opens “Our Truth”, means “the road”: a symbol of the distance left to cover towards a fairer South African society. Similarly, “Asazani” (“we don’t know one other”) pleads for a reconciling of all the components of the “Rainbow Nation”.

BCUC’s willingness to look these social and identity questions in the face has already led to the banning of one song from their only self-produced EP, which points the finger at a national idol. But neither this event, nor the criticism to which they are exposed by their refusal to belong to a specific movement, can change their minds. “Music for the people by the people with the people” – a people they refuse to box into one community, to circumscribe to one skin colour. 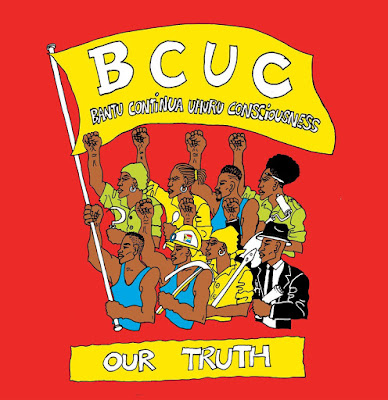 Foodzone is an eatery situated in Lakeview, Soweto, right next to the Rea Vaya bus station on the T1 route. Looking outside from the interior — Foodzone’s located inside a shipping container housing a variety of musical instruments in one corner and a stove where meals are prepared in another — one can see Regina Mundi church to their right and Thokoza Park to their left.


South African afro-psychedelic future pop sextet Bantu Continua Uhuru Consciousness (BCUC or B-Cook work just as well) are not only part-owners of the venue, they also hold their rehearsals in here, on a floor space they clear up to make room for their instruments. The band consists of Nkosi “Jovi” Zithulele, Kgomotso Mokone, Thabo “Cheex” Mangle, Mritho Luja, Lehlohonolo “Hloni” Maphunye, and Skhumbuzo Mahlangu. Mosebetsi Ntsimande of the band Uju is a featured bassist.
Between them, they rap in eloquently-phrased Sesotho verse; they howl fire and brimstone to the tune of a thousand angels; they harmonize, play nose flutes, bang bass drums; they jiva ispantsula to the shy rhythm of the tambourine; and they do the ‘tribal thing’, you know, feet-in-the-air, indlamu, Zulu warrior, live-wrangling for the hood, the ‘burbs, and the outer-skirts thing?! Word!

Thrown into the mix: whistles (izimfijoli) commonly used by amaBhaca, but also found in Lesotho where mokhibo/moribo women use them to rally up the audience’s participation and liven up the song; and imbombu, an instrument roughly 3 meters long, invented by Shembe adherents with the Biblical trumpet as inspiration.

I first saw BCUC live at Oppikoppi festival two years ago. It was on a late afernoon, Saturday, and they were performing at Skellum — a stage neither big nor too small, perfect for a band whose reputation as live performers rests on their willingness to compete against and out-match the last live show they put on. They had everyone tripping towards dizzying heights, entranced by their Nazareth Baptist-style chants. Their manic, relentless, hard-hitting zeal and their head-bopping humdrum rock-n-roll attitude turns them into miracle workers on stage.

A few months later, we were all squeezed into rapper/producer Joint Pusher’s home studio in Cosmo City, north of Johannesburg. BCUC were working towards an album and decided to decamp to JP’s in order to test out a few ideas. It was hot outside, sweltering even, mid-Summer highveld vibes. Regular swigs from a cold water bottle were vital!

The room, fitted with a couch and not much else besides JP’s studio equipment, became a hub of activity. JP started the session by programming the drum pattern under Jovi’s guidance. After getting the basic groove, an assortment of percussive instruments the crew had brought along were added — shakers first and then, ultimately, Cheex’s nimble hands producing complex sounds as they caressed the twin congas.

Cheex comes across as quiet and reserved, almost reclusive, in person. He’s the antithesis to Jovi and Hloni’s hyperactive personas, almost in the same energy spectrum as Luja. Put congas in front of him, however, and these notions and comparisons cease to exist. He transforms. He becomes a beast, each percussive line feeding a style of playing so free and unhindered it sounds like he’s charting new territory, coursing along with jugular jungle styles while getting drunk in the punch of the conga gods.

The session’s well underway by the time Kgomotso adds harmonies atop the loop. At this point, BCUC’s signature imbombu, hand-crafted from the finest zinc by merchants at Kwa-MayiMayi in Durban, has also graced the song.

“When we started the band, we didn’t start it because we wanted to make money. We wanted to start the band because we felt like there is a voice that is not there, you know?!”

Jovi utters the words while cooling off under the tree shade following the second round of rehearsals for the day. Luja’s preparing food for customers who’ve just ordered and Mosebetsi, the featured bassist, has left for other missions in the city. The rest of the crew, along with a few friends, are seated on the same restaurant bench underneath the tree with Jovi, sweaty and hyperventilating.
The s’camto’s (conversation) about their roots. Back in the early 2000s, Jozi had a buzzing underground scene out of which noteworthy names emerged: Sliq Angel and MXO; Simphiwe Dana; Lebo Mashile; Tumi Molekane and his (former) band The Volume; and the now-defunct Kwani Experience — perhaps the closest to BCUC, at least in their militant, pro-black philosophies.

“We are older than most of them, obviously, in terms of how long [we’ve] been together, you know?! The difference between us and them: I reckon they wanted to make money with the music, and thina we wanted to make music and then money will follow, because obviously when you do music, then money should follow. We wanted to be this voice for the black urban [youth who] are culturally inclined [and] proud of [its] musical heritage,” says Jovi.

The collective wanted to become a bridge between what they call ‘muzik wa diplaas’ and ‘muzik wa ko kasi’ — essentially, an alternative to traditional music, and kwaito and house music. “Back then, we were annoyed by i-digital music, but now [it’s] got these guys who are using other machines, and they make it almost live now. You mention abo-Fantasma [and]Goldfish – at least you can respect that.”

The aim, therefore, was to play music that utilised instruments, and secondly to say something with substance.

What was the central message at that time, I ask.

“Black music, it hasn’t changed,” says Jovi and Kgomotso, almost at the same time. Hloni calls it ‘shebeen muzik’, the type you don’t get to hear on radio. It’s the type of music sung by everyone.

“I think we’re speaking about ourselves,” says Kgomotso. “Our ideology, B-Cook’s sense of consciousness is not about us going outside of ourselves to find enlightenment. It’s about finding out who we are within our families. Ko-ntlung (at home), what’s happening? How do you incorporate it with what happens in Cheex’s place? At Hloni’s place? At Jovi’s place? [It’s about] how we build bridges and how we educate each other to be better people. For us, that is the consciousness — just being good people and putting that positivity out there.”
africasacountry.com