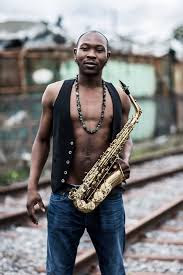 One year after its release, we revisit Seun Kuti's Black Times album, its impact and how the Nigerian media has continuously turned a blind eye to it.

Released in the first quarter of the year, the eight-tracker album went under the radar for the major part of the year, only gaining some buzz in the final month of 2018.

In the aftermath of his nomination at the 61st edition of music's most glamorous awards, Grammys in the 'World Music' category, which held on Sunday, February 10, 2019, the media ran amok with stories and eulogies of Seun Kuti's music.


The subsequent news that he had been selected to perform at the pre-award show [Which he, however, failed to attend] further served as juicy content and hot topics within the music community, celebrating 'one of their own' in the loudest of voices with a number of his records getting the occasional spin on radio programs.

However, before Grammy night, the industry especially the media had largely behaved in a manner non indicatory that of the very few really dope projects released during the year, that of Seun Kuti ever made the space and immediately after the Grammys, particularly with the album failing to bring home the prestigious prize, it has been 'same of the same,' forgotten and shut out of conversations or airplays.

A regular flip through the over 20 radio stations that control the airwaves in a metropolitan city like Lagos will have you listening to regurgitated music from some sizeable number of pop artists, with rarely any from the stable of one of the year's standout material.

If the Grammys consider the Black Times as one of the best albums out of the continent in the past year, an album that features the likes of international stars likes Yasiim Bey, Grammy winning R&B musician, jazz pianist and producer Robert Glasper and multi Grammy award winner Carlos Santana, how come the media and music circle back home make it seem so much like an anonymous project?

Outside a few blogs that mentioned it in its 'Album of the year' lists, it was not even considered for any of the notable awards.

While undoubtedly there is a cloud that surrounds his surname with Fela's music only occasionally remembered during a time of crisis or rebellion, the Black Times album is not all about activism as he also offers short, danceable music that will fit into any drive home playlist or music blog roundups.
Songs like 'Bad Man Lighter' is a high-energy, party starter providing a balance to others like 'African Dreams' or 'Theory of Yam and Goat.'

In an interview he had with Pulse's Ayomide Tayo earlier in the year, Seun pointed an accusing finger at the media when asked if he felt young Nigerians are beginning to appreciate his type of music.
''I think if they are exposed more to music they would appreciate it... it is a matter of exposure and visibility.

I think our entire media, and not only in Nigeria really, I think it is a global phenomenon that people that own and control the media and control the institutions of influence want the world to see things from their perspective. They want their narrative to dominate society. In all the media that they own, they want the things that represent them to be showcased.

I just feel that people in Nigeria, young people and old people, should be exposed to as many forms of music as possible especially music that represents us and generally elevates our consciousness. We shouldn't stay on one plane and one basic level.''

Considerably, there is a significant amount of work required to be done on the backend these days to promote one's project but the media have gone through a self-fulfilling cycle, where only popular songs ever get pushed, coupled with Payola still a leading factor in the order of things.

But quite unlike what they have you believe, most people's actual listening preferences are quite different and many of us enjoy a wider variety of music than most OAP's give us credit for, especially when the song is one worthy enough for consideration by the biggest music event in the world.

The impact of Black Times

On the impact of the album since it was released, it will be unfair to restrict Seun’s success solely to his Grammy recognition. [But it very rarely gets any bigger than the Grammys]

Shortly after its release, the album debuted at the No 8 spot on the Billboard world music chart, his very first album to achieve such feat and in the past year, Seun has performed at a number of festivals and concerts across Europe, Asia and America.

In August, he was on stage at the Haldern Pop festival in Germany and the Blue Note in Tokyo, Japan, and also went on a tour of the United States performing at sold out shows.

The album also helped solidify his presence in certain areas where his music had previously not penetrated confirming his place as a worthy leader well able of carrying the torch of Afrobeat to the next generation.

Music journalists in Nigeria, from the broadcast, print to online, who are supposed to be the industry tastemakers, introducing the listeners to the music they don't usually get to hear have all failed in their responsibility to the audience.

Instead of providing a neutral platform, many have chosen to behave like gatekeepers, limiting the standards of acceptable and play worthy records, focusing only on what is trending, and unconsciously playing a role in the decline of other genres.

Black Times may not in anyway be close to the popular sounds that millenials tune their dials in search of regularly, that doesn't deny the fact that this is a well polished and crafted collection of songs that finds Seun Kuti at the most matured state in his career.

This is his most accomplished album to date, one solid hour of vibrant music that is built on traditional Afrobeat sound with a lot of influence from contemporary styles, an album worth celebrating.

Perhaps his outspoken nature on recent social happenings may also be a factor but that hasn't stopped the radio from playing Davido who in the past few months has fully put on the political garb.
Seun, who heads the Egypt 80, a band he took over following the death of his father, may not have created the Afrobeat sound but he has succeeded in making it unique in his own way and even when we don't readily consider other genres outside the pop sounds, it helps if we indulge in these type of projects even if it is once in a while.

One year after it was released, 'Black Times' provides timeless music and it is upto the Nigerian media to do better and ensure its message widens to the ears of the young listeners.