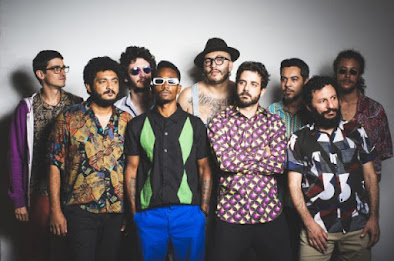 Shortly after arriving in Lisbon, Portugal, in 2017, guitarist Zé Victor Gottardi joined eight more Brazilian and Portuguese musicians to form Carapaus Afrobeat. Before landing on the old continent, Zé had already played in the Abayomy Afrobeat Orchestra, of which he was one of the founders, and had also played with Jards Macalé and Céu. His goal with Carapaus is to revere African music, faithfully following the concept of the word afrobeat: “beat of afro origin”.

“I realized that the afrobeat scene was very vague [in Lisbon], there was only one band, They Must Be Crazy, [who are] very good by the way. I booked a Fela Day, which is an event to celebrate Fela Kuti’s birthday, and I set up Carapaus for the occasion. The members were very well chosen, they’re all monsters”, says Zé.”On the guitar with me there is Gabriel Muzak, who played with Frequency Selectors and Funk Fuckers, as well as Adriana Calcanhotto. On the drums there’s Del, who has played with Roberta Miranda. On keyboard there’s Cláudio Andrade who has accompanied Gilberto Gil, Jorge Ben Jor and Seu Jorge for 10 years. On the bass Ricardo Dias Gomes, who played with Caetano for 10 years. On the trumpet, Cláudio Gomes, one of the band’s two Portuguese [members]. He’s very active in the Lisbon music scene. On the trombone André Pimenta, also Portuguese, on the sax Alexandre Pinheiro, a saxophonist from Belém do Pará, who is fundamental to give a more Amazonian smell to the band. In percussion we have Duvale, a master who has ruled the timbal wing at the samba school of Mangueira (Rio de Janeiro), in addition to playing with Gabriel o Pensador and Sandra de Sá”.

This musical quality, added to the lack of afrobeat bands in Portugal, helped Carapaus quickly gain prominence. His commitment to maintaining all the original cadence of the African rhythm is clear on all eight tracks of the group’s second album, Dois. The influences of Fela Kuti and Tony Allen (who played on the single “Do Allen / Diabo na Terra”, along with with Boss AC and Oghene Kologbo, which preceded the album’s release) are evident. But it is not only the Nigerian source of afrobeat that supplies components. The bases also have funk, jazz, ska, elements of Portuguese musicality and spicy Afro-Brazilian seasoning, taking references from Naná Vasconcelos, Tim Maia, Elza Soares and from the batuques of African religions.

“We like to be broader with the issue of influences. We have Afrobeat in the name, but we take it more literally. Everything we like came from Africa: jazz, blues, funk, hip hop… everything had a direct influence from the African continent or its immigrants, so we think it makes more sense for us not to just be stuck with the Nigerian style of playing”.

This whole merger generates good results. The texture created also reveals the Latin DNA that Carapaus music has in its genetics. The different experiences used lead to a groove with Latin American rhythmic patterns, despite being recorded in Europe across two sessions. It has a swing. Some videos of live performances show the energy that the group led by Zé transmits. However, their upcoming performances had to be cancelled, as with everyone else, due to the Coronavirus pandemic, just at the moment when they had found their space, ascending in the Portuguese music scene with their new album freshly released.

“There was no time to do practically anything. At first we were very weak, and little by little we resumed our activities the way we did. We recorded a series of songs at home, literally each one at home, and it was super cool. [The videos are on YouTube.] But we are resuming contacts with festivals, sending material and doing what we can”, says Zé with optimism. “We have content already recorded for about 2 more records, but we still have to relaunch Dois, since we were unable to play as we had planned. We hope that in 2021 we will be able to circulate in Europe, because the band has extreme potential”. 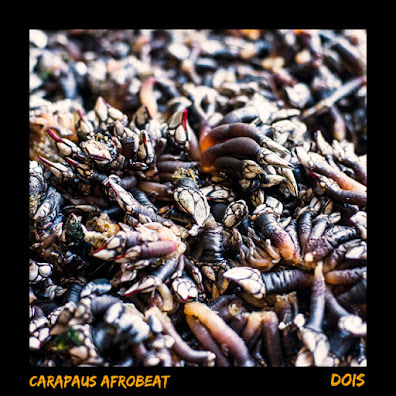 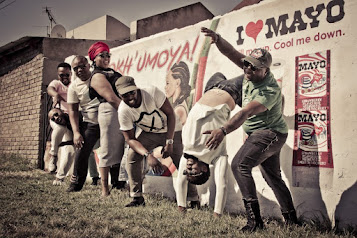 Each of the three songs, though all very different, contain the essence of ‘Africangungungu,’ the name BCUC has given to their ‘afropsychedelic’ music. The tracks are best described as vibrant—each is buzzing with the distinct energy that BCUC brings to all of their music and performances. A mix of traditional indigenous South African music with funk, hip-hop, and punk-rock influences, BCUC’s music is nothing short of unique. As vocalist Kgomotso Mokone declared, “We bring fun and emo-indigenous Afro psychedelic fire from the hood.”

The album also tackles the issues of modern Africa head-on, including commentary on the harsh realities of uneducated workers. One song from a previous self-produced EP expressed views about a national idol and was so controversial that it was ultimately removed from the album. Despite this and other criticism regarding the group’s refusal to identify with a single social or political movement, BCUC sticks to their philosophy of creating “music for the people by the people with the people.” This philosophy is expressed in the video for the final track, “Nobody Knows (the Trouble I’ve Seen), filmed in Soweto.

Although Bantu Continua Uhuru Consciousness faces criticism for their stances, their commitment to representing the voiceless, speaking on important social and political issues, and exposing audiences to indigenous music is admirable. Emakhosini perfectly represents and lives up to the rebellious, lively spirit of the group.

There may be stirring harmony vocals, but these dynamic, ‘afropsychedelic’ artists are anything but bland.

BCUC, AKA Bantu Continua Uhuru Consciousness, are a young seven-piece band from Soweto who are shaking up South African music. Vocals and sturdy harmony work have always played a dominant role in township styles, but here the tradition is updated and reworked with the powerful but subtle use of drums and bass.

They play lengthy songs (the opener lasts nearly 20 minutes) that mix ancient and modern influences in a style that is distinctively South African, and includes soulful, elegant playing with passages that are as dramatic and frantically menacing as the best Congotronics bands in Kinshasa. BCUC have an impressive sense of dynamics, allowing songs to develop, fade away, change direction and then build to an often furious climax. Insistent, inventive bass guitar work holds it all together, as in Moya, which begins with a brooding riff and distant chanting, before the voices and percussion take over. Then there’s another switch, as echoes of what sound like ancient African war chants give way to cool, soulful vocals from Kgomotso Mokone, the one female member of the band, before the drums and chanting vocals return.

Elsewhere, what they call their “africangungungu” and “afropsychedelic” music includes passages of sturdy township styles. There are stirring harmony vocals on Insimbi that would provide a reminder of Ladysmith Black Mambazo if it weren’t for the drums and bass riff. The final track, Nobody Knows, brings further surprises. It starts off with a reworking of Nobody Knows the Trouble I’ve Seen, the gospel classic that has been recorded by everyone from Louis Armstrong to Sam Cooke, but is then transformed as chanting, rap and percussion take over. Those who fear that South African music is becoming too bland, or dominated by US influences, should take heart.

After a year of intensive touring in Europe in 2017, the group from Soweto is back with a second album. Emakhosini is as stunning as their first album, Our Truth, released in 2016 to accolades in the French media. As on their first disc, the band offers two long pieces of funky tribal trance, Moya and Insimbi, that by their intensity evoke the Afro-beat of Fela even though they were not inspired by it. Because the music of Bantu Continua Uhuru Consciousness (which can be translated as “Man on the move towards his freedom of conscience”) draws on the South African cultural roots of the group’s members — Zulu, Sotho, Shangaan — to invent a contemporary electric version of their musical traditions. On these ancestral rhythms and spiritual songs, BCUC builds a music tinged with soul, rap, and a driving by a punk energy. 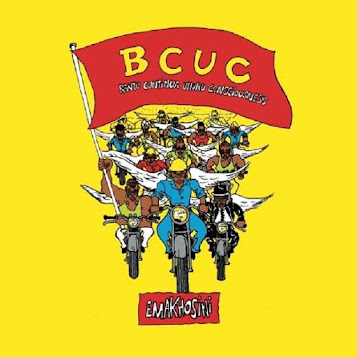 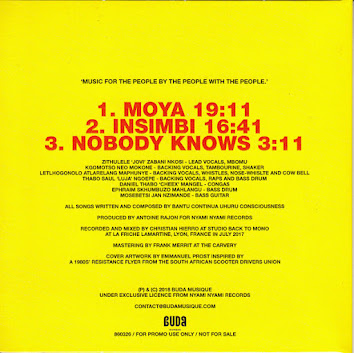 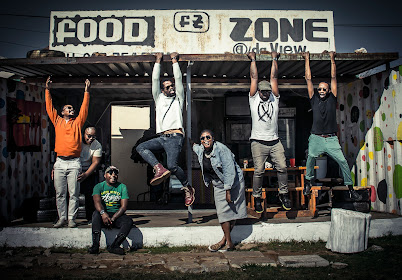 A stone’s throw from the church where Desmond Tutu organised the escape of the most wanted anti-Apartheid activists of Soweto, the BCUC band rehearses in a shipping container-turned-community restaurant, where their indomitable outspokenness echoes in a whole new way.

Make no mistake, this buzzing township has lost none of the creative, rebellious energy it had when the “Rainbow Nation”, with its now less-than-vibrant colours, emerged twenty years ago.

Like its elders, Bantu Continua Uhuru Consciousness sees its music as a hedonistic trance, but also as a weapon of political and spiritual liberation.

Artistic heirs to Philip “Malombo” Tabane and Batsumi, they seek to give a contemporary voice to the ancestral traditions of indigenous peoples. Jazz sounds of 1970s and ‘80s productions have been replaced by hip-hop influences and a punk-rock energy.

It all started about twelve years ago in a community centre workshop. The format of the band hasn’t changed much since that time, but its musical language has been greatly refined. While vocals and percussion have always driven their music, in the past they’ve explored “electronic” avenues and for many years even included a rock guitar that swung between folk and free jazz.

BCUC found its magic formula in 2013, however, when they folded a frenzied electric bass into the simple drum-and-vocals mix.

And that’s the alchemy of “Africangungungu”, the name they’ve given to their “afropsychedelic” music. Both on stage and on this album (their first commercial production), their songs refuse to be formatted. Their “incantations” in Zulu, Sotho and English and their funky modulations extend over twenty minutes in a whirlwind of sound reminiscent of Fela’s Afrobeat.

Nguni rhythms mix with Tsonga rhythms, the whistles of Bhaca and Shona miners meet the traditional Imbomu horn, while ancestral war songs and Ngoma busuku (night song) choruses mingle with the soul music of singer Kgomotso and the raging rap of Jovi and Luja.

“Yinde”, which opens “Our Truth”, means “the road”: a symbol of the distance left to cover towards a fairer South African society. Similarly, “Asazani” (“we don’t know one other”) pleads for a reconciling of all the components of the “Rainbow Nation”.

BCUC’s willingness to look these social and identity questions in the face has already led to the banning of one song from their only self-produced EP, which points the finger at a national idol. But neither this event, nor the criticism to which they are exposed by their refusal to belong to a specific movement, can change their minds. “Music for the people by the people with the people” – a people they refuse to box into one community, to circumscribe to one skin colour.

Bantu Continua Uhuru Consciousness sees its music as a hedonistic trance, but also as a weapon of political and spiritual liberation. Artistic heirs to Philip “Malombo” Tabane and Batsumi, they seek to give a contemporary voice to the ancestral traditions of indigenous peoples. Jazz sounds of 1970s and ‘80s productions have been replaced by hip-hop influences and a punk-rock energy. While vocals and percussion have always driven their music, in the past they’ve explored “electronic” avenues and for many years even included a rock guitar that swung between folk and free jazz. BCUC found its magic formula in 2013, however, when they folded a frenzied electric bass into the simple drum-and-vocals mix.BCUC’s willingness to look social and identity questions in the face has already led to the banning of one song from their only self-produced EP, which points the finger at a national idol. But neither this event, nor the criticism to which they are exposed by their refusal to belong to a specific movement, can change their minds. 'Music for the people by the people with the people' – a people they refuse to box into one community, to circumscribe to one skin colour. 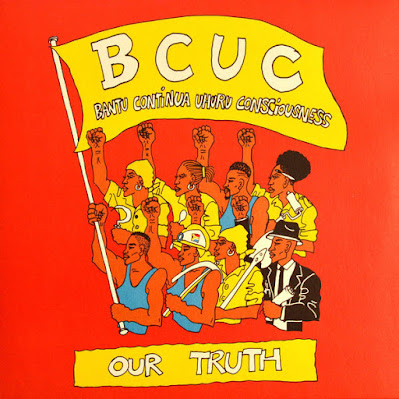