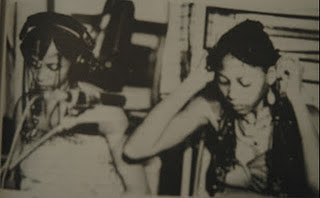 We first came across The Lijadu Sisters a few years ago on an afro psychedelia compilation and they quickly became a much-loved favorite of ours. We were therefore incredibly excited when we discovered that Knitting Factory Records last year started re-issuing the sisters’ four long out of print albums – and even more excited when we recently got the chance to ask Knitting Factory’s Tim Putnam about the sisters, their unique story and the long process of bringing their fantastic music out of obscurity. Read the interview and listen to some Lijadu tunes below. Then check out Alex Petridis’ great review of ”Afro-Beat Soul Sisters” and buy your Lijadu albums here.

How did you first come across Taiwo and Kehinde Lijadu?

I was introduced to the Lijadu Sisters by Will Glasspiegel who was working with the sisters at the time. He approached me as our label was in the process of rereleasing the entire Fela catalogue along with Seun’s and Femi’s records as well. He thought we’d have interest since the sisters are Fela’s cousins and the music is so engaging. I then got to meet the sisters who were living up in Harlem. I had never in my life met two people so closely tied together on every level as Taiwo and Kehinde and was drawn to them.

What made you want to take them out of obscurity?

The music, the incredible story, and ultimately getting to know the sisters themselves.

How did you manage to convince the sisters to re-issue their albums? I’m sure you where not the first ones to try your luck in this.

It wasn’t me who convinced them. I don’t think anyone convinces them of anything. They were the ones who decided over a long period of time what they wanted to do. It was the better part of two years between meeting the sisters and them wanting us to release the albums before we were able to come to an agreement. That is really its own story altogether.

Their records have been out of print for years. But are there other factors that might explain why it has taken so many years for the sisters to receive the reserved recognition?

The sisters did receive recognition when the albums were first released, but their music ultimately became obscure and increasingly rare in physical formats reserved for collectors and enthusiasts. The practicality of what often happens to so many musicians over time doesn’t lessen the quality of lasting relevant music. As you said, the records were out of print and very difficult to get.  We had to locate good copies of vinyl to master from which was a painstaking task as the original reels / tape no longer exist. We still have never been able to locate the very first album they released called Urede. I found an old print ad for it so I know it exists, but I have as of yet never been able to find the album. Bringing this music back to life simply allowed people to recognize the sisters once more for what they are as two beautiful and unique songsmiths.

Their story – two independent female artists in the 1970s Nigeria – seems quite unique as does their intriguing mix of disco, funk, reggae, highlife and psychodelic rock etc. Do you see them as being something of an outlier compared to mainstream Kuti-dominated afrobeat?

I don’t see them as being anything other than two extremely gifted individuals who took a number of influences and created their own sound musically. They have always done things on their terms and continue to do so in every aspect of their lives. Fela did the same thing creating afrobeat on a massive level, but he didn’t have a twin brother to harmonize with. The sisters are utterly unique in that regard. Two voices which act as a singular voice. It is why their music stands out from a lot of other music, not just African.

How have the sisters reacted to their reemergence after decades on relative obscurity?

I can’t really speak for the sisters on that point. I will say that the sisters have always looked towards the future and the music they want to make, not just the music they have made. Hopefully this will allow them to move forward with their career.

Any chance of seeing the sisters back on stage?

I hope so. They played a benefit show for a school for the blind last year in NY which made for a very special evening and gave me hope that they will continue to perform. They have sung to me many times in the past. It is both spiritual and deeply moving. I really hope others get to see them sing live again on their terms with the right mix of musicians. They are very particular about who they play with and there aren’t Yoruba drummers on every corner in NY.

The trend of DJs, vinyl diggers and labels from ”the West” traveling to Africa to (re)discover old vinyl gems has started to receive some criticism for being ”neo-colonial” in focusing mainly on artists within funk or rock that fit well into the exotic musical story expected from Africa and ignoring the more traditional music. Is this a fair point in your view? And how do you see the Lijadu Sisters fitting into this picture?

I don’t think that is a fair point of view. As far as we know, we’re all from Africa originally and so is all of our music. It has just evolved over the last several tens of thousands of years constantly splintering and changing into what it is today. People have lost perspective on what it is to be human and how we are all related. Neo-colonialism simply doesn’t apply to finding relevant music and sharing it with other people. The Lijadu Sisters have many traditional elements in their music far beyond just being funk or rock. Keep in mind as well, a lot of this music has a political and social element which have resonating themes today as much as it did when it was written. That is a large part of the lasting appeal.

Danger and Mother Africa have been reissued in the past months. What’s up next? Any other African musical treasures up your sleeves?

We have two more Lijadu records as well with Sunshine and Horizon Unlimited. We just released Fela Live In Detroit 1986 which is the first new Fela release in a number of years as well. Hopefully they’ll be much more to come.