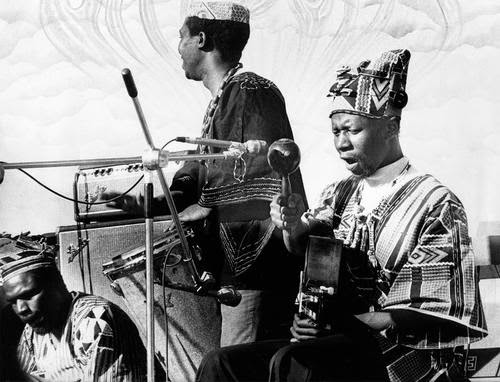 Sometimes a vinyl LP arrives in the mail and what an amazing good surprise it is! This week we happened to receive the latest reissue LP from Matt Temple at UK label Matsuli Music, heavy 180g vinyl, thick, non-plastified sleeve, photography and in-depth liner notes, a bonus CDR version of the album… Before having heard a single note of music we already know this is high quality stuff, fully respectful of music lovers who agree that vinyl is good for you. Batsumi is one of the holy grails of South African spiritual jazz. In 2011, Matsuli Music reissued their first, self-titled album from 1974. Sorry, haven't heard it but all reviews were laudatory. So the excitement generated by this second album from 1976 landing at our doorstep was high, and we were right about it: you will need this record in your shopping list. Out of print since its original release in the 1970s, 'Moving Along' has been lovingly restored from the original master-tapes. Lasting just a bit less than 30 minutes, this one you'll play over and over. Recorded during apartheid and banned at the time, this lost album of Sowetan afro-jazz rightfully deserves praise and (re-)discovery!

Sleeve notes :
From their inception in 1972 Batsumi were in search for new indigenous sounds and in 1974 they cut their first disc BATSUMI, popularly called BATSUMI SOUND by their fans.

MOVING ALONG consists mainly of familiar SOUNDS to prepare the many fans for BATSUMI's third Album which will revel in rapturous indigenous sounds BATSUMI caught in their quest. Al the songs on this Album are composed and arranged jointly by the Group.

Buta-Buta is the main vocalist, blind Minesh Sibiya plays bongos and sings Toi-Toi. Adel Maleka who is the leader of the group, is the percussionist and plays drums. John Maswaswe Mothopeng the blind pianist also plays acoustic guitar. All these are founder members who for the first four years have been engaged in hunting for new sounds.

Press Release:
Matsuli Music follow up their acclaimed Sathima Bea Benjamin release with the second and final installment in the Sowetan afro-jazz group Batsumi's untold story. The deep spiritual indigenous afro-jazz sounds ofMoving Along follow in the footsteps of Matsuli's timely reissue in 2011 of Batsumi's debut. Out of print since 1976, Moving Along is now lovingly restored from the original master-tapes and contains additional photography and liner notes.

Batsumi was formed in 1972 by bassist Zulu Bidi and pianist Lancelot Sello Mothopeng, and led by the blind guitarist Johnny Maswaswe Mothopeng. The development of Batsumi’s powerfully original afro-jazz sound has roots in the Malombo Jazz Men of guitarist Philip Tabane, drummer Julian Bahula and flute player Abe Cindi. Malombo’s innovation was to choose a different path to their South African contemporaries who referenced the American modernist jazz language of Monk and Parker. Batsumi did not cleave to the sparse instrumentation of Malombo, nor were they new messengers of a specific tradition. Instead they presented their vision of modern afro-jazz within a wider instrumental setting, allowing its African roots to spread out and define new spaces.

The group’s debut album arrived amidst a period of intense political, intellectual and artistic ferment stimulated in large part by the teachings of Steve Biko and the Black Consciousness Movement. ‘“Say it loud! I’m black and I’m proud”. This is fast becoming our modern culture,’ wrote Biko in 1971, ‘a culture of defiance, self assertion and group pride and solidarity.’  Biko forged a visionary and potent message of South African redemption, pride and defiance. It took culture to its heart, and in the wake of Biko’s message a burgeoning arts scene rooted in the black and African experience flourished. But by 1977 the briefly outspoken theatre groups, bands and poets of Black Consciousness faced a new wave of official interference and surveillance, and many artists and musicians were driven into exile; and bands such as Dashiki and Batsumi, who had briefly made their mark at festivals, small clubs and theatres, vanished.

The first Batsumi LP is incredibly scarce, but at the time it seems that Batsumi had garnered enough reputation that the LP was earmarked for a US release on Stax on catalogue number STS-5517. Fellow musician Ndikho Xaba, who was in exile in the US during this period, recalls that the group were revered amongst exiled South Africans, despite the fact that very few of them had actually managed to hear the LP. This regard had been fostered by respected musicians, including Philip Tabane and Jonas Gwangwa, who knew their work and had awarded them the highest praise. If the self-titled first album was scarce, Moving Along, however, seems to have left virtually no trace. Very few copies of the original record exist, and it has been speculated that there was either no official release or only a very limited issue.

The original sleeve-note suggests that a third Batsumi LP was in the works in 1976. Sadly, it never came into view, and the only known recordings to have been issued by this extraordinary group are Batsumi and this sequel. With this re-release of Moving Along Matsuli Music is proud to have brought Batsumi’s entire known catalogue back into print. We hope that through these releases, Batsumi will be recognised for the contemporary and historical prominence that their unique music so richly deserves.

Matsuli Music is an independent record label specializing in vinyl reissues of rare and out of printoriginal South African afro-jazz. To date the label has released Dick Khoza’s Chapita (orig. 1976), Batsumi’sdebut album (orig. 1974), Sathima Bea Benjamin’s African Songbird (orig. 1976) and Batsumi’s Moving Along (orig. 1976). Forthcoming re-issues are set to include work by Ndikho Xaba and the Natives, Harari, Movement in the City, Bheki Mseleku and TeteMbambisa. The label is managed by Matt Temple in London and Chris Albertyn in South Africa, both of whom have been involved in promoting indigenous South African sounds since the late seventies. Both are contributors to the key South African music blog Electric Jive.

"One of the labels deserving a big shout out is Matsuli Music." - Gilles Peterson

"Moving Along might be nearly 40 years old, but the music could still get 2014 partygoers dancing." - Gwen Ansel/Business Day South Africa 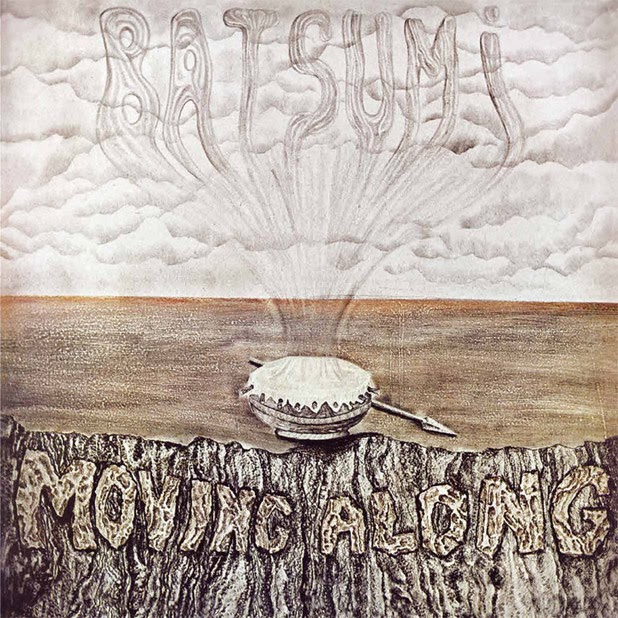