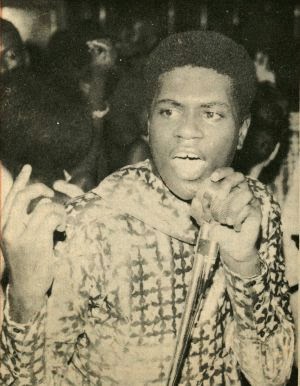 A playboy bandleader and singer, he helped shape African music

When he appeared at the Barbican in London last May, the singer, guitarist and bandleader Geraldo Pino, who has died aged 69, revealed himself as one of the forgotten fathers of African popular music. He had a major influence on west Africa's soul, funk and Afrobeat scene in the 1960s and 70s, and made a huge impression on the young Fela Kuti, yet his music had been largely unheard for the past 30 years.

Born and raised as Gerald Pine in Freetown, Sierra Leone, he was the son of a Nigeria-based lawyer and lost his mother and sister at an early age. Rebelling against his background, he started playing music at a social club and co-founded the Heartbeats at the start of the 1960s, playing covers of American hits and Congolese versions of rumba, then sweeping west Africa. The most famous Congolese musicians were Franco and Dr Nico, whose names inspired Gerald Pine to turn into the exotic "Geraldo Pino".

Playing Freetown nightclubs such as the Flamingo, Palm Beach and Tiwana, the Heartbeats became one of the highest earning bands in west Africa, and when television was introduced in Sierra Leone in 1962, Pino and the Heartbeats had their own show. In early 1963 they cut their first records - including Maria Lef For Waka, Heartbeats Merengue and Zamzie - which were released on his own Pino Records label. Zamzie is still used by Voice of America as a signature tune.

Africa was alive with dance music in those optimistic, post-colonial days and the Heartbeats provided a sophisticated, internationalised sound which began to challenge the ubiquitous highlife. Pino was also a great manager, promoter and businessman. Touring Ghana and Nigeria (1965-67), he was very much the playboy pop star, with a Pontiac convertible, flashy clothes and, most importantly, hardware unheard of in Africa at that time: imported amplifiers pumping out the sound of his electronic instruments and a six-microphone PA system.

Pino had the stage presence to match, impressing women and men equally. Among his 1960s and 70s hits were Power to the People, Give Me Ganja, Let Them Talk and Make Me Feel Good.

He impressed Fela Kuti (then still Ransome Kuti) when he played Lagos, Nigeria. At the time the Nigerian was playing jazzy highlife while Pino arrived with James Brown's style of music and formidable equipment. "He had all Nigeria in his pocket," Fela said in 1982. "Made me fall right on my ass, man."

Pino returned to Nigeria in 1967, and later that year took up a residency at the Ringway hotel, Accra, Ghana. The original Heartbeats broke up at the end of the decade and he recruited Ghanaians for the new Heartbeats 72 from a psychedelic band, the Plastic Jims. In the 70s they played west African concerts alongside Jimmy Cliff, Rufus Thomas and Manu Dibango. Pino's records made him famous as far away as Kenya.

In 1969 he settled in Nigeria and never left, buying a TV station and the Airport hotel in the city of Port Harcourt. There he introduced up-and-coming Camerounian musicians and played with Fela Kuti. In 2005 two of his albums were reissued, bringing his sounds to a new generation. In London last year, he played again with former Heartbeats drummer and arranger Francis Fuster, and despite failing health acquitted himself well.

Pino had cancer and was diabetic. A Port Harcourt paper reported that he was being treated for "a mere pain on the foot when he finally gave up the ghost". Pino never married, though he is believed to have fathered several children.