“Without patience, nothing is possible” 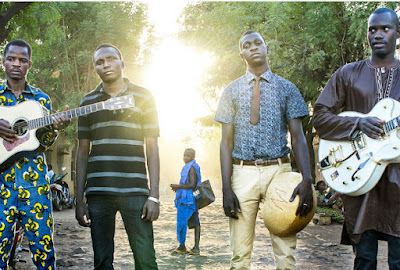 Garba Touré and his guitar were a familiar sight on the streets of Diré, a dusty town on the banks on the Niger River, upstream from Timbuktu. But when armed jihadists took control of northern Mali in the spring of 2012, he knew it was time to leave.

“The first rebel group to arrive were the MNLA, but they weren’t against music, so there was no bad feeling between them and the population,” he tells me over the phone from the Malian capital Bamako. “But then Ansar Dine [‘Followers of the Faith’ – a local armed Islamist group] came and chased them out. They ordered people to stop smoking cigarettes, drinking alcohol and playing music. Even though I don’t smoke or drink, I love the guitar, so I thought, ‘this isn’t the moment to hang around. I have to go south.’”

Like many other thousands of refugees, Garba grabbed a bag, his guitar and boarded a bus to Bamako. His father, Oumar Toure, a famous musician who had played congas for Mali’s guitar legend, Ali Farka Toure, stayed behind with the family. The hard line Islamist gunmen drove music underground. The penalties for playing or even just listening to it on your mobile were a public whipping, a stint in an overcrowded jail or worse.

“When I arrived in Bamako the mood wasn’t great,” Garba remembers, “Different army factions were fighting each other. There were guns everywhere. All we heard was the scream of weapons. We weren’t used to that.”

Garba and some other musician friends from the north decided they couldn’t succumb to the feeling that their lives had been shipwrecked by the crisis. They had to form a band, if for no other reason than to boost the morale of other refugees like them. “We wanted to recreate that lost ambiance of the north and make all the refugees relive those northern songs.”

That’s how Songhoy Blues was born. ‘Songhoy’ because Garba Toure, lead vocalist Aliou Toure and second guitarist Oumar Toure, although unrelated to each other – ‘Toure’ is the equivalent of ‘Smith’ or ‘Jones’ northern Mali – all belong to the Songhoy people, one of the main ethnicities in the north. And ‘Blues’, not only because northern Mali is the cradle of the blues and its music is often referred to as ‘the desert blues’, but also because Garba and his mates are obsessed by that distant American cousin of their own blues. “My father used to make me listen to Jimi Hendrix. He’s one of my idols. But I also listen BB King and John Lee Hooker a lot.”

After signing up drummer Nathanael Dembélé from the local conservatoire, Songhoy Blues hit the Bamako club and maquis (a kind of local spit ‘n’ grit bar restaurant) circuit with their raucous guitar anthems dedicated to peace and reconciliation. People flocked to see them, not only fellow Songhoy, but also Touareg and other northern ethnicities. Even southerners came.

Anybody familiar with the enmity between the Songhoy and Touareg peoples left behind by Mali’s recent civil war will appreciate the how inspiring it must have been to see Touareg and Songhoy youth wigging out together in a Bamako bar.

Last September, an uncle told Garba that a group of European and American musicians and producers were coming to town under the banner of Africa Express. Garba called Marc-Antoine Moreau, one of the Africa Express organisers and, after passing an informal audition, Songhoy Blues were introduced to Nick Zinner of the Yeah Yeah Yeahs, whose surname Garba pronounces Zeiner.

“Marco told us that Nick was a big American guitarist and asked us to collaborate with him. So the next day we went into the studio and did some takes with Nick. Everything went well, no problem. He’s a very simple person; a great guitarist but really modest.” The word simple is just about the greatest compliment a Malian can pay to another person. In the Malian French patois it means honest, down-to-earth and solid as a rock.

“We just walked into the studio not knowing what to expect,” Zinner recalls. “There was just one amp between all of us, so it was like ‘What are we gonna do here?’ But then they showed up, sat down, said ‘hi’, and thirty seconds later they were playing music, amazing music.”

One result of these sessions a track called ‘Soubour’ which means ‘patience’. “We’re asking the refugees to have patience,” Garba explains. “Without patience, nothing is possible.” A video of ‘Sobour’ featuring Zinner and friends has now gone viral. Is the rawest, spikiest and most electrifying dollop of desert r’n’b you’re likely to hear this year or next, but it remains proudly Malian and African.

Working with musicians who had just seen music outlawed in their homeland was humbling experience for Zinner. “It’s impossible for a westerner like myself to imagine it,” he says. “Like, truly unfathomable. And knowing the reasons why a lot of the musicians that we were working and hanging out with had come to Bamako really added another dimension to the whole experience. Like…a real intensity.”

Like the great majority of Malian Muslims, Garba has no truck with hard line Salafist attitudes to music. “The world without music? It would be like a prison, right?,” he says. “Music causes no harm and what’s more you can educate an entire population using music. Maybe in previous generations, music could have been condemned by religion, but not now.”

Africa Express has invited Songhoy Blues to London to appear at the launch of Maison des Jeunes (Transgressive), the album of recordings made last October during the Bamako trip. Songhoy Blues and other emerging Malian talents, like the seraphim-voiced Kankou Kouyate, who is also appearing at the launch, feature alongside Damon Albarn, Brian Eno, Ghostpoet, Nick Zinner and an eclectic mix of other artists and producers. To Garba and his fellow band-members, the whole experience has been like a dream that dropped out of a deep blue African sky.

“There we were living in the north,” he says. “We were told that if we played music we could get our hands chopped off. Then we arrived in Bamako, in a state of emergency. We had to go to the Ministry of the Interior to ask for permission to play. But then, by the grace of God, the atmosphere returned. Africa Express came and we were invited to play in London. Really and truly, it’s an explosive joy for us, an explosive joy! We can’t even begin to explain that joy.”