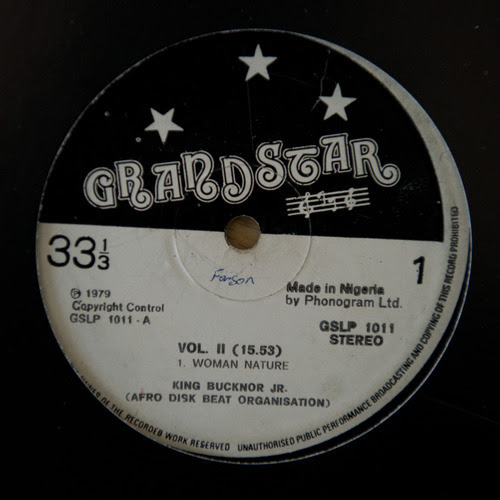 Imitation is the sincerest form of flattery, right?

The world has come to know Fela as the undisputed king of afrobeat in Nigeria during the 1970s. Along with fellow co-creator, Tony Allen, Fela Kuti completely dominated the market.  Even band like the African Brothers and Ebo Taylor in Ghana, both heavily influenced by Fela’s direction, added their own signature elements, creating afrohilli and afrofunk in the process.

Such a domination in the genre has prevented us from hearing the direct influence Fela’s sound had on his fellow nigerian musicians.  People like Joni Haastrup, Harry Mosco, and Pax Nicholas (just to name a few) - all managed to incorporate and expand upon the afrobeat sound, creating something new in the process, but where are all the imitators lurking in the mist who capitalized upon such a golden opportunity.  This record by King Bucknor and the Afro Disk Beat Organization is a prime of example of such blatant imitation.

Before I get into the actual music, I have to point out one of my lingering suspicions that this may be the work or another well-respected Nigerian funketeer - Segun Bucknor. Was it a studio creation by some label to ride the success of Fela?  Does the name give away Bucknor’s association with the recording or is simply coincidence that they share the same name? I remember when Lion and I found this record and being in utter awe of the shamelessness of it all.  So far, I haven’t been able to find any info on this band except for one other record of theirs that popped on ebay some years back.  I could be totally wrong about Segun’s role… hopefully, one of you can put my suspicions to rest.
As for the music itself, it is unabashed knockoff. Long, drawn-out intros, social ad-libs, 15-min songs that play out like any number of Africa 70’s well-known tunes. It even has kiltered Saxaphone solos right smack in the middle. Close your eyes and you would think it was a Fela session out-take.  I wouldn’t be surprised if this project grew out of a  cover band some Nigerian club hired out for their weekend nights.


GET IT!!!
Posted by Anonymous