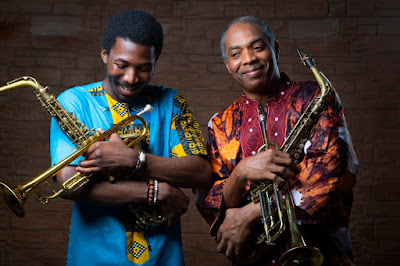 The influence of the legendary Nigerian musician and activist Fela Kuti is displayed gloriously with the next two Kuti generations connecting on this joint release. Legacy + is in fact two albums, with one each presented by father and son. Femi Kuti, Fela’s son and former Egypt 80 band member, has been a driving force of Afrobeat and the power of music to change the world for some years, but it’s Femi’s own son, Made Kuti, that now steps up to present his own vision.

As Femi was preparing his album - Stop The Hate - he invited Made, who plays bass, alto-saxophone and percussion on his dad’s album, to release his own debut record ‘For(e)ward’ alongside his own in a joint package. It’s a smart yet honestly touching move on his and the label’s part: and naturally pays dividends to the listener.

Femi Kuti’s output on Stop The Hate is relentlessly fierce and funky, and for his eleventh album there’s no easing off the pedal. Kuti Senior delivers messages of freedom and positivity that are as bold and defiant as they’ve ever been: central themes of the album focus on corruption in Nigeria’s local government, equal rights and the end of police brutality for Black people. Pure and powerful and dispatched with experience and confidence, it’s Afrobeat+ direct from the source.

On Made’s ‘For(e)ward’ album, we’re presented with a wealth of influences added to the Kuti Afrobeat formula, with the talented musician also performing everything on the record. While the hypnotic basslines, rhythms and horns inherited from previous generations are vital ingredients, Made takes more than enough turns to make this record his own.

He studied at the famed Trinity Laban Conservatoire of Music and Dance (the same place his grandfather Fela studied, back when it was known as Trinity College), while also soaking up the riches in London’s underground scene, and the city's diverse influences of club music, dub, hip hop, punk, jazz and other improvisational disciplines are audible in his music. The song’s powerful messages come from his own perspective, with the direct effects of years of political negligence and corruption, alongside sexual harassment of and inequality for women, brought to the fore.

The (Positive) Force is strong in the Kuti family. Fela would no doubt be proud of what the next generations have delivered here - one continuing to play at the top of his game, the other emerging with promise, both still fighting for the people.

The contemporary End SARS protests across Lagos come more than four decades after Fela Kuti’s Zombie album launched its musical uprising against the methods of the Nigerian militia, who responded by raiding his Kalakuta compound, burning down his studio and throwing his 77-year old mother out of a third-story window. They come four decades after Fela married 27 women on the same day, either for misogyny’s sake or to delegitimize the government’s claims that he’d kidnapped his backing band and dancers, depending on which sources you read. A life’s worth of rebellion assembles this kind of political nuance to a man whose influence seeps through Afrobeat and into the fabric of a country’s resistance.

Take the centrepiece of Tony Allen and Hugh Masekela’s Rejoice – a feverish, limbless hard-bop holding Fela’s legacy on the shoulders of a street parade: “Lagos never gonna be the same, never, without Fela!” He was Afrobeat’s originator, who mystified the concept of rebellion, combined the greatest freedom-searchers in Blue Note jazz with the euphoria of highlife and escapist groove of American funk, and peddled joy as an act of opposition. In parallel to Northern Soul’s takeover of postindustrial Britain, Fela’s rebellion mobilised a world whose resistance hit under the dense fug of igbo smoke, with a shamanic trance and an open invitation to dance away the hardship.

In the years since his death, Fela’s legacy has been joyfully upheld: his son Seun still fronts Egypt 80, Knitting Factory have meticulously reissued his solo archives and the legendary communal moments at the New Africa Shrine, while the likes of Ginger Baker, Questlove, Brian Eno and Erykah Badu have curated selections of his work alongside essays and political commentaries. As the archeological dig of a lifetime’s work continues to show the historical weight of Fela Kuti, Legacy+ adds urgency to the tradition – a double release as one, comprising Fela’s son Femi Kuti’s new album Stop The Hate and Femi’s son Made Kuti’s new album For(e)ward. It’s an instant masterpiece in supplementing the heft of a surname. The music isn’t Fela’s, but the feeling is the same, and the protest is current.

Stop The Hate is the literal father album of the collection. Lead single ‘Pà Pá Pà’ is a groove-filled checklist (“I want you to listen to me well”) and its scope is extraordinary. Femi calls for structural and social change in government; the need for clean water, safer roads and working electricity is demanded in the same breath as gender equality and continued resistance against corruption. Circular grooves lock on key lyrics: “Stop the hate” and “Stop the land grab” sound the visceral frontlines of protest, while the organ-laden, trumpet-heavy ‘Na Bigmanism Spoil Government’ stands with a vicious, Fela-worthy critique of power.

Made’s contribution on For(e)ward swirls into the mental strains of resistance. The hypnotic locked groove – “free your mind and set your soul free” – picks up from the closing track of his father’s album, but the message after three minutes of mesmeric, sprawling future-Afrobeat holds a demand for freedom that you won’t find on Stop The Hate. Made plays every instrument on the album; ‘Your Enemy’ and ‘Higher You’ll Find’ become possessive with spiralling horns, instrumentals and brass cacophonies that conjure an internal Fantasia. As Tony Allen went on to reject lyrical content to find his loose-limbed percussive protest, For(e)ward conjures as much of a tempest with furious strums and astral horns as it does with words.

Subjects cross between albums; Femi’s ‘Young Boy Young Girl’ is the utopia that Made’s ‘Young Lady’ longs for, uncovering the sexual scandals at the University of Lagos. The wide-eyed circle jams of Made’s ‘We Are Strong’ look to solve the same injustices lamented in Femi’s ‘You Can’t Fight Corruption With Corruption’. The most striking moment in Legacy+ is Made’s monologue in ‘Different Streets’ to the somber effect of ‘Sorrow Tears and Blood’, ruminating on Fela’s message: “Grandpa was not predicting the future… we must now understand just how scary it is that we are facing the same problem from the ’70s, and think for ourselves how hard we must work collectively to be free.”

On their own terms, neither body of work is starkly more enthralling than its contemporaries. Yet what makes Legacy+ such a remarkable collection is how each album brings vibrance to the other and revitalises Fela’s archived resistance. There’s something in the family name that feels as vital now as it did forty years ago. 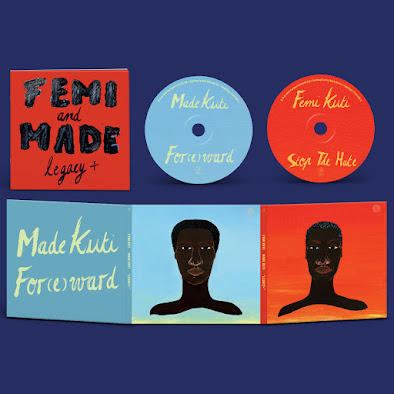