An excursion into Namibian hip hop: Black Vulcanite (for free) 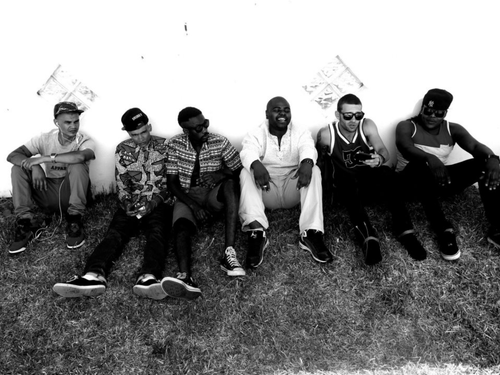 The first time that I wandered into Black Vulcanite’s dormitory of music was during mid-summer last year when I saw a post from one of my Facebook friend’s raving about their music and how they were ‘….so different from the rest’. Being the intuitive music head that I am I decided on following my gut as I had a feeling that they might suprise me. I Google’d them and one of the search results led me to a link where I could download their “Remember The Future” for FREE @ bandcamp!

I must admit, I was a bit wary at first, I mean who puts out a free EP with good music on it these days? Everything is commercialised and artists are trying to cash in on their art but they took the pro bono route in a bid to, presumably, market themselves. Whatever their reason was it certainly worked on me and the very moment that I first lent my ears to the opening track “Black Narcissism” I was instantly hooked, it was like love at first sight, or in this case love at first listen. I can write an infinite number of pages drooling over why their music is captivating but I’ll give you one good description that does justice to their music, it’s starkly stupendous! In an age where Hip Hop has grown to be increasingly dominated by irrelevant and senseless lyrics that are being churned out by egotistic, high on vanity and self-consumed rappers, Black Vulcanite’s music is refreshingly unique.

The group is formed up by three members who are close allies in their quest to change the face of Hip Hop, which is what I believe they’re doing. Mark Question, real name Mark Mushiva, is the lyrical genius of the group. His bars enthuse an admirable sense of knowledge on science, history and pride themselves on black consciousness. He’s like the Steve Biko, Albert Einstein, Amiri Baraka, Mark Twain, Mahatma Gandhi, Sin Tzu, Tupac and Hendrick Witbooi all rounded up and moulded into one warrior, a warrior of words. When a rapper churns our dope verses such as: “I am the only Asian in this class with a space suit,” (listen to “I hope They Write”) or “…this game is something like Sudoku in a kid’s brain,” (listen to “Drinking Life”) then you know that his IQ is as worthy as that of any intellectual great and his philosophy is quite mesmerising. Mark uses his intellectual knowledge to suit his ethos and take a stance in society which many people have ignored since the attainment of our freedom.

And really that’s what their EP, “Remember The Future”, is all about. It’s nothing short of a time capsule that captures your conscience and gives you a mind-opening tour into the past while whisking you back to the present thereby reminding one to be mindful of the past deeds that define us as Namibians and as Africans. Notwithstanding the fact that it encourages us to also look towards the future with hope and optimism but with the memory of our past safely tucked away in our hearts and minds as our reference point.

It’s quite poetic isn’t it? This brings me to the other member of the group Okin, real name Nikolai Tjongarero, who pleases the listener with his gravel yet silky voice. Okin commands attention when he reads out his lines with striking poise, lines that depict the conflicts within our minds and the everyday life encounters that play a pivotal role in our existence as superior creatures of creation. “….for those that spoke to his mind never really spoke to his heart” the poem goes in “Black Narcissism”. Okin’s poems are quite philosophic; he’s clearly an observer and is aware of the great battles that we face in life, especially the battles that have enslaved our minds. Whether he is describing the “Lady in The Blue Dress” or how friends turn to enemies in “That’s how I feel” he does it with vocal poise. He just doesn’t warn us of the paths that we should try to avoid and the ones that we ought to seek in life either, he also gets creative and charms the ladies, making them completely vulnerable to his soft hitting words and giving the fellas something to dedicate to their equal halves. He’s a smooth operator and a testament to that description is how he describes his encounter with a lady in “Nostalgia”. Okin is rightly so the poet within the group.

“Corruption and incompetence [is] evident in our government, [They] claim it’s for the people but [they] do it for their own betterment.” Is the captivating line within “Visions” by AliThatDude, who’s real name is Alain Villet. Ali’s musical persona is distinct in that it he can translocate his vocal skills from being a straight out hard flow, and he has an impeccable flow at that, rapper to spitting out ragga like verses (listen to their new single “Big Egos”). Ali puts the fun in rap as he makes it seem easy to spit the way that he does. He’s very descriptive and one can feel that he visualizes things in his lyrics and that builds a personal feel with the listener because it’s almost if you are with him when he describes how he takes a flight to Jupiter but promises his girl that he will be back before the daylight (listen to “Cosmic Symphony”). He’s also an exceptional vocalist. Ali is evidently high on life and his laid back approach to songs is refreshing cos really, why be stuck up by being primarily serious when you can be that (serious but not stuck-up) and still have a good time while at it? That’s why their music conscientizes the youth in a fun and interesting way.

All in all, the group is young and dynamic and definitely has a great future ahead of it. The only reason I’m raving about them is because they are my only refuge from the usual crap that we are sold these days. I must admit I’m an old school Hip Hop head, I was born in the era where real Hip Hop thrived, way before Nas declared Hip Hop dead. I’m glad that there’s a new emerging group of socially conscious artists such as Black Vulcanite that are taking the lead and sowing the seeds that will provide the game with more variety and encourage cats to cease with their shallow lyrics and be more competitive and smart lyricists.

Artists like Public Enemy were vocal about many issues such as racism and police brutality and they used Hip Hop as tool to express their disapproval of such brutal acts and give a voice to the voiceless. Birthed by the youth within the black communities Hip Hop became a way of life for many teenagers; they were craving for self-expression and trying to elevate their self-worth by being recognised. They knew that they had acquired the status of being menaces to society but they also knew that music and art was one of the only platforms that they could seek solace in and refuge from their troubles and try to make something out of their lives without giving in to the harsh judgments and the stereotypes. Hip Hop artists like the Notorious BIG were musical portraitist, the real Picasso’s and Basquiat’s of rap music.

Many might say that I have unrealistic expectations and so forth but really I’m not proud of the direction that Hip Hop has been taking these couple of years. I understand the fact that as a new era we ought to set an identity for ourselves but we should be careful not to let this infringe upon the core values of the game. And shouldn’t we hold high expectations in the first place? Low expectations are boring and nothing is unrealistic in this game unless you’re aiming low. Black Vulcanite has impressed me; it’s music resonates well with that era, it is aware of the post-independence issues that face the nation, most especially the youth, and it sings about it which is something that many artists nowadays rarely do. The only time they do is to score cheap publicity stunts to elevate themselves within the minds of the people.

Listening to the Hip Hop lyrics of today is a brainwashing endeavour. They promote materialism, drug use, violence and glorify attaining and amassing wealth as the sole purpose to life while ignoring the fact that people in their communities are facing many hardships. “I’ve got money” or “I’ve got a 100 b!tches” is all you hear from them and many of my peers, unfortunately, still continue to bump to it like its some sort of mediocre mediation technique. They’re being sold a dream, particularly the American dream, a dream of instant riches and fame not knowing that that very dream is the source of pain for many celebrities who are stuck in their apparent ‘ideal’ lives. Fame is overrated and the new Black Vulcanite jam, which they performed to a packed crowd at the FNCC recently, “Hollywood Is Dead”, highlights that notion. There’s nothing retrogressive about cats who are sticking to the principles laid down by the ‘old school’ and I’m not saying that we can’t bend the rules all I’m saying is that if you’re going to bend them don’t look stupid while doing it. Be creative, break out of the box but ALWAYS stay relevant.

Apart form shifting the spotlight to the issues that affected them and their communities these artists were poets and lyrical maestros, they could flow. If you put French Montana or Trinidad James in that era the only position they would hold in the Hip Hop industry is nada. Eminem once sang about how people are rarely interested in listening to the lyrics of a song no more, its all about the beat and chokingly yelling once lungs out like Waka Flaka Flame or Trinidad James gasping for air. But within this whole dark Hip Hop dilemma is a glimmer of hope, artists like J. Cole and Kendrick Lamar, to mention a few, are enjoying commercial success but still staying relevant and loyal to their craft and to the streets. In fact Kendrick Lamar is making great strides, the Compton emcee gained much popularity over the web lately for his hot verse on Big Sean’s joint “Control” where he calls out all his ‘competitors’ to step up their games and cease with the mediocrity.

Locally artists like Brain The Tool and That Boy Jay are also marching to the same tune and dropping sick mixtapes (Check out their projects: “Black Boy Experience” and the “Leo Manuscript” respectively). Continentally rappers like Zeus, Youngsta, OutSpoken, Tumi, Optical III and a whole bunch of others are also taking the lead and trying to form an identity for African Hip Hop, one which is not highly influenced by Western culture. I see a few of my peers are responding to this form of Hip Hop and realise that there’s more to music than just singing about p*ssy, fame or cars. I hope that none of the Hip Hop artists or groups that I bump to today fall victim to the pressures of commercialisation of music which distorts their musical maxims and detaches them from their initial goal because I place high expectations on them. In the meantime do your ears an ‘eargasm’ of a favour and check out Black Vulcanite’s “Remember The Future” EP and their recent singles, I’m a 110% sure that you’ll be held captive by their creative minds. 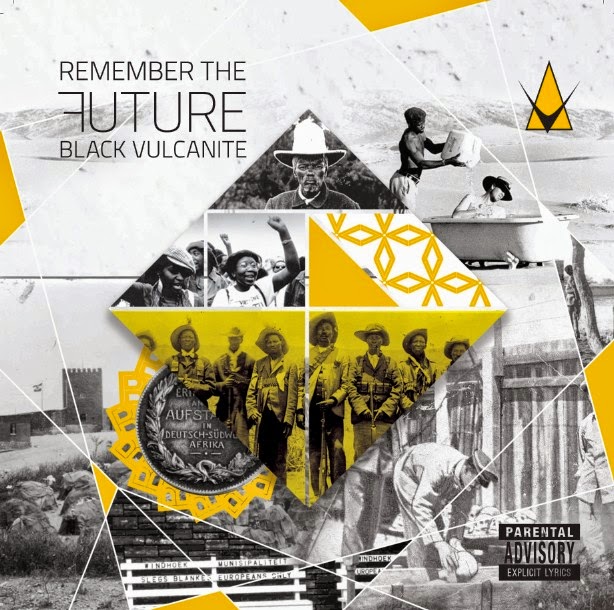